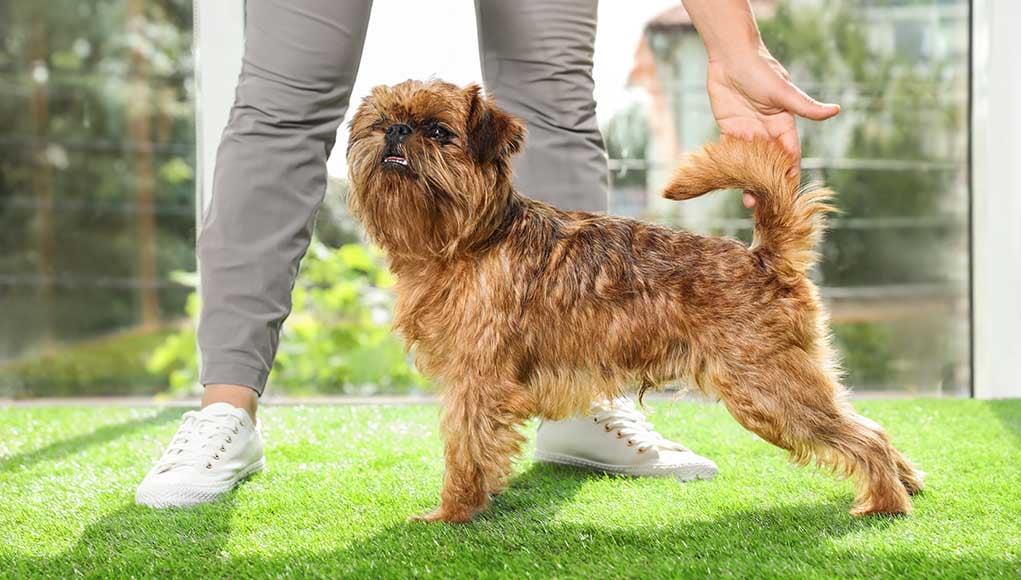 Brussels Griffons are adorable little dogs with big personalities. Made popular by the movie, “As Good As It Gets,” they are easily recognizable by their long beards. The Brussels Griffon is a sensitive, smart dog that can make a great companion for someone who is home often and won’t have the need to leave their little buddy all alone for too long. 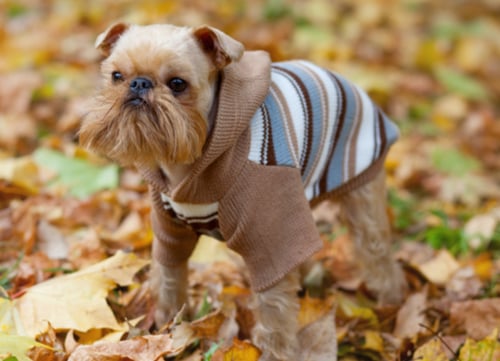 The word “Griffon” may sound familiar because there are actually two other Griffon breeds: the Belgian and the Petit. In comparison to the Belgian Griffin, both have wiry coats, but the coat of the Brussels is shorter, although still shaggy. The Petit Griffon has the shortest coat of all, and it is smooth instead of wiry.

As its name suggests, the Brussels Griffon has a history that dates back to 19th Century Brussels. They were actually used by horse-drawn cab drivers to rid their stables of rats and other vermin. The dogs were so fond of their human owners that they became more of a companion breed, riding in the cab along with them. The Brussels Griffon is believed to actually be a variety of other breeds that the cab drivers used to perfect them into the ideal dog. These include the English Toy Spaniel, Affenpinscher, Pug and Yorkshire Terrier, among others. However, there is no written proof of any breeding records.

The breed became official in Belgium when Queen Henrietta Maria developed a fondness for the dog. Royal kennel keepers and upperclassmen refined the breed even further, making the face more like a human’s and making the body even smaller. The result is what you see in a Brussels Griffon today. Eventually, the Brussels Griffon made it to America, where it was first registered by the AKC in 1910.

In America, the Brussels Griffon is a difficult breed to find as they aren’t as common as other toy breeds. 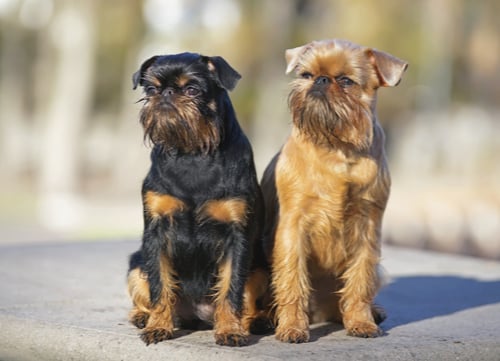 The Brussels Griffon has a very unique look, with it’s adorable beard, pointy little ears and big brown eyes. They come in four different colors: belge (which is a combination of black and reddish-brown), all black, all red, or black and tan. Although they have a small body, averaging 8 inches at the shoulder and weighing an average of 9 pounds, they’re sturdy little dogs with round heads and a short muzzle. Some people say they look like Ewoks from the Star Wars franchise. Their tail is typically docked to one-third of its natural length, and their ears are cropped to be short and pointy. However, docking of tails and cropping of ears is illegal in some parts of the world, so you may see Brussels Griffons that look completely different from their standard appearance. 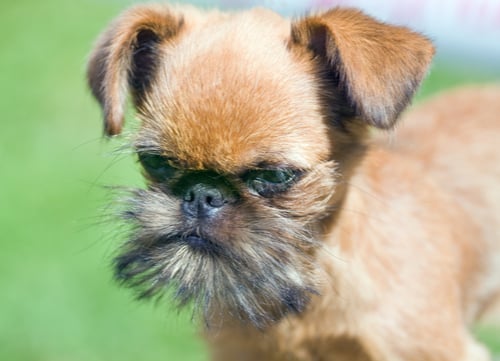 For someone looking for a smart, happy, affectionate, curious, charming dog, the Brussels Griffon is the perfect companion. They’re even good with other dogs and cats in the house. There are a few things to keep in mind, however. First, they don’t like to be left alone for too long, as they bond with their humans quite strongly. Second, they should not be fed table scraps, just like any dog. But with the Brussels Griffon, they can become very picky with their food if they get a taste of human food. Third, they have a reputation for being difficult to housebreak. Consistency and patience are key traits for their human owners.

The Brussels Griffon is also susceptible to something experts like to call Small Dog Syndrome. This happens when you have a cute, human-looking dog who excels at charming its owners into getting whatever it wants. When it feels like it is the center of attention, it starts to believe it is the pack leader in the home. This should be prevented at all costs, since it can cause behavioral issues that involve excessive barking, separation anxiety and resource guarding. For this reason, the Brussels Griffon needs an owner who knows where to draw the line and not fall for its charming nature. They will be perfectly happy if they get enough mental stimulation, such as learning new tricks. Regular exercise helps too.

There’s no need to spoil the Brussels Griffon, or you’ll end up turning it into a completely different dog with characteristics that aren’t typical of the breed. 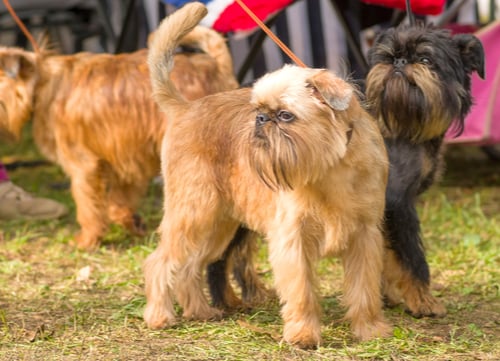 As happy as a Brussels Griffon might seem lying next to you on the couch, they actually need at least 30 minutes of moderate exercise daily. Walks work fine, but they love playing with their humans most. Playing fetch with a ball is ideal, as are canine events like agility, obedience and tracking. 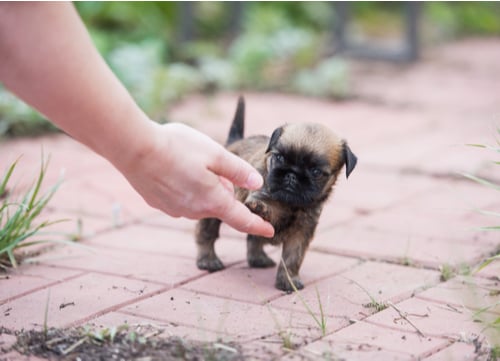 Brussels Griffons are typically healthy dogs if obtained from a responsible breeder. However, due to the Griffon’s flat face, they are prone to breathing problems in hot or humid weather. They also tend to snore when sleeping. Like all dogs, regular tooth brushing is important as well.  A healthy Brussels Griffon can live between 12 and 15 years.

The rough-coated Brussels Griffon does not shed. It has a rough outer coat, with a soft undercoat that helps keep it warm. It needs to be groomed regularly and have a weekly brushing. Here is a how-to video for this breed. Groomers typically clip the hair short, but leave the distinctive beard long. Owners should brush the beard regularly and keep it clean, especially if the dog ever eats wet food. The groomer should also be sure to pick and clean the ear canal hair in order to prevent ear infections. 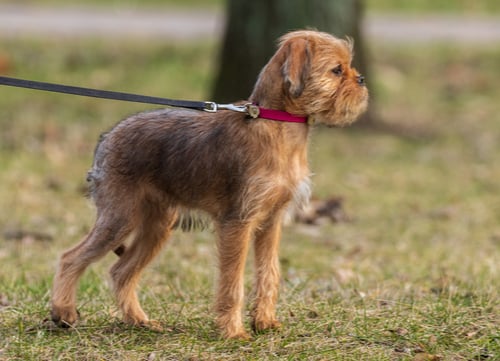 Brussels Griffons are known to be easy to train, due to their intelligence as well as the strong bond they form with their owners. They are naturally eager to please. Again, however, housebreaking seems to be an exception to this, as it tends to be with many small breeds. They are very sensitive to harsh criticism from their owners, so it is important for owners to show patience. This will eventually ensure the Griffon housebreaks quicker than they otherwise would with negative reinforcement.

Keeping in mind that Brussels Griffons love to follow their owners around the house, this breed would be a great match for someone who is home a lot. They are also good with kids, providing children are gentle with them. Smart and charming, the Brussels Griffon makes a great pet, if you can find one.

Read Next: 17 Small Dog Breeds That Are Good With Kids 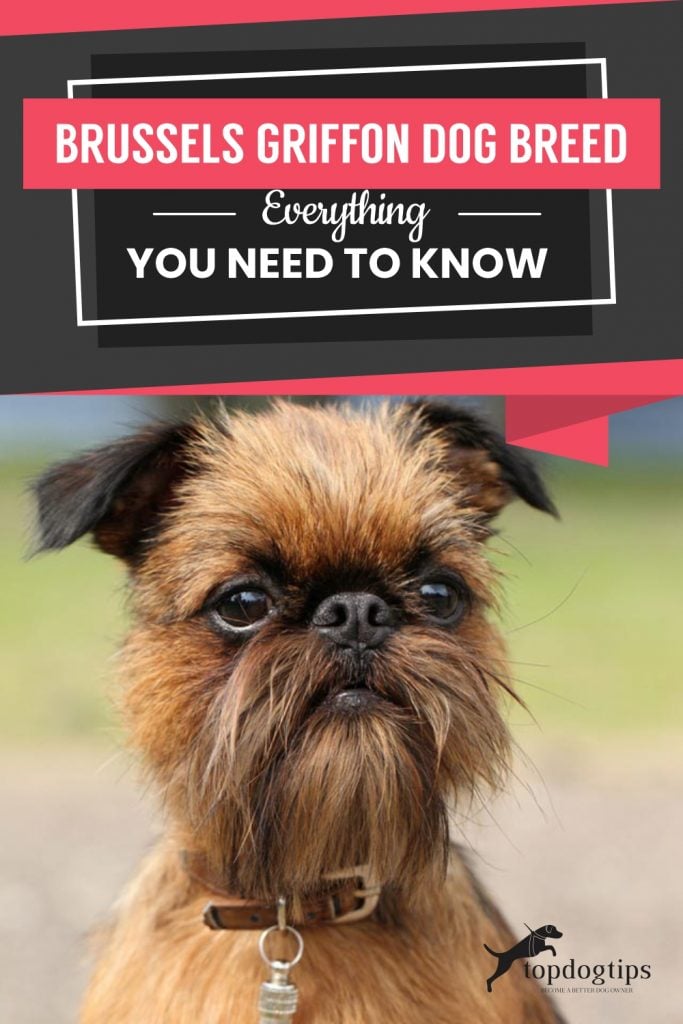 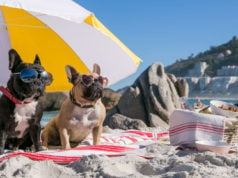 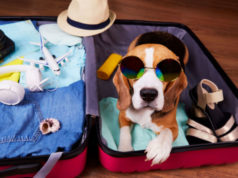 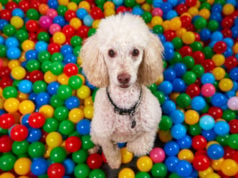 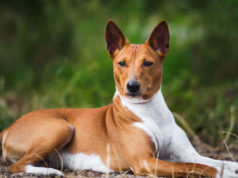