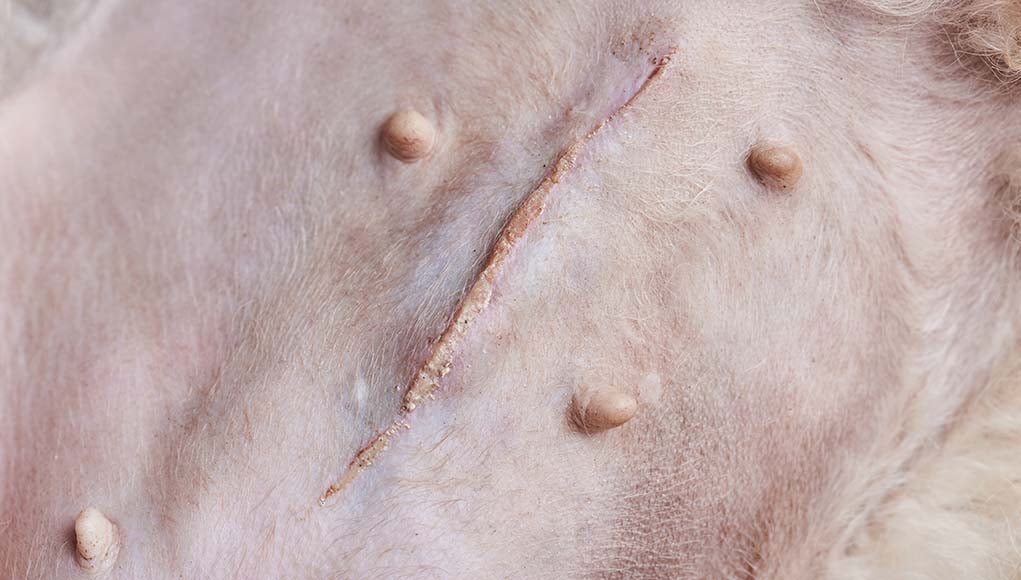 What dog pyometra is, it's a bacterial infection that results in an abscessed, pus-filled uterus that occurs in female dogs that have not been spayed. Pyometra in dogs comes on quickly and escalates rapidly. Toxins and bacteria from the infection leak into the dog’s bloodstream, which is life-threatening. If the dog is not treated immediately, her uterus will rupture or die, causing all of the pus and dead tissue to be released into her abdomen, which will result in sepsis, and oftentimes death.

Failing to spay a female dog causes pyometra because when a dog has not been spayed, each time she goes through a heat cycle, her uterine lining becomes engorged in order to prepare for pregnancy.

Over time, the engorgement of uterine tissue becomes excessively built up inside of the female dog, and creates a prime breeding ground for the bacteria and infection to develop within the dog.

During her heat cycle the dog’s cervix opens up to allow sperm inside. This opening creates the perfect opportunity for the multitude of bacteria that is located in and around the vaginal area to easily travel up into the dog’s uterus, causing the engorged uterus lining to become infected and full of puss.

Pyometra is most commonly seen in dogs who have gone through multiple heat cycles, and will often appear approximately two months after the dog was in heat. You can read about this in greater details in the following two articles: this one from a VetWest Animal Hospitals, and this one from veterinarian Wendy Brooks, DABVP, written for Veterinary Information Network.

How Long Can a Dog Live with Pyometra?

If pyometra is not caught and treated in the early stages of the infection, the female dog’s uterus will rupture, causing the pus to fill the abdomen. If this happens, the prognosis is poor, and the animal will have only 24 to 48 hours to live if not properly and effectively treated.

How Much Does the Surgery for Dog Pyometra Cost?

The cost will vary depending on where you take your pooch to be treated, but the average cost of the emergency surgery to remove the dog’s uterus and ovaries can be anywhere from $1,000 to $2,000 or sometimes more. This price does not include pre- or post-operation care and medication costs.

Symptoms of Pyometra in Dogs

The most common signs your pup may have pyometra are:

In cases of open-pyometra, the dog’s cervix is open and a yellow or bloody colored, odorous vaginal discharge is usually apparent. Licensed veterinarians can collect a sample of the discharge and examine it for abnormalities using a microscope.

In cases of closed-pyometra, the dog’s cervix is closed and there will be no vaginal discharge, causing this form of pyometra to be more difficult to diagnose.

I recommend to read the following detailed article published by Vets Now, for further information regarding symptoms and diagnosis of canine pyometra.

Treatments for Open-Pyometra in Dogs 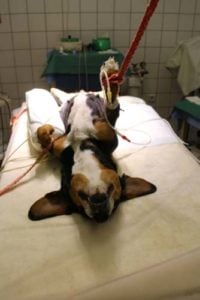 There are three ways to treat open-pyometra in dogs: surgical procedure, prostaglandin injections, and oxytocin and ergot derivatives injections. Here's what you should know about these three:

This surgery can be expensive and dangerous due to the fact that the toxic materials in the uterus can leak, and spill into other areas of the body. Antibiotics are given during and oftentimes after surgery. The dog will usually need to stay in the hospital to be monitored and receive pain medication, for at least a few days post-operation.

This is a less common treatment for pyometra that can allow the dog to remain capable of reproduction, as her uterus and ovaries are not removed with this treatment. The dog is given hormone injections that will cause her uterus to contract and hopefully release the pus.

Chances of a dog having a successful pregnancy are greatly reduced after she has had pyometra. Therefore an ovariohysterectomy is always recommended, as pyometra will often reoccur without the surgery.

Injections of these classes of drugs have been shown to produce the strongest and shortest-lasting contractions in the dog’s uterus with the aim of expelling the pus.

This treatment is especially dangerous, however, because it can result in the pus being pushed through the uterine tubes and into the dog’s abdomen, or cause the walls of the uterus to rupture, both of which would cause all of the toxins to be released into her body, likely resulting in death. And all treatments that force the dog’s uterus to contract are very painful for her.

Treatments for Closed-Pyometra in Dogs

There are only two ways to deal with closed-pyometra in dogs, and these are surgery and antiprogestin-based medication. Here's what you should know about these two options:

This is the same surgery described in option number one, for cases of open-pyometra. In cases of closed-pyometra, surgery is also the most common and many times the only treatment option, because the dog’s cervix is not open it is impossible for the pus to drain out of the body by way of forced uterine contractions.

Giving the dog an antiprogestin-based drug will sometimes cause her cervix to open, allowing the pus to drain out of the uterus. This option will take at least 9 days to begin working, with only a 20% success rate reported on day 9. 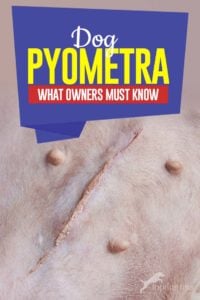 If the dog is able to survive the infection until day 28, a 90% success rate has been reported in cases in which the dog was given 5 doses of an antiprogestin-based drug, which must be spread out over the 28 days. Dogs that present with liver or kidney problems are not candidates for this treatment option.

How to Prevent Dog Pyometra

The only way to prevent dog pyometra is by spaying your female canine. This also prevents the dog from developing breast cancer or having unplanned pregnancies, as well as some other benefits. It is also much less expensive and less risky to have a healthy dog spayed, than to have the emergency spay surgery performed on a dog with pyometra.

READ NEXT: 7 Tips on How to Prepare for Your Dog’s Pregnancy