A group of researchers in the U.S. and France have developed gene therapy which restores canine muscle function and extends the lifespan of dogs affected with the fatal muscular disorder called myotubular myopathy.

A team of researchers in France, together with scientists from the University of Washington and Harvard Medical School, have brought medicine one step closer toward treating and curing myotubular myopathy in dogs and humans.

Myotubular myopathy is a rare, sex-linked genetic condition. Only male humans and male dogs get this disorder. In canines, it is found only in Labrador Retrievers. It is caused by mutations in the gene of skeletal muscles responsible for movement.

This condition is eventually fatal, causing severe impairment to the dog’s gait.

Myotubular myopathy appears to be very recent in origin. It is isolated and rare; currently, it only affects dogs from Western Canada. In humans, it affects 1 in 50,000 newborn boys. At this time, there is no effective treatment for the disease.

The study, published in Molecular Therapy journal, was led by Dr. Ana Buj-Bello (Genethon/Inserm), and they successfully administered a therepetic vector via intravenous injection, thereby identifying the dose that restores muscle function.

The Genethon team developed a vector which was able to deliver a normal copy of the MTM1 gene (whose abnormality causes this disorder). They administered it with an intravenous injection, instead of using the locoregional administration method used in previous studies (published in Science Translational Medicine in 2014).

Locoregional administration is injecting something into the specific area of the body that's being affected (typically into the muscle tissue).

The product was administered to affected puppies who were ten weeks old and manifesting the first symptoms of myotubular myopathy.

Repeated treatments were observed to restore muscle strength and function in the dogs, and prolong the life of each dog as well.

Affected dogs being treated were found to be indistinguishable from unaffected animals 9 months after injection.

For a disease which was previously 100% fatal, with no known treatment, this is one giant step toward clinical trials in patients – which means it is one step closer toward a cure. 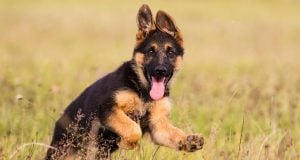