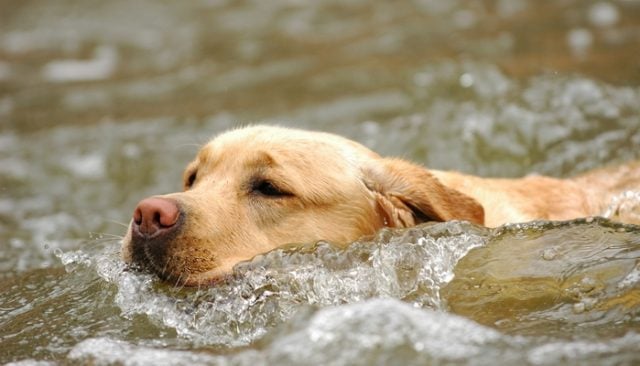 It all started when a vandal intruded into Storm’s seaside home in Hastings, Sussex and damaged a part of the fence. Storm is a 7-year-old German shepherd. This had been the dog’s home since he was adopted 7 months earlier by Helen Sygrave. The angry dog gave chase and was so intent in his pursuit of the intruder that he got lost.

Helen was upset when Storm didn’t come home that night. Her family looked for the dog in the neighborhood but he could not be found. They asked for the help of their neighbors, friends, and even friends of friends. Someone sent out an appeal online via doglost.co.uk for more help. Soon enough, a town-wide search was on for Storm.

RELATED: 10 Tips on How to Keep Your Dog From Running Away

People reported sightings of Storm on the streets, but it turned out that it was not as simple catching him. After an unsuccessful search of the neighborhood, they received a call from workmen saying that Storm was seen on the Harbour Arms chasing seagulls.

This shifted the search from the land to a search on the shore, and eventually, the sea. Succeeding reports suggested that Storm ran after a bird toward the water. This prompted one of the search team members to call the Royal National Lifeboat Institution (RNLI) for search and rescue assistance in the sea.

At that point, Storm had already been lost for four days, so it’s logical to assume that if he was still alive, he’d be exhausted. If he indeed went into the water after the bird, then there’s a high possibility that his life was in danger. Helen’s youngest daughter was inconsolable, especially when it seemed that the hope of seeing Storm again was beginning to dim. The people who volunteered to help in the search didn’t give up, though.

RELATED: Dog Safety: Why Your Dog Needs a GPS Tracker

They continued to scour the shore, keeping watch of any report from the sea search. But it must have been Storm’s lucky day, because the RNLI search and rescue team found him!

Amazingly, the dog had made it about a mile out to sea!

The lifeboat brought him to the shore. He was clearly exhausted, cold and dehydrated, and definitely needed immediate medical attention. Helen’s family and some members of the search team were there to meet Storm and the lifeboat crew headed by Coxswain Steve Warne.

Apparently, an undercurrent caught Storm when he dove for the bird. The current swept him farther out to sea. It was quite unbelievable that he was still alive when they found him, because it was a good 1-mile swim from the shore. Warne said that it was pure luck rather than judgment that led them to find Storm.

Helen and her daughter had only a few minutes to see Storm because he had to be taken to a vet for treatment. The family could not thank the people enough for going the extra mile to save a dog. She was beyond herself in saying how grateful her family was to everyone who searched the streets and the shores, the workmen who took time to promptly notify them and the RNLI and its men who took action at such short notice.