Fleas are small parasites that feed on the blood of a host animal. Host animals include mammals and birds. As large as 3 millimeters in length, fleas use a two-part mouthpiece to pierce the skin of their host animal to feed. During feeding, disease can be passed from the flea to the host animal.

What many pet owners don't know is that it's possible for fleas to take enough blood from a host animal to kill them. Within 5 minutes of landing on their host, more than 50% of fleas will begin feeding. Within 24-36 hours following feeding, the female flea will begin laying eggs.

Fleas can be contracted via dormant flea pupa in a vacant property or through exposure to a flea infestation. In layman's terms, your dog can pick up fleas from another pet or an environment where fleas are present.

VIDEO GUIDE: How to Remove Fleas From A Dog 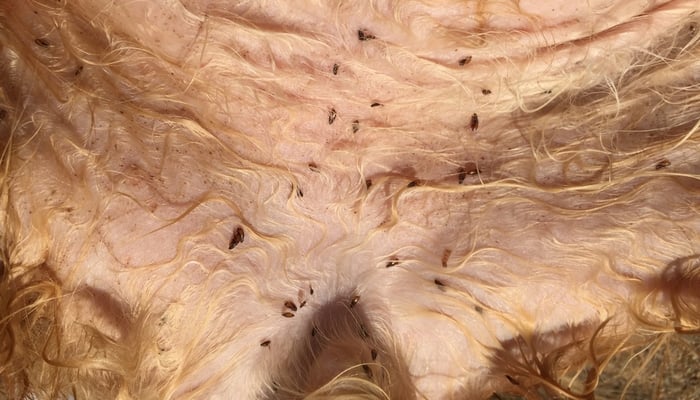 A flea can lay as many as 50 eggs every day. Depending on the environment, flea eggs can hatch as quickly as 36 hours or it can take as long as 6 days. 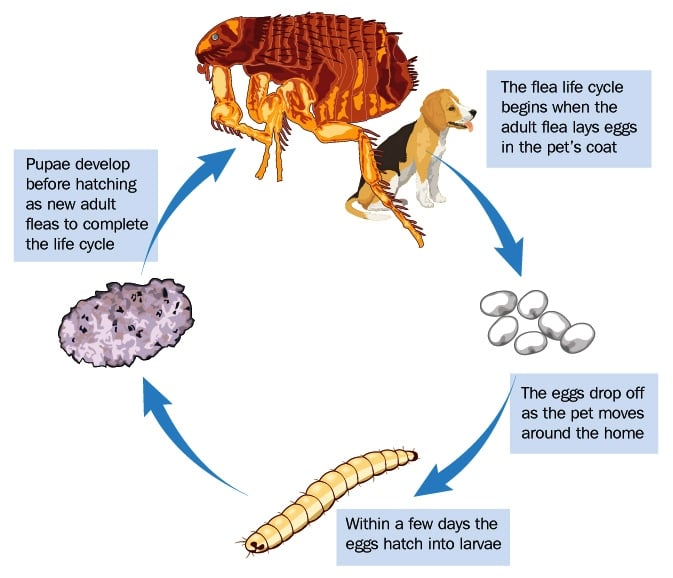 Flea eggs are exceptionally small and this is one of the reasons why it can be so difficult to control a flea infestation. These small eggs get hidden in animal fur and buried in the carpet.

Newly hatched fleas are called larvae. For two weeks, a larva will feed on organic matter and waste of adult fleas. After this period, these larvae will spin a cocoon. 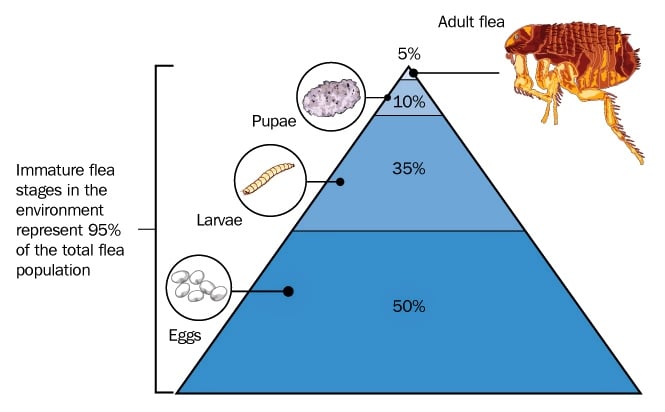 Once inside a cocoon, a flea larva is called a pupa. After a week to 10 days, a pupa is a fully developed adult flea. This adult flea will not hatch, however, until a possible host animal passes by.

These pupae can survive in their cocoons for long periods. This is why environments can be flea infested even without the presence of a host animal.

Body heat, breath, vibrations, and movement help a flea to detect the presence of a host animal. When these things are present, the pupae will hatch and attach themselves to the host animal.

What Dangers do Fleas Pose to Your Dog?

Flea allergies or flea allergy dermatitis is an allergic reaction to the feces, exoskeleton, or saliva of fleas. Dogs with a flea allergy have swelling and redness of the skin, itching, flaky skin, and even weeping sores.

Flea allergies can affect humans as well as dogs.

Tapeworm eggs make a good food source for adult fleas. When an adult flea eats one of these eggs, the young tapeworm takes up residence inside the flea. A host animal (your dog) then bites at their skin to relieve itching and consumes the flea.

At this point, the tapeworm develops inside the host animal and grows into an adult tapeworm. Adult tapeworms are contagious as they shed eggs through a host animal’s feces. 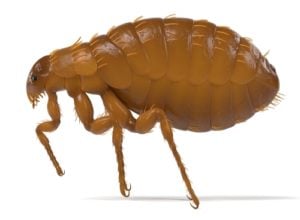 e is caused by the Bartonella henselae bacteria, which can be transmitted via flea bites. This bacterium can also be spread from infected dogs to humans through dog bites.

Symptoms of cat scratch disease include vomiting, diarrhea, fever, spleen swelling, swelling of the liver, inflammation of the cardiac musculature, seizures, and inflammation in the brain.

Symptoms of the plague include:

It is possible for a dog infected with the plague to infect a human via bodily fluids.

Finally, severe flea infestations can result in a significant loss of red blood cells and consequently, anemia. Mild anemia can be managed and reversed with veterinary care, but severe anemia is life threatening. Signs of anemia include:

ALSO READ: The 50 Best Flea Treatments for Dogs (as chosen by pet owners) 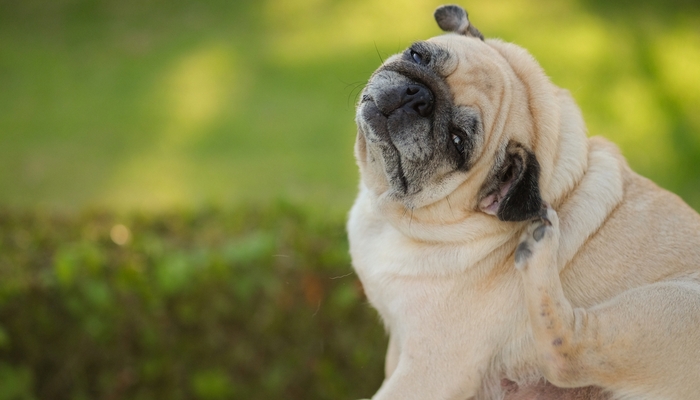 Toxic to fleas, these chemicals can also be toxic to household pets if ingested.

There are also natural alternatives to commercial chemical-based flea preventatives. Some of these options include: 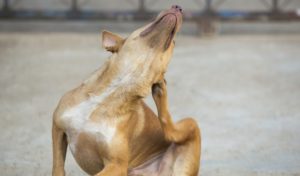 Eliminating fleas is a multi-step process. You have to begin by treating your pet’s flea infestation. Once your pet is treated, sweep and thoroughly vacuum your floors and furniture.

While no one else is at home, use a flea treatment throughout your home and in your yard to kill any fleas. Wash all items in your home in hot water to rid them of fleas and flea eggs. In three weeks, repeat this thorough cleaning process to ensure that any flea eggs that escaped your first cleaning are eliminated.

If you're interested in recommendations for products that will help you eliminate a flea infestation in your home, we've got a lot of suggestions. From natural remedies to flea powders and sprays, you'll find lots of information here on Top Dog Tips: 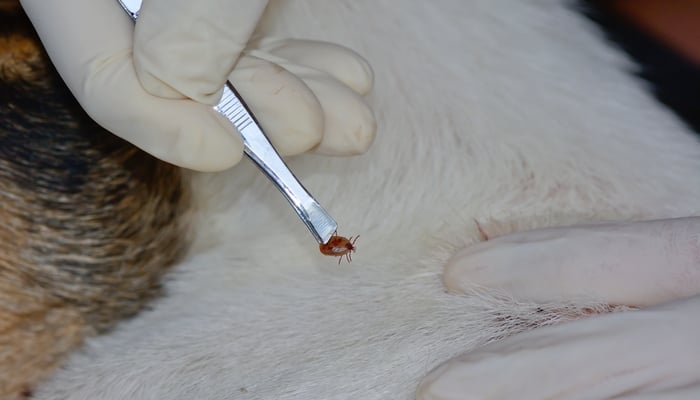 An Introduction to Ticks

Ticks are arachnid parasites that feed on the blood of a host animal. Host animals include mammals, birds, amphibians, and reptiles. There are both “hard ticks” and “soft ticks”, so named because of their body structure. Most of the ticks found on domesticated dogs are “hard ticks” or “Ixodidae”.

Once a tick climbs onto a host animal it will begin feeding within ten minutes to two hours. The tick will feed until it increases its body weight by 200 to 600 times, this can take days or weeks. Once engorged, the tick then falls off the host.

The female Ixodidae tick lays eggs on the ground. One tick can lay as many as 3,000 eggs.

When the tick eggs hatch, young tick larva emerges and feeds on small hosts like rabbits and birds. After feeding, the tick larva falls off the host. 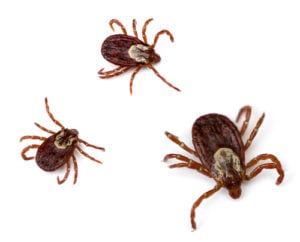 The tick nymph that falls off the host animal molts and becomes an adult tick.

Adult ticks seek out even larger host animals to feed on. The female adult tick feeds until she is engorged, mates with the male tick while on the host animal and then falls off the host and lays her eggs on the ground.

The male adult tick feeds seldom, but takes up residence on the host animal in hopes of mating with a female tick.

What Dangers do Ticks Pose to Your Dog?

In addition to anemia and cat scratch disease, ticks can transmit other serious diseases too including:

Lyme disease is spread to dogs via infected tick bites. Most commonly it is the hard-shelled deer tick that transmits Lyme disease. The disease is not usually contracted until a few days after the tick attaches to the host animal.

Symptoms of Lyme disease in dogs include joint inflammation, loss of appetite, depression, swelling in the joints, lameness, fever, and swelling around the bite. Lyme disease does not cause symptoms in all dogs, but if it goes untreated it can cause organ failure and death. Researchers don’t believe that dogs can transmit Lyme disease to humans, however, humans can get Lyme disease from infected ticks too.

Symptoms of Ehrlichiosis begin 1 to 3 weeks after a tick bite and include:

If a dog is unable to fight off the Ehrlichiosis infection, they may then begin showing signs of anemia. This subclinical phase of infection can last for years where bacteria thrive in the spleen.

If a dog is unable to eliminate the bacteria from their body at this point, they become chronically ill with symptoms common to leukemia. These symptoms may cause additional complications or continue to relapse and remit.

Humans cannot catch Ehrlichiosis from dogs, but they can contract it from at least one strain of tick that infects dogs.

Found most often on the East Coast, Rocky Mountain Spotted Fever is transmitted through the bite of an infected tick. It takes between 5 to 20 hours for this disease to be transmitted after a tick bite.

When first infected, dogs may not show any signs of infection and can overcome it without treatment. If the dog does not recover, they may show signs of:

Symptoms may then progress to renal failure or even death. Humans cannot catch Rocky Mountain Spotted Fever from dogs, but they can contract it from infected ticks.

Ticks are most frequently contracted by moving through areas where these little pests thrive, like woodlands. The tick climbs on to their host via their skin or clothing and takes hold to feed. Ticks do not jump from host to host or from vegetation on to their host. 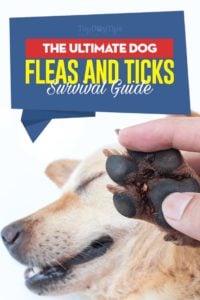 Tick preventatives come in spot treatments, tick collars and sprays. Common ingredients in these treatments include fipronil, imidacloprid, permethrin and pyriproxyfen. Again, these chemicals can also be toxic to household pets if ingested.

As with fleas, there are natural treatments that you can use to prevent ticks from getting on your dog. Some of these preventatives include:

Removing Ticks from Your Dog

Remove a tick by grasping it firmly with a pair of tweezers as close to the head as possible and pulling up. Be sure to remove the head when removing the tick.

After removing a tick, be sure to wash the bite with hot soapy water and cleanse with rubbing alcohol. Monitor the area for signs of a rash in the coming weeks.

If the head of a tick remains after removal, do not try to remove it. Coat the area with antibiotic cream and allow the body to push the head out naturally. Ticks should be disposed of by flushing them down the toilet or by drowning them in a container of rubbing alcohol.

WATCH THIS: How To Remove A Tick From A Dog