The average dog should breathe 20 to 34 breaths per minute. These breaths should be full and your dog should show no pain or difficulty when filling their lungs with air.

If your dog's breathing seems stuttered, incomplete, or painful, this is considered labored breathing. You may also notice the dog snorting, sounding raspy, or sounding like they are choking.

There are a variety of medications that can cause labored breathing in dogs, most commonly pain medications and sedatives. These medications slow the animal's heart rate and breathing.

When used properly, most dogs on these medications do not experience labored breathing as a side effect, but it can happen, and when it does, it can be for a few reasons:

A lack of coordination as a side effect of dog medication can be caused by something “simple” like a feeling of dizziness or something more severe like a sensory or a neurological issue. While it may be the result of something simple, a loss of coordination should always be treated as an emergency.

A dog experiencing a lack of coordination may sway while standing still, tilt their head to the side, take larger or smaller steps than normal, exhibit tremors, or look just like they are walking oddly.

A lack of coordination in dogs caused by dizziness or disorientation is often the result of medications like heavy duty pain killers. Other medications that can cause incoordination are those known for causing sensory or neurological symptoms like seizures, such as Fluoroquinolone antibiotics.

A loss of coordination can happen for various reasons including:

A rapid heartbeat – sometimes called tachycardia – should always be considered a veterinary emergency. In fact, anything that alters the normal rhythm of the dog's heart should be evaluated by a veterinarian right away.

There are several categories of tachycardia, but most commonly: atrial, ventricular, and sinus tachycardia. The type of tachycardia depends on where in the dog's heart the abnormality originates.

The average heart rate for dogs depends on their size, age, and health:

Dogs experiencing tachycardia may be asymptomatic or they may show the following symptoms:

Tachycardia can result from a variety of pet medications, but the most common cause of this symptom is thyroid medication like levothyroxine.

Among the processes that may cause tachycardia in dogs due to medication use are:

Fainting – also referred to as syncope – occurs when the normal blood flow to the brain is slowed because of a drop in blood pressure, which then causes a loss of consciousness.

Some pet owners are unaware that their dogs can faint, and they misdiagnose their pet as having had a seizure. But fainting can be distinguished due to lack of seizing activity (e.g. picture a human fainting and a human seizing, and you can see the difference a little more clearly).

If your dog faints, seek emergency veterinary treatment right away.

Fainting can happen as a result of heart problems or neurological problems but is also noted as a side effect of some medications such as pimobendane and benazepril. This happens when a medication causes an abnormal heart rhythm which can lead to syncope.

When fainting, your dog will fall to the floor. When this happens, put your hand on the dog's chest to check for vital signs and feel whether the heartbeat is fast or slow. This rate can help your vet to identify the cause of fainting.

Among the processes that may cause syncope in dogs due to medication use are:

Generalized tonic-clonic seizures in dogs are the most common type of canine generalized seizure, but are usually associated with epileptic disorders. In some instances, they can be caused by medications including:

Among the processes that may cause convulsions in dogs due to medication use are:

Pale gums or mucous membranes are caused by a lack of hemoglobin or a lack of blood. This happens when there is not enough oxygenated blood circulating through the body. Pale gums in dogs is a serious concern and requires immediate veterinary intervention.

Pale gums/mucous membranes can be the result of side effects of a range of medications that interfere with red blood cell production or that can cause bleeding including:

Symptoms caused by medications that may lead to anemia or red blood cell damage are:

7. Yellowing of the Skin, Eyes, or Gums

Yellowing of the skin, eyes, or gums is referred to as jaundice. Jaundice in dogs is always a veterinary emergency.

Dogs with jaundice may also exhibit the following symptoms:

Among the processes that may cause jaundice due to medication use are:

Black, tarry, or bloody stools are all a sign of blood loss. Poop color is a good reference point for a dog's health, and any sign of blood in a dog's stool requires immediate veterinary attention and cannot be delayed.

A black or tarry stool is caused by darker blood which is referred to as melena where a bright red blood in the stool is called hematochezia.

Melena has a jelly-like consistency and is darker in color because the blood has passed through the dog's stomach or digestive tract. Darker blood indicates that the problem originates from the upper digestive tract.

Hematochezia is bright red blood and indicated that the bleeding originates in the dog's colon or lower section of the digestive tract.

Dogs with blood in their stool may also exhibit other symptoms including:

Blood in the stool can result from a wide range of medications including anything that irritates the digestive tract.

Among the processes that may cause blood in the stool due to medication use are:

Weight loss is a symptom that can occur very quickly or over a period of weeks, but any significant weight loss requires a veterinary check. Weight loss in dogs can be a sign of many problems that vary in severity but only a veterinarian can determine the cause.

Weight loss can also be the result of dog medication side effects, and most commonly from antibiotics and chemotherapy medications.

Among the processes that may cause weight loss due to medication use are:

As your dog’s owner, you know what is considered “normal” behavior for them and any changes in that behavior can indicate a serious problem. Take note of how your dog’s behavior has changed so that you can better explain the change to your vet.

Behavioral changes can be anything out of the norm but often include increased aggression, withdrawing or isolation, and “spacing out”.

Behavioral changes can result from a variety of pet medications, but most particularly psychiatric medications (for issues like anxiety or depression), antiepileptic drugs like Levetiracetam or medications that influence neurological function.

Among the processes that may cause behavioral changes due to medication use are:

At the Tail's End

With most medications, there's always different degrees of risk of adverse effects in dogs. It's important to be aware of them beforehand, and be prepared to recognize the signs and knowing what action to take.

Although the above mentioned dog medication side effects always warrant a vet visit, they are not all-inclusive. If you ever have concerns about adverse effects that your dog is experiencing after taking a medication, head to your vet right away. 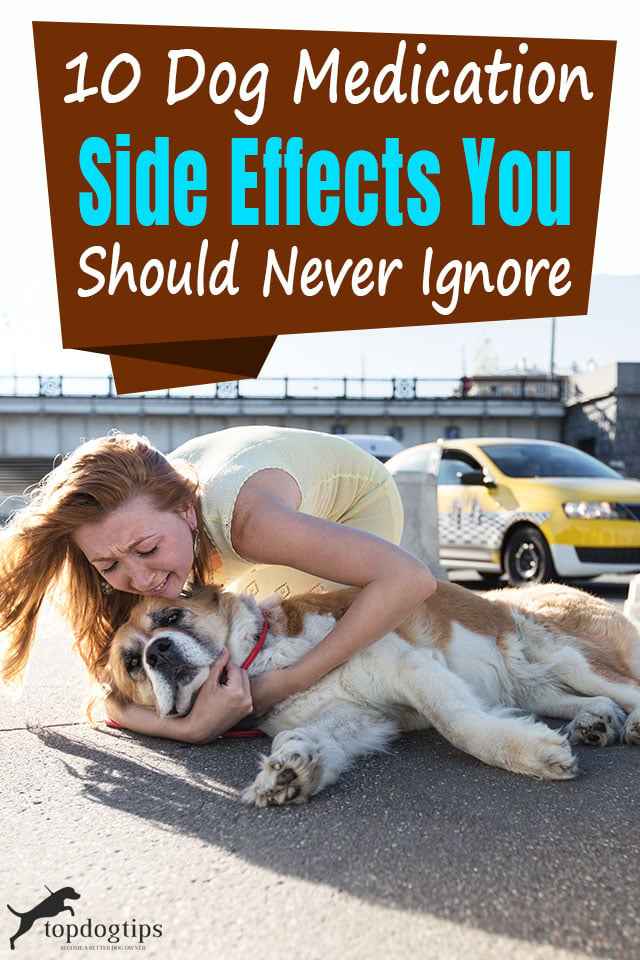