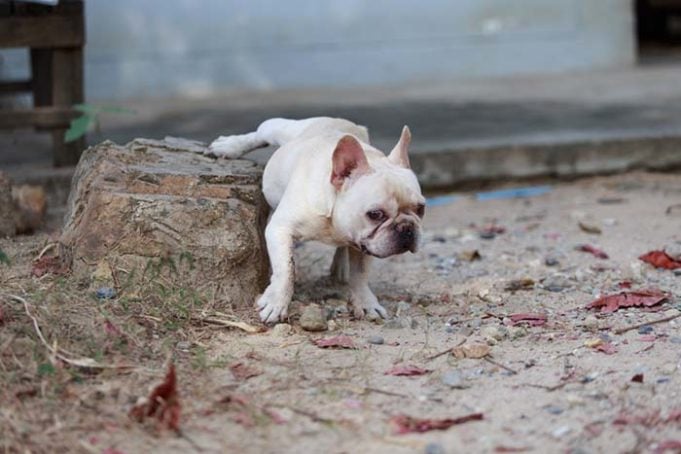 There's new research showing that dogs, our most trusted companion, apparently tend to lie to other dogs and are very capable of deception.

A new study showed that some canines, especially the smaller breed dogs, deliberately send the wrong signals to mask their real size with their pee markings.

The study, published in the Journal of Zoology, revealed that small male dogs try to raise their legs higher when they pee. The angle creates a marking that tells other dogs there is a large dog in the area.

“It would be surprising if numerous species weren’t exploiting the height of scent marks.”

Cheating on Their Pee Marks

Experts from Cornell University conducted the experiment by walking and filming 45 shelter dogs of different sizes. This took place within a period of two years. They analyzed hundreds of video recordings to determine the angle of the pee markings versus the size of the dogs.

The experiment showed that lightweight and small dogs tend to lift their legs higher when they pee compared to large and bulky dogs. These animals averagely raise their legs to pee at an 85° to 147° angle but the smaller dogs apparently exaggerate their leg lifting. With this behavior, the experts concluded that smaller male dogs tend to “cheat” on the pee marking.

Cornell's head researcher Betty McGuire said that the exaggerated pee marks might be the male dog's way of telling other dogs to stay away from him. It's the small dog's defense mechanism against potential encounters, where they know that their size could not possibly match the other dog.

Ecologist Lynda Sharpe from the Australian National University in Canberra took interest in this research's results because the behavior is not unique to male dogs. Sharpe has done a similar study on dwarf mongooses that do a handstand position when they pee to also fool other animals.

The expert said that the dogs' behavior did not surprise her. She won't also likely be surprised if there are other species who exaggerate their size with their scent markings in other to assert their abilities, as per Science Magazine.

However, the study did not account for a typical dog behavior called over-marking. This happens when dogs pee on top of another scent mark as a form of status signaling and dominance.

It's instinct for dogs to “cover up” the other urine scent to show their social power. It's the animal's way of communicating to the other dog that he's the alpha because he can conceal the other pee mark with his own scent. It's also his way of telling other dogs that might follow and sniff that he's higher on their social status quo.

5 More Facts About “Over-marking” in Dogs 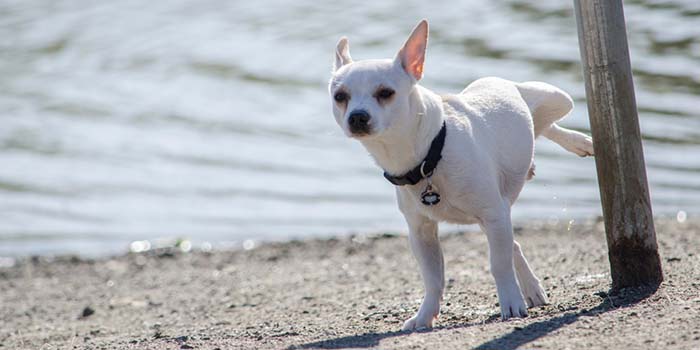 Some breeds of dogs have different muscle and joint lifting power. Small dogs, for instance, might be more comfortable to raise their paws higher because of how they are physically built.

2. It's to cover up the scent of a female dog

Some male dogs overmark to cover up the scent of the urine of a female dog. They don't want to other dogs to be alerted of the presence of a potential mate.

The behavior is not just limited to male dogs. Even female dogs also convey their dominance and social standing with their pee marks, according to another study done in 2011. But instead of peeing on top of another mark, female dogs pee next or nearby the other scent marker. Experts learned that female dogs are less active about countermarking per se but they are more curious about investigating a scent mark.

4. Dogs with low social status won't pee on top of another mark

Meeker dogs that are on the lower status of the pecking order will not attempt to overmark and pee on another dog's scent markers. They don't want the bigger and tougher dog to see them as a threat, in case there’s a face-to-face interaction.

It's usually the dog that has not been fixed through spaying or neutering that will overmark. The ones that have been snipped will likely not want to “advertise” their status, especially if they can sense that there's a neighborhood bully.

Training Your Dog Not to Overmark 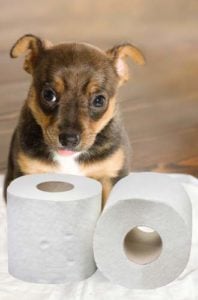 While overmarking might be instinctive to canines, pet dogs may still be trained to curb the habit especially if the show of dominance is happening inside a house with more than one dog. For one thing, spaying or neutering will help lessen the behavior but you can actually modify this through proper training and care.

Make sure that soiled areas in your house are thoroughly cleaned to eliminate the odor. Keep these areas inaccessible and try to contain your dog in significant places where they eat and play so that if they do make a mark then it’s only contained in this area. Don't put objects on the floor that will be easy to reach for your dogs, such as a bag of grocery items, luggage, shoes, or your guests' things.

Always take your dog for a walk in the morning and at night so that you can help him develop a peeing schedule. Walking is not just for their exercise but it’s also the most convenient time for them to relieve themselves.

Keep an eye out for your dog indoors especially when they are acting like they are about to pee. Interrupt them with a loud noise when they do and then take them outside to urinate. Don't forget to praise or reward them with a treat to reinforce this proper behavior.

Your supervision and guidance are important in training your dog to pee. But if you're not always around to watch your dog, make sure that they are in a crate so that they won't wander around your house and pee everywhere.

Get help from a veterinarian or a trainer if the peeing behavior doesn’t change despite your supervision. The dog might have other medical or behavioral issues that need to be addressed.

READ NEXT: 15 Hacks on How to Housebreak a Puppy Using Puppy Pee Pads