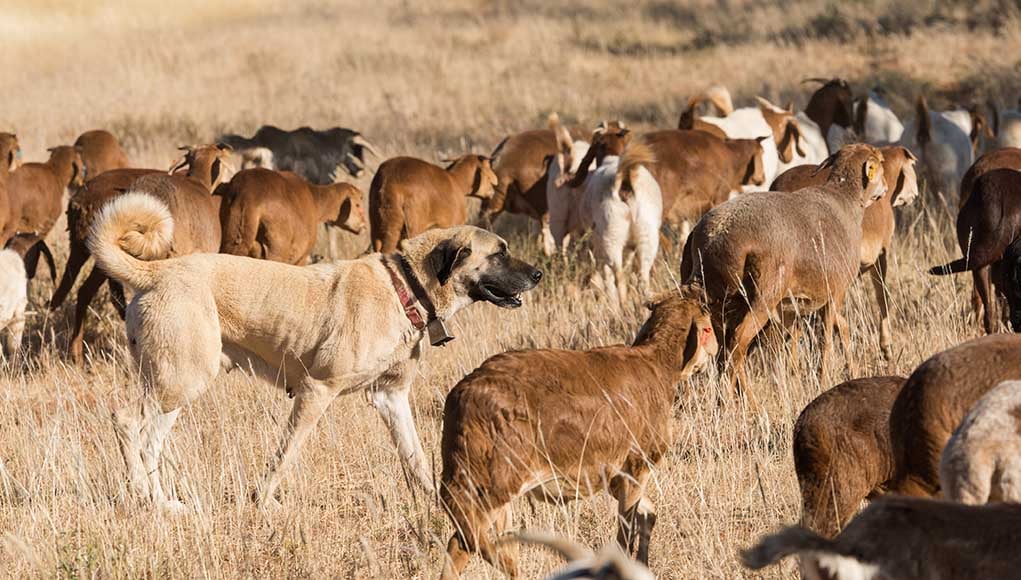 Livestock guardian dogs have been used worldwide to protect animals that are vulnerable to predators. They do this by marking their territory to keep coyotes and wolves away.

And if that doesn’t work, the dog will bark to scare the predators from coming too close.

If those tactics don’t work, the dog will confront the predator and physically scare it away.

Similarities of Livestock Guardian Dogs: What To Expect

There are many different livestock breeds used around the world.

The ten listed here are some of the most popular. 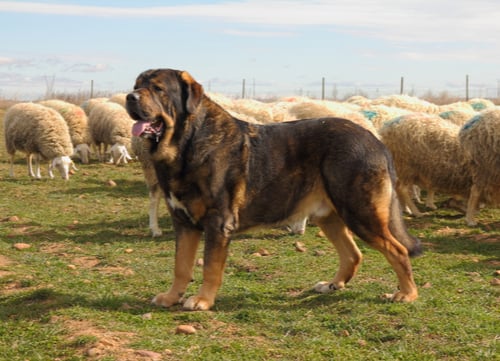 Spanish Mastiffs are massive dogs that can weigh up to 200 pounds.

Their coat is very thick to protect them from the elements and varies in color.

Despite their intimidating size, they’re known for their kind nature and intelligence.

However, that kind of face doesn’t make them any less scary when they’re staring down prey.

The origins of the Spanish Mastiff date back centuries, but they were used more prominently beginning in the 10th century when they would guard sheep and protect their shepherds.

Their thick coats helped protect them from the weather in the mountains of Spain as they worked.

They have a low, deep bark to alert their owners to predators while scaring them away.

Due to their size, they need early obedience training.

Without it, they could easily hurt a small child or another animal just by playing around. 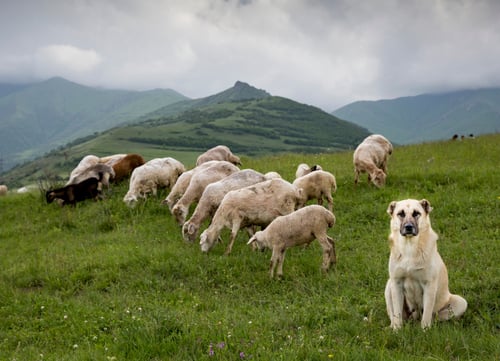 The Anatolian Shepherd is a special dog breed originating from Turkey.

The Turkish people valued them so much that they kept them secret for as long as possible.

It wasn’t until the 1970s that dogs first became popular in America.

That was due to the Endangered Species Act of 1973 when it first started being used to protect endangered animals.

They are even being used to protect flocks of goats and sheep from cheetahs in Namibia.

A male Anatolian Shepherd can reach up to 150 pounds. Their appearance is intimidating in nature, with a dense double coat, muscular shoulders, a broad head, and a long tail that curls over their back when excited.

They look a bit like a very muscular, yellow Labrador Retriever.

When the dog moves, it naturally looks like it is stalking a predator, which is an essential characteristic in a livestock breed.

The Anatolian Shepherd is sometimes confused with the Kangal dog breed. Although they’re similar, many breeders consider them to be separate breeds. 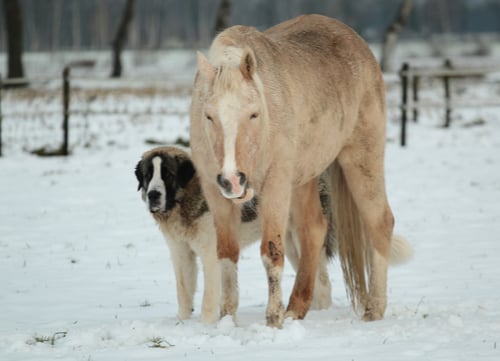 Pyrenean Mastiffs are huge, gentle giants with their families but intimidating to any prey trying to kill livestock.

However, if they were any less than the 240 pounds a male can reach, they might not be as intimidating. They have a lower prey drive than other livestock guardian breeds and don’t bark much.

They’re also very gentle with other dogs and children.

Pyrenean Mastiffs are as dependent as other livestock guardian breeds, excelling at making spur-of-the-moment decisions without human intervention.

In appearance, they tend to have a white, thick, shaggy coat that may be spotted with black or other colors. Their muzzle is short in comparison to their large body size.

Their expression is serious, and they have dark patches over each eye, making it look like they’re wearing a mask. 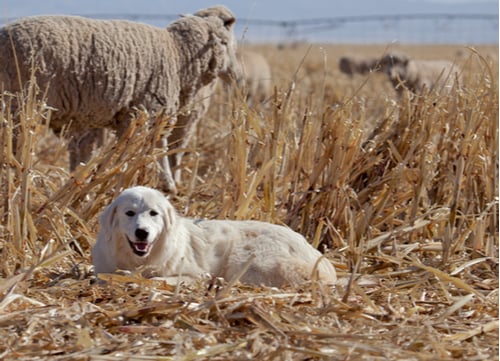 The great Pyrenees are smaller than the Pyrenean Mastiff but hail from the same mountain range between France and Spain, where they were used to protect livestock on the snowy mountaintops.

The Great Pyrenees tend to weigh an average of 100 pounds. They have a white, fluffy coat that helps them blend in with snow.

Without predators, the Great Pyrenees make calm, gentle pets for families and are great with children.

But when faced with a predatorial threat, they have great agility that helps them spring into action and move with great speed and grace to scare it away. 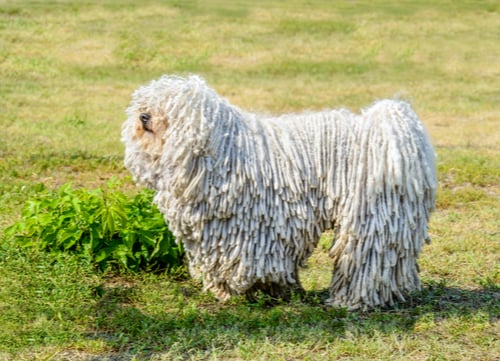 Komondors are unmistakable in appearance due to their long, corded white hair.

Hailing from Hungary via Tibet, it looks like they have long, white dreadlocks. These dogs are so shaggy that it is surprising how they can even see through the cords.

A male Komondor averages about 110 pounds, more or less.

Komondors are highly independent and protective, making them difficult to train.

But protecting livestock comes easily for them due to their nature. Still, an experienced owner is best for these strong-willed dogs.

They need training early to learn that the owner is the boss. 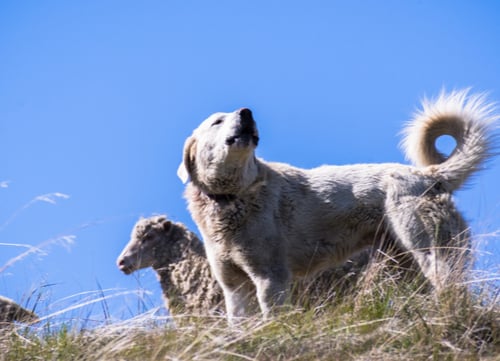 The Akbash is another dog resembling a large, yellow Labrador Retriever. However, the Akbash are fluffier and white, which helps them blend in with the sheep they have been known to protect.

The muzzle is broad at the top of the head and then narrows to a point as it reaches the mouth.

The Akbash hail from Turkey, and the name comes from the word “akbas,” which translates to “white head.” Their weight varies, but a male can average 120 pounds.

Akbashes are loyal and affectionate family dogs and aren’t very aggressive. Still, they bark at approaching strangers and alert livestock owners to predators. 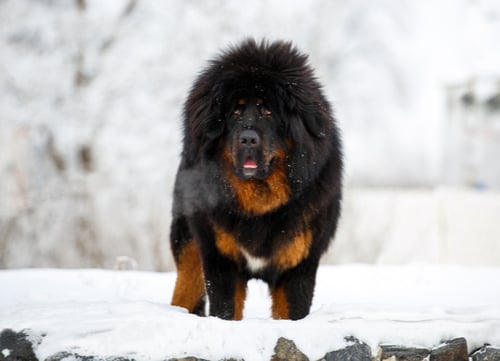 Tibetan Mastiffs hail from their namesake of Tibet, where they were initially used to guard livestock. As for size, the range varies significantly.

As pets, they’re mellow dogs who are gentle with kids. But they’re territorial around strangers, making them great guardians.

They can be destructive when bored and tend to chew on wood with their strong jaws. 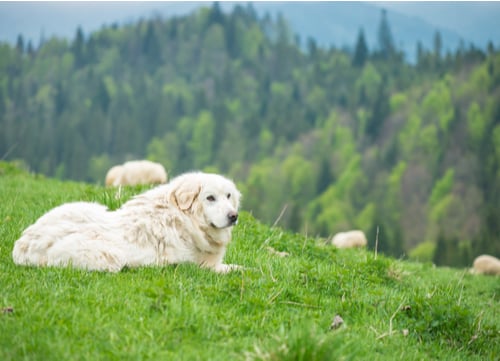 They average about 115 pounds, more or less, and have sweet-looking faces with alert eyes.

Tatras are very independent, making them somewhat difficult to train. But training is made easier with early socialization. They can be very gentle with children. 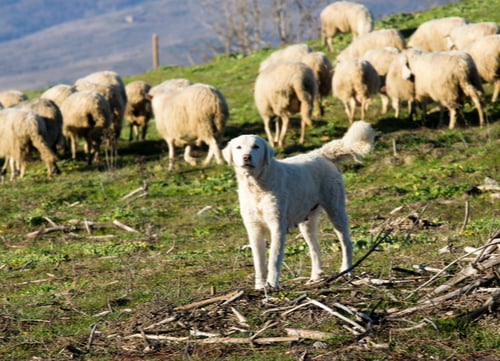 The Maremma Sheepdog is indigenous to Italy, sometimes called the Maremmano-Abruzzese.

They’re smaller than most livestock guardians in weight, averaging 90 pounds, but they have long legs and can reach up to an average of 28 inches at the shoulder.

Their coat is white and thick, helping them blend in with the sheep they are accustomed to protecting.

This breed loves to show affection by leaning against its humans, who are great with children.

Unlike some livestock guardians best suited for larger animals, the Maremma Sheepdog has no problem with smaller livestock like ducks and chickens.

To aid the Maremma Sheepdog in guarding your flocks, consider installing an automatic chicken coop door for protection against nighttime predators. 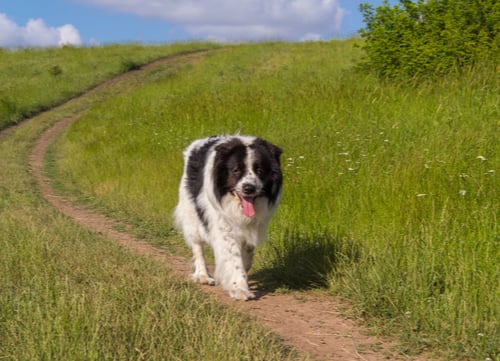 The Karakachan is named after the Karakachans, who were nomadic Greek Shepherds. They’re popular in Bulgaria and neighboring regions, and they’re also known as Bulgarian Sheepdogs.

Karakachan is known for having very acute senses. They’re also vigilant guardians who tend to form strong bonds with the livestock they protect.

This breed has a thick, fluffy, white coat with large spots of varying colors. They have small eyes on a broad muzzle and V-shaped ears.

The Karakachan averages 110 pounds, but their sizes vary greatly, and males are much larger than females.

If you’re looking for a livestock guardian, it will take a lot of training to reach these independent dogs, but their loyal temperament makes the reward worth all the effort.

How much do livestock guardian dogs cost?

If you want more of the unique livestock guardian dogs, expect to pay a couple of thousand dollars and at least $1000 for the following couple of years.

Regarding the more common livestock guardian dog breeds, expect them to cost similar to new guard dogs: $1000 when you first get them and probably $500 annually afterward.

In the first couple of years, your LGD isn't skilled at protecting your livestock, so you need to spend more to keep the flock protected until they increase their skills.

All that muscle and size, will whither away unless they scarf down enough calories. ESPECIALLY DURING WINTER.

Always increase dog food when it gets cold.

The dog will be sleeping outside and working rain or shine in very cold temperatures.

Do livestock guardian dogs run away?

Most, if not all, livestock guardian dogs will roam.

Some roam more than others. Here are the breeds that like to roam off on their own:

Fencing is mandatory to have set up if you're even considering an LGD.

Do livestock guardian dogs sleep outside?

Yes. When training Livestock Guardian Dogs (LGDs) you want them to bond with the flock they are guarding.

This includes sleeping outside with the flock. 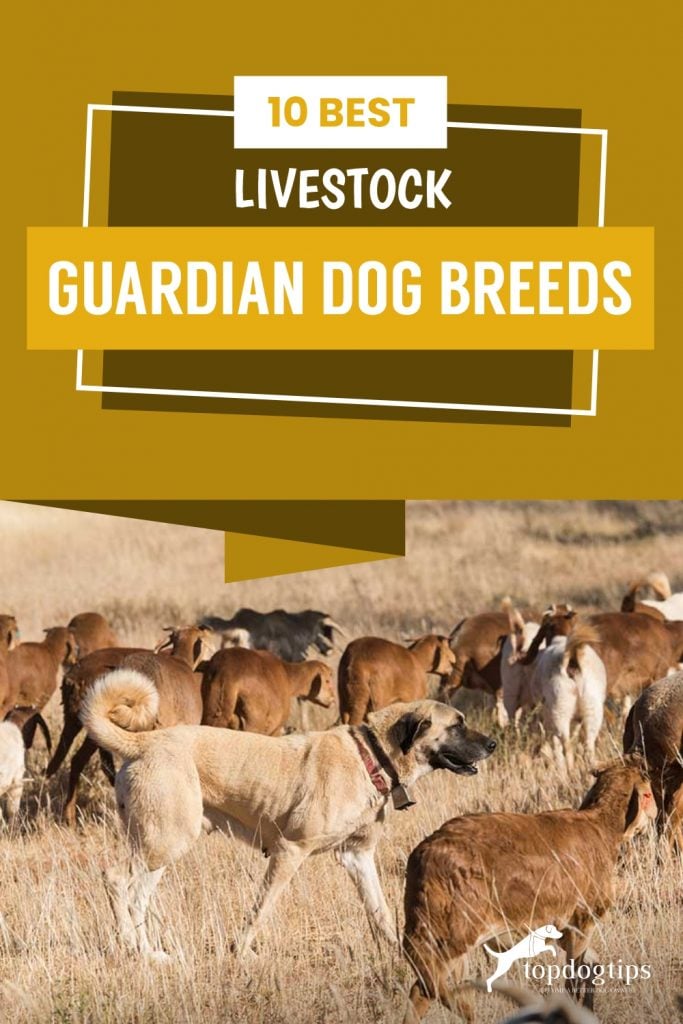