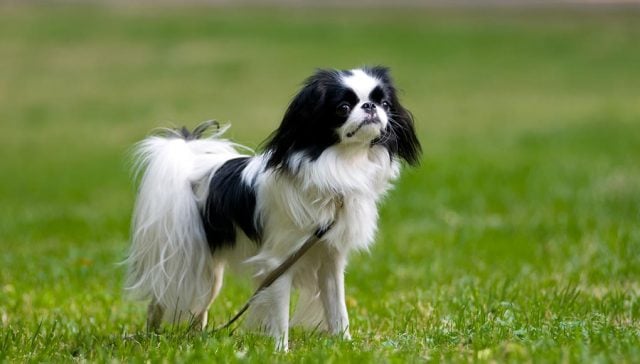 Asia is a massive continent with a rich, ancient history. It should be no surprise that it is home to a wide variety of dog breeds, and that many of them come from China specifically. Perhaps that’s because China is believed to be where dogs were domesticated thousands of years ago. Some of the most beloved dog breeds have roots that trace back to China, most likely because they were such great pets there that the Chinese gifted them or traveled with them to other parts of the world. Read on for a list of some of the most popular Chinese dog breeds—some you may have heard of, and others that might be new. Each of them can make a great addition to the right family in their own unique way.

The Chinese Crested dog is a very distinguishable breed with its small, hairless body and tufts of long hair around their face, paws and tail. They can grow to an average height of 12 inches and weigh an average of 10 pounds. It’s believed that these dogs were brought onto Chinese trading ships to hunt rats and other vermin. Nonetheless, are fun, loving, devoted pets. And because they lack hair, shedding and isn’t much of an issue. Plus, they have an amazingly long lifespan of between 13-18 years. 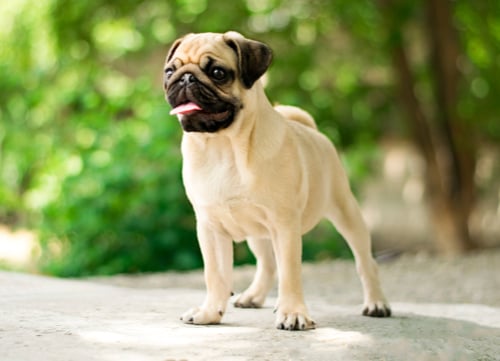 Another smaller dog is the Pug, coming in at 15 pounds and 12 inches high. Pugs have a cute, dark mask on their wrinkly, pushed-in face. Their eyes are wideset, and they have short fur that can be a light-brown color, apricot or black. As pets, Pugs are playful and easy-going, getting along with other pets and children. Since they’re quite small, they’re well-suited for apartment life. But since they enjoy their food, care must be taken to ensure they don’t overeat and become overweight.

This medium-sized dog, averaging 35 pounds and 18 inches in height, is a muscular but lean dog getting along with other pets and children and guarding. History shows that, in the Guizhou Province, people believed that owning one of these dogs would make the owner wealthy. Their coat is white, wiry and somewhat short, but shaggy. Their ears are pointed on top of a large, wide face. Xiasi Quans are not very sensitive to outside stimuli, making them good pets for families with young kids and lots of distractions. However, they may see small animals as prey, so other small pets should be kept away. 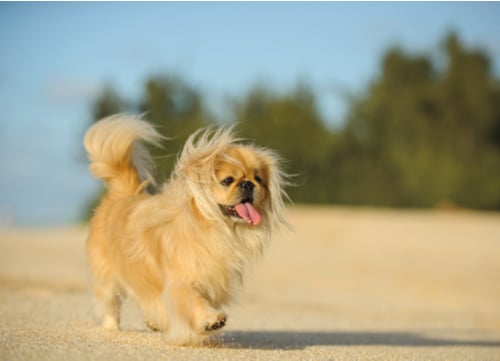 Pekingese are toy dogs, but they’re more stocky than other toys, meaning they’re less delicate and sensitive. That doesn’t mean they tolerate rough play, however, and they don’t do well in households with small kids or dogs that play too rough. In appearance, the Pekingese has a long coat that reaches all the way to the floor, making it look like the dog is floating when it moves. Pekingese are smart dogs, and they make good watchdogs. But making a good watchdog means they may bark more than other dogs, since they can’t do much else to defend their family due to their small size — typically no more than 8 inches high and 14 pounds in weight.

Like a small version of a German Shepherd, Kunming Wolfdogs average a height of 26 inches and a weight of 72 pounds. In China, they’re often trained to be search-and-rescue dogs and military dogs. They’re very smart and are also popular pets in China. In appearance, the Kunming Wolfdog has pointy ears, a long tail and a double coat that has the same coloring as a German Shepherd: black, brown and cream. If you’re going to own one of these smart, loyal dogs, you’ll have to maintain your status as a pack leader, since they can be willful and show their displeasure by biting and growling. 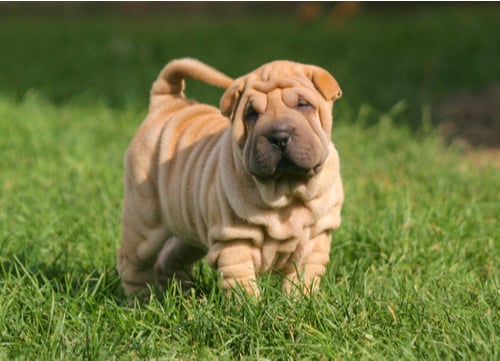 Shar Peis have a unique, wrinkly look with their many folds of skin and bristly brown coat. As for size, they’re medium, averaging 19 inches in height and weighing an average of 53 pounds. Their wide face, small eyes and tiny pointed ears are unmistakable. As cute as they can look, especially as puppies, they can be quite intimidating, as they’re very protective and loyal. As such, they need an owner who presents themselves as the pack leader and can show what type of behavior is acceptable and what isn’t.

Although they’re called the “Japanese Chin,” these dogs are actually believed to be from China. History shows that Chinese emperors first owned the dog before taking them to Japan where they became increasingly popular. With a cute little face similar to that of a Pug, the Japanese Chin has a small body with lots of long, flowing hair. And surprisingly, their hair is quite resistant to matting, making them less high-maintenance than they look. If you have a Japanese Chin, be prepared to have them sitting on your lap most of the time. They’re perfectly happy in the companionship of their humans and getting the occasional walk for exercise. Because they’re quite small, reaching 10 inches high and weighing about 10 pounds, they shouldn’t be in a home where there are young kids who might play too rough with them. 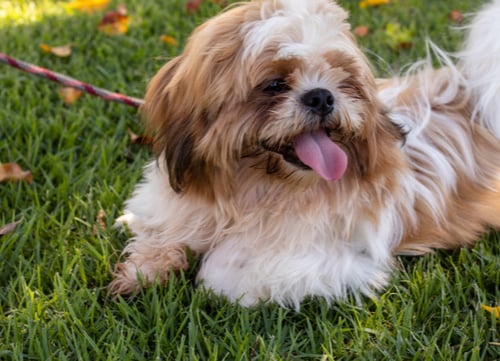 A dog similar in size to the Japanese Chin but a little more sturdy and hearty is the popular Shih Tzu. They’re great family pets known for their affectionate nature and patience with children. Their hair isn’t as resistant to matting as the Japanese Chin but still is easily maintainable with regular brushing. Many owners have fun grooming their Shih Tzus’ hair by putting their colorful coat in different ponytails. As for color, they tend to be multicolored with white as the most popular base color.

This ancient Chinese breed looks similar to a greyhound but has tufts of long hair on its curly tail and short-hanging ears. It is a tall dog of medium weight, but it’s measurements vary. In the hound category, they’re specifically sighthounds, relying more on their keen sense of sight as opposed to their sense of smell or hearing. With a history reaching as far back as 685 AD, the Xian Hound was bred to locate, track and capture prey on open fields. It was named after Zhang Xian, the ancient Chinese God — a skilled archer who often took the form of this dog. Their long legs make them amazing runners. Unfortunately, this breed is extremely rare, considering the Chinese government banned citizens from hunting and these dogs were no longer needed for the sport. 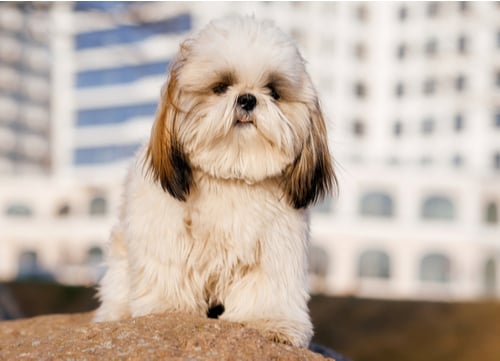 The Chinese Imperial Dog is similar in appearance to the Shih Tzu, although it is slightly smaller. In fact, some people even say that it is just a toy-sized Shih Tzu. On average, it is about 7 inches tall and weighs an average of 7 pounds. Its eyes are wide-set on its broad face, and its nostrils are wide open on their short, square muzzle. They tend to have an underbite as well, similar to the Shih Tzu. Their double coat is long and flowy and needs regular grooming. Although their small size may make grooming a little more tedious, it is worth it considering their personality and cuteness. They’re a happy lap dog with an easy-going nature, well-suited for apartment life. Like with any small breed, however, households with small kids aren’t an ideal fit.

The Formosan Mountain Dog is also known as the Taiwan dog. Just like its name suggests, it has origins in Taiwan. It is a small to medium-sized breed with an average height of 15 inches and a weight of 35 pounds. In appearance, they can look similar to a short-haired German Shephard, especially because of their pointy, alert looking ears. Their face, however, is more wild-looking, almost like a coyote. The coat of the Formosan Mountain Dog is short and smooth and can vary in color, whether it be brindle, black, fawn, white or a combination. Although they were once considered wild dogs, many people use this dog for a variety of domestic purposes, including as rescue dogs and hunting dogs. They’re smart and very protective of their families, who they prefer to be around as often as possible instead of being left alone.

A Chow Chow is instantly recognizable by its lion-like, fluffy coat and its teddy-bear ears. They’re medium-sized dogs reaching up to 20 inches high and weighing an average of 55 pounds. Chow Chows are one of the oldest Chinese breeds, dating back to 200 BC. They’re smart dogs that are very easy to train. They’re also very loyal to their families and are perfectly fine living in an apartment since they don’t have specific exercise needs. Their unique name is new in comparison to their ancient history. According to folklore, British traders used the term “chow chow” to describe miscellaneous items in a ship’s cargo. When trading with China, they put these dogs into that miscellaneous category when bringing them back to England.

Chinese dog breeds are likely the oldest on the planet. Yet they’ve become so popular around the globe that it’s easy to forget their ancient history. 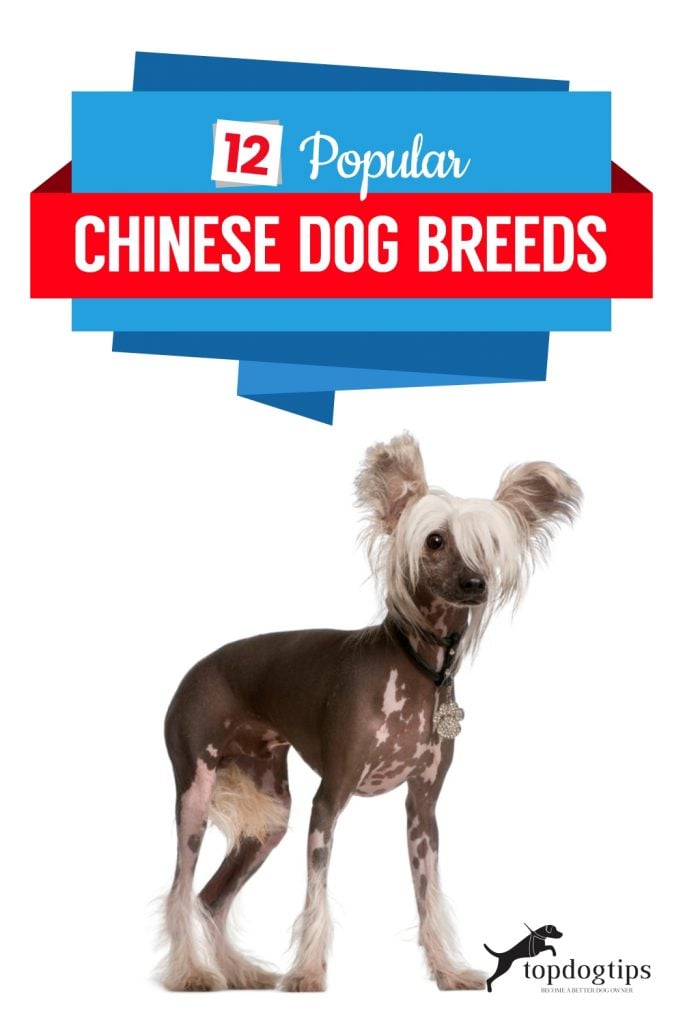