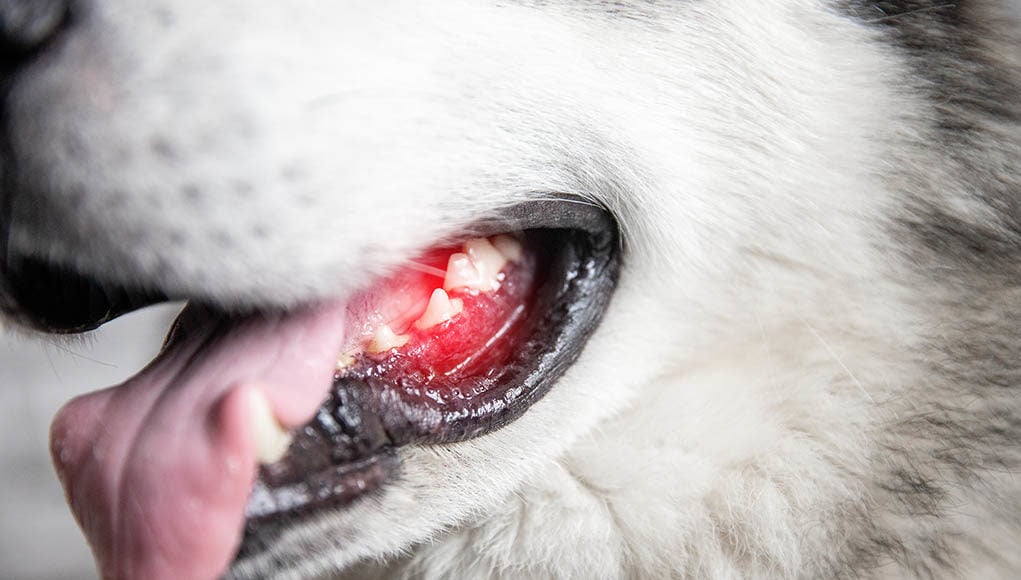 Is your dog’s gums bleeding recently? What could be the cause of that? What are the possible treatments?

In this blog, we'll discuss everything you'll need to know about bleeding gums in dogs.

The gums might sometimes be overlooked from time to time, but they're just as important to a dog's mouth.

We must ensure that they are clean and healthy just like their teeth.

Generally, bleeding gums in dogs is an indicator of poor dental hygiene.

However, these can also be caused by dental problems that we'll discuss below.

But before we get into that, let's first discuss what should be the correct color of your dog's gums. 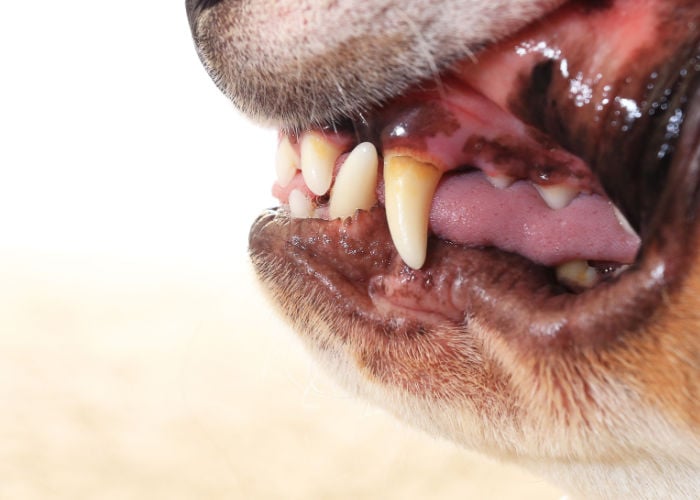 What Color Should My Dog’s Gums Be?

The easiest way to know what healthy gum looks like is to go to the supermarket or grocery store.

The next thing you want to do is look for shrimp! No, I am not kidding.

If you're wondering, what color of a dog's gum should you be worried about?

Below, is a short list of gum colors that you should look out for. Also, keep in mind that these occurrences are not complete.

Gums Diseases that Cause Bleeding Gums in Dogs

Dog gums bleeding can indicate numerous things. A few of those can be serious problems.

For instance, we've listed below three of the most common dental problems that cause dog gums to bleed.

Gingivitis is the medical term for the inflammation of the gums. It is the first stage and only reversible stage of Periodontal Disease (which we'll discuss further below).

It can be caused by a bacterial infection from plaque bacteria on the teeth.

Also, this disease usually happens to dogs that have poor dental hygiene.

When the bacteria enters into the small spaces between the gums and teeth, this can cause an inflammatory reaction. Moreover, if left untreated, it can result in tooth loss.

So what is Periodontal disease in dogs? It is an infection and inflammation of the periodontium (tissues surrounding the teeth).

The main cause of this is bacterial overgrowth in the mouth. Remember Gingivitis? Well, this one's worse.

Unfortunately, periodontal disease can affect one tooth or the whole mouth. At first, it can just be inflamed gums.

Next, it'll attack the bone around the tooth roots. And if not treated, it can lead to severe pain, loss of teeth, and other dental problems. 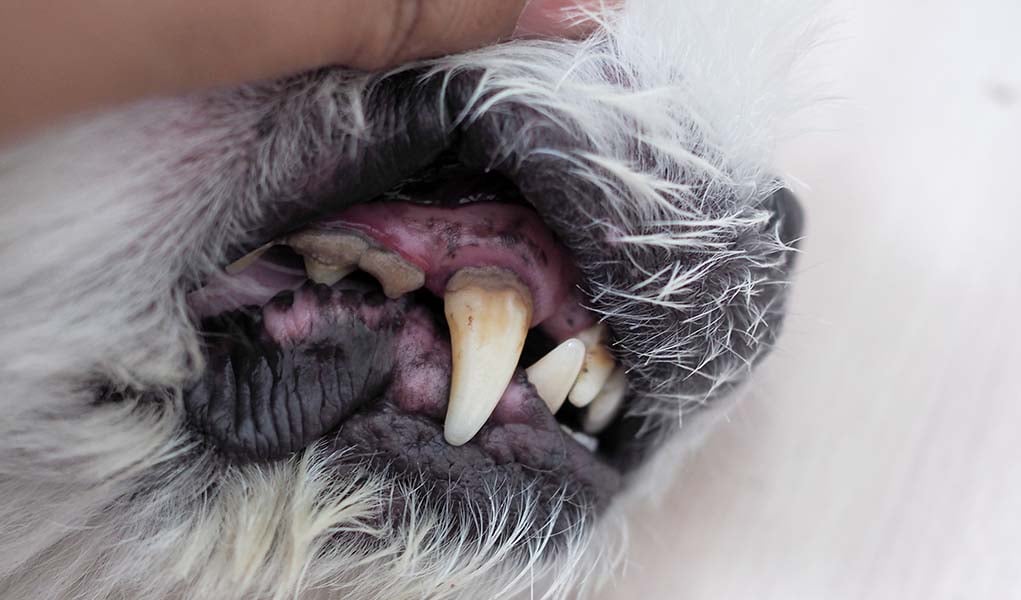 Other Causes of Bleeding Gums in Dogs

Furthermore, let's move forward to other possible reasons for gums bleeding in dogs.

Firstly, one of the most common reasons for bleeding gums in puppies is teething.

If your pup is still at age eight months or below, there are times that you'll see their gums bleeding.

Fortunately, teething only lasts a couple of months and the bleeding will stop when the teething course is over.

In this period, it would help if you give them the right puppy teething toys to help relieve the problem.

Secondly, oral tumors can also cause gums bleeding. You can check your dog for oral tumors.

However, sometimes the tumor is not easily visible. That's when your vet comes into play.

Only your vet can rightfully diagnose a pet with oral tumors. Once diagnosed, it's now time to discuss with your vet the proper treatment like whether or not a biopsy or surgery is needed.

Moreover, bleeding gums can just be caused by simple cuts and scrapes.

If you don't see too much blood and it only occurs not that often, check their gums for any signs of an injury.

These cuts can be caused by a hard chew toy or even just by them eating.

No need to sweat on gum bleeding caused by cuts and scrap since it'll be okay in a couple of days. However, you should still look out for possible infections.

Keep an eye out on their gums until it fully heals.

Next on our list are foreign objects. When a foreign object gets caught specifically between the dog's teeth, it can cause bleeding.

For instance, there are times when a small piece of bone gets stuck in their teeth.

Even pieces of plastic or aluminum from chewing up containers or other objects.

These objects can be pulled out easily most of the time, but watch out for rare occasions where the anesthetic is needed.

If your dog has never had a professional dental cleaning, rotting teeth can be a problem.

Senior dogs are more prone to rotting teeth but keep in mind that it can affect any dog of any age.

Rotten teeth will eventually crack, splinter, and break. It can also be prone to infections which can spread to the gums.

From that, it'll cause the gums to bleed, especially after toothbrushing, eating, or chewing.

Diagnosis of Bleeding Gums in Dogs

Your vet will now then perform dental exams under general anesthesia.

A few steps for diagnosing bleedings gums are: 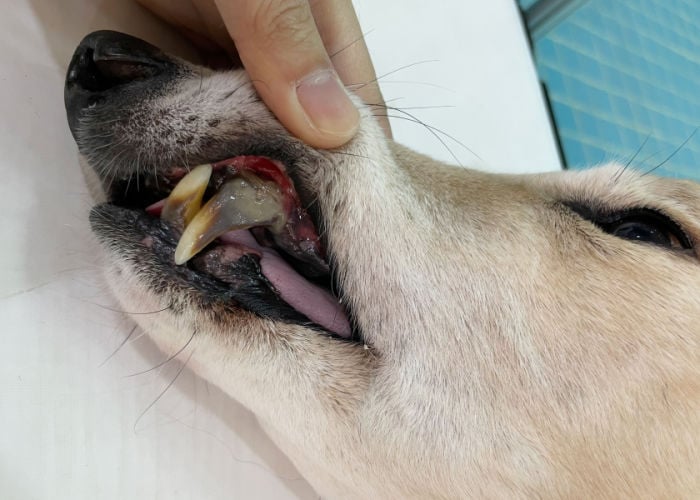 Treatment of Bleeding Gums in Dogs

The treatment will vary on the cause of bleeding in their gums.

But if you suspect that your dog has bleeding gums, it is best advised to take him to the vet.

For instance, we have different ways of treating gingivitis and teething. Gingivitis can be treated with daily brushing and good oral care.

Unfortunately, the second stage of periodontal disease is irreversible. But you can still prevent it from getting worse.

The proper treatment will depend on the results of the exam and x-rays.

It can just be a good cleaning of plaque and tartar on the tooth's surface, tooth extraction, or periodontal surgery.

Unfortunately, if immune diseases or cancer are found, a gum biopsy is needed.

We can't just guess the root of the problem. You'll need to call a professional since our best buds deserve the best care possible.

What happens if periodontal disease goes untreated in dogs?

The prognosis of periodontal disease will depend on the stage. For instance, stage 1 is gingivitis.

The prognosis is good as long as they get the right dental care.

Next is stage 2, the prognosis is fair as long as they receive the proper dental treatment.

Stage 3 periodontal disease prognosis is fair if the dog is given advanced dental procedures.

Unfortunately, the stage 4 periodontal disease prognosis is poor. Any tooth that is in stage 4 must be extracted.

Generally, yes. If the dental problem can not be fixed, tooth extraction will be done.

Extraction will not only fix the problem but can also improve your dog's dental and overall health.

They will feel relieved from any pain that is caused by the infection.

Can dogs recover from gingivitis?

Gingivitis can be cured by daily brushing and proper dental care. However, Gingivitis is also the first stage of periodontal disease.

That's why it's in your best interest to stop this as early as possible. 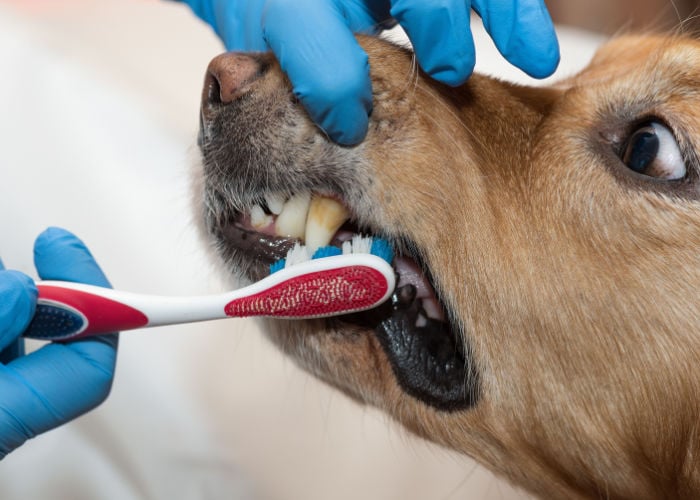 Bleeding gums in dogs can be caused by numerous things. The hard part is to figure it out.

Dog gums bleeding can be the result of as simple as cuts and scrapes, a foreign object stuck between their teeth, or rotting teeth.

Puppy teething is also a common cause of bleeding gums for puppies below eight months old.

However, it can also be caused by dental diseases like Gingivitis and Periodontal disease.

Keep in mind that it is best to notice these things as soon as possible because Periodontal disease is irreversible, unlike Gingivitis.

As pet owners, we must monitor our dogs. If we ever see something unusual like the bleeding of their gums, it's highly recommended that you should talk to your vet immediately.

RELATED: DOG GUM PROBLEMS: WHAT TO LOOK OUT FOR