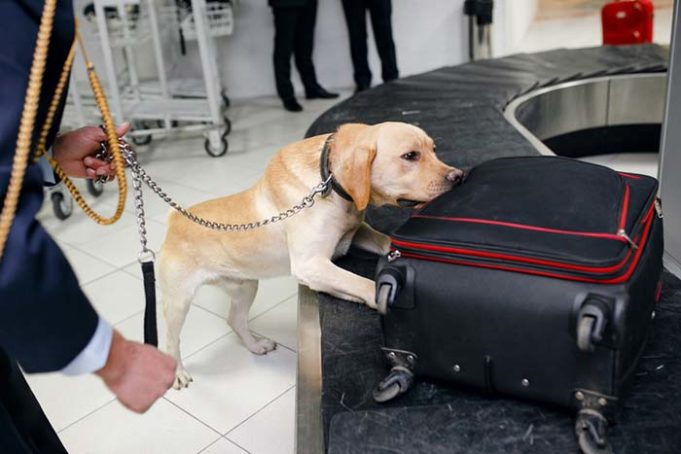 Training of explosives detection dogs could be improved by analyzing the vapors dogs detect in real-time, according to a new study.

Ever wonder how and why dogs are used to detect bombs? It all rests on their noses. Now, science is helping explosives canines do an even better job in their life-saving role.

Dogs have a sense of smell that is about 100x times stronger than that of a human. Because of this, they are considered the most reliable source of explosives in any number of situations. But, there is always room for improvement.

In a recent study published in the the American Chemical Society‘s journal Analytical Chemistry, researchers reveal that newer and more rigorous training of the canines and their handlers could result after conducting real-time analysis of the odors canines detect when they are exposed to explosives.

Explosive detection dogs are trained to detect odors from chemicals like nitroglycerin, TNT, and others. This scent detection is a crucial first step in the process of defending against attacks with these weapons (such as terrorist attacks, which frequently use these chemicals).

The problem until now has been figuring out how to deliver a low-concentration vapor of these components during training sessions. It’s dangerous to produce or emit these chemicals to any extent, but it must be done if the dogs are going to learn to recognize them.

When samples from different explosives mix around in the air and cross-contaminate, this can alter results and confuse both the dogs and their handlers. To get a grip on this issue, the team (led by Ta-Hsuan Ong) set out to get a better understanding of the odors of all the components contained within explosives, which set off a dog’s reaction.

Interestingly, this spectrometer actually helped the dogs prove their accuracy even further. While it was originally believed that dogs were making mistakes by identifying “blanks” as explosives, this spectrometer actually detected vapors in the blanks that were a result of cross-contamination. So, the dogs were accurately detecting explosive materials even if the human handlers believed the samples to be free of chemicals.

Based on these discoveries, scientists are now suggesting that this real-time vapor analysis be used to help differentiate canine errors from cross-contamination and other issues which arise during training.

This science will only help to ensure improved accuracy among bomb-sniffing canine units, who are already the gold standard in explosives detection as it is.