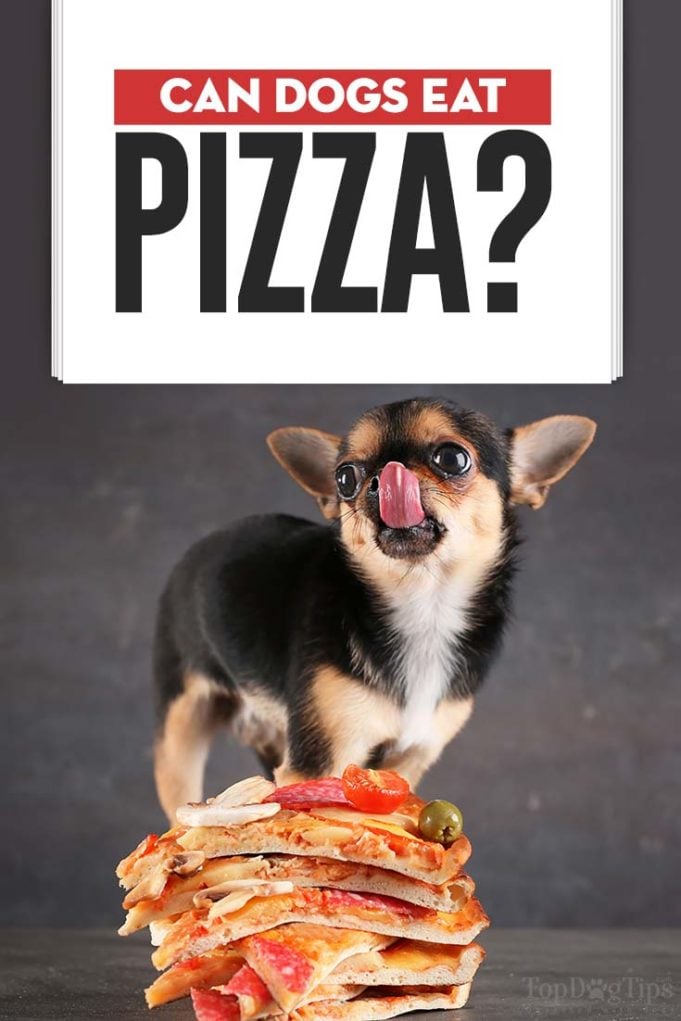 Pizza is a long-established, go-to food enjoyed by many people around the world. Brought to America by Italian immigrants in the late 1800s, pizza is now considered a traditional American meal often made or ordered for dinner and frequently the food of choice for parties. But can dogs eat pizza as well, or is pizza bad for dogs?

If you've been wondering, “can I give my dog pizza,” the answer is NO – feeding dogs pizza is not recommended. While most dogs would enjoy a slice of pizza, this is simply not a good food choice for them because of poor nutritional value and side effects.

In this article, we'll discuss more about what pizza is made of, can dogs eat pizza ever, what would be the benefits (if any), and is pizza bad for dogs and why.

Pizza is cooked flatbread topped with cheese and tomato sauce. It is often combined with toppings ranging from meats to vegetables to spices and condiments. Pizza can be made fresh or stored frozen and sold as a whole pie or by the slice. It is one of the most popular forms of fast food in America. 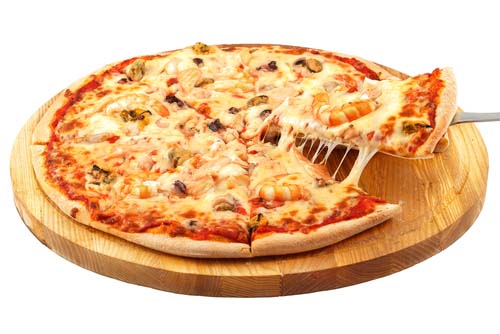 Pizza consists mostly of cooked bread dough, sauce, and cheese formed into a pie-shape. It is a very delicious but not very nutritious food. Add a variety of toppings, and it can become an even less healthy choice. But what about pizza for dogs? Can dogs eat pizza or is pizza bad for dogs at all times and any form? 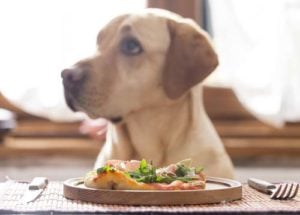 Can dogs eat pizza at any time, and is there a reason to give pizza for dogs? No – dogs should not eat pizza ever. There is never a reason to feed pizza to your dog other than satisfy those begging eyes, which would only make the matters worse.

Just about any dog would happily wolf down a slice of good pizza, but that doesn’t mean pizza is a good food selection for them. Some of the ingredients used in the pizza may be good for the dog when given separately in a fresh form; however, most of the toppings are not beneficial to your dog’s health and may, in fact, be dangerous. Even potentially good ingredients aren't suitable, since they are likely to be salted or have sauce on them.

Majority of pizzas will also use processed meats. We've previously investigated how harmful processed meats are for dogs in our bologna meat article. To sum it up, studies have shown that processed meats cause cancer, obesity and heart disease in humans and animals alike (1, 2, 3, 4).

While giving your dog a small bite of pizza may not cause severe damage to your dog’s health, it may at the very least result in an upset stomach. Feeding pizza to your dog on a regular basis, however, can lead to more serious health complications in the future.

There are no benefits of pizza for dogs

Can dogs eat pizza and get at least some of the benefits from the toppings on the pizza? The answer is no – none of the foods on a pizza are likely to be suitable for the dog.

There is little to no nutritional value in pizza for dogs, and some of the ingredients included in the pizza or used to garnish the pizza can be outright deadly for some dogs.

It's best to stay clear of pizza when looking for a tasty treat for your dog, and instead choose from a variety of other great snacks for dogs that are not hazardous to dogs' health and even provide health benefits and carry a good nutritional profile. Instead of pizza, try giving your dog natural peanut butter or canned pumpkin.

5 Potential Side Effects of Pizza for Dogs

1. Cheese does not mix well with dogs’ natural lactose intolerance. 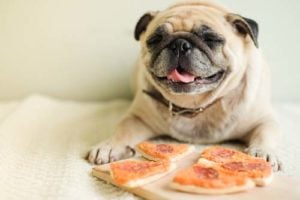 Because cheese is a dairy product, and because most dogs are lactose intolerant and not designed to digest milk products, pizza with cheese topping will make digestion problematic for canines.

Additionally, the cheese varieties used in pizza are very high in fat content, which is not healthy for dogs and difficult to digest.

2. The onions and garlic often used in pizza are dangerous to a dog’s health.

Two ingredients often used in or on pizza, garlic and onions, are known toxins to dogs. Both of these foods are part of the allium family, contain thiosulfate, and cause irreparable oxidative damage to red blood cells. Studies have shown it does not take a significant amount of garlic or onion to produce harmful changes in a canine’s blood.

The symptoms of onion or garlic poisoning won’t be evident until a few days after consumption when damage has already been done. Dogs can suffer from hemolytic anemia, a life-threatening condition. Other symptoms of anemia include:

3. Tomato sauce is not healthy because of its high sodium content.

While tomatoes in and of themselves are not a harmful vegetable to a dog, when they are used as the sauce for pizza, significant amounts of salt, along with more sugar and spices, are added to the tomatoes to make the pizza sauce.

High sodium content is not safe for dogs to ingest. It can cause immediate gastrointestinal issues, and further health concerns, like high blood pressure and heart disease. Exposure to large quantities of sodium may even be deadly to a dog.

4. Heavy oils in pizza have adverse impacts on a dog’s body.

What pizza isn’t oily and greasy to some extent? People might like the taste of that, but it can do a number on our digestive systems. Well, it does the same to a dog’s stomach. Oils mean excess fats, and dogs have a hard time digesting that much fat.

Over the long term, a dog who regularly eats pizza is likely to gain weight and become obese, setting off a chain reaction of dangerous illnesses such as pancreatitis.

5. Pizza crust can lead to obesity over time. 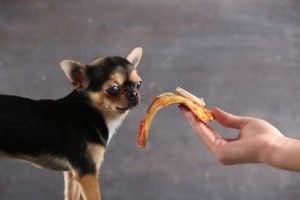 Dogs who eat pizza might especially enjoy the crusts, which are not directly harmful. However, the crust is mostly sodium and carbohydrates and provides no nutritional value to a dog.

With time, those crusts will add up and can result in obesity for your dog. Dogs who are already obese or who have a tendency to overeat may face serious health problems in the future.

So can dogs eat pizza or is pizza bad for dogs? The answer to this is very clear – no, dogs should not eat pizza ever, especially as a regular part of their diet.

There are too many potential dangers in both the ingredients and in the toppings to justify giving pizza to your dog and putting his health at risk.

Stay clear of giving any type of fast food or junk food to your dog. Instead, opt for safer and healthier options to treat your pet, such as blueberries or bananas.

READ NEXT: 9 Superfoods for Dogs That Improve Their Health (According to Science)