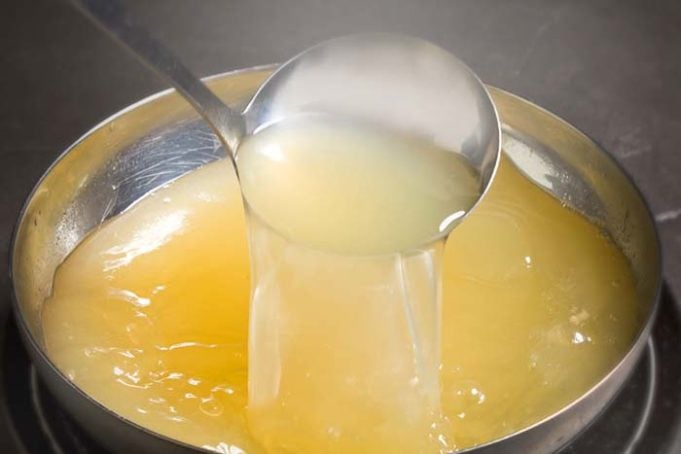 Giving dogs chicken broth made from a bone base (also known as bone broth) is all-the-rage among dog lovers and nutritionists. Nevertheless, dog owners might not fully understand what chicken bone broth is, exactly why it is good to feed, the benefits of doing so, and where to buy it, or how to make it at home. Here's everything you should know.

Adding chicken broth to a dog’s diet can be beneficial for any dog, of any age, on any type of diet (as long as your dog is not allergic to chicken). The main concern with introducing broth into a dog’s diet is understanding the differences between the many different types of broths that can be found at your local grocery store, because many commercially produced and sold broths are not particularly healthy or beneficial. Even worse, some store-bough broths contain ingredients that can be toxic and harmful to dogs.

The best way to be certain that a broth is safe, healthy, and beneficial for your dog is to make it at home. Making homemade chicken broth for dogs is actually easy. Properly made, dog-safe broth has a multitude of positive effects and benefits when fed to dogs, and it can be given to dogs on a consistent basis.

Benefits of Chicken Broth for Dogs 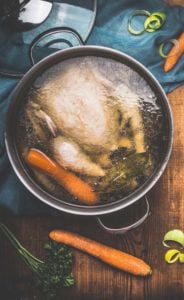 Beneficial Minerals. A dog can never get too many minerals, and chicken broth, which is packed full of a plethora of beneficial minerals can help provide a dog with vital minerals that they may be missing out on in their day-to-day diet. Broth specifically contains calcium, magnesium, phosphorus, silicon, and many other health-promoting nutrients.

Better Joint Health. Because broth is made using bones and cartilage, there is an abundance of joint-health-promoting, and protecting gelatin and collagen in the broth. And because the collagen within a dog’s body is also boosted by eating broth, doing so is incredibly helpful to a dog’s overall joint health. Broth is also a great source of glucosamine and chondroitin, both of which have been demonstrated to support overall joint health. A dog’s joints can also be improved by regularly consuming broth, which effectively relieves and reduces joint pain. Adding broth to older dog’s meals is often recommended instead of giving them expensive supplements to help with their joint-pain, and other health issues that are caused by aging.

Body Detoxification. Broth is filled to the brim with detoxifying and health-promoting amino acids, including glycine. Glycine is an amino acid that helps to detox a dog’s kidneys and liver. Therefore, eating broth will cause the body’s detoxing organs (liver and kidneys) to function better by detoxing them, which will allow these vital organs to better detox the dog’s entire body.

Helps a Leaky Gut. The glycine found in broth also helps to protect a dog from being affected by leaky gut, which is a digestive disorder in which a dog has holes in their gut that are so big that they lead to problems with digestion. Glycine blocks these holes and reduces their size, helping to better this condition in a dog.

Relief from Upset Stomach. Chicken broth is a very soothing food that is effective at helping to prevent a dog’s stomach from becoming inflamed, in addition to having many detoxing ingredients that can assist a dog in getting over a short-term digestive problem, more quickly and comfortably.

Sensitive Tummy Solution. Broth rarely upsets a dog’s stomach and will not cause any negative side-effects when consumed, and is therefore a great option to feed to dogs that have sensitive digestive systems, and is perfect to give to dog’s that suffer from general food allergies and sensitivities.

How to Make Homemade Chicken Bone Broth for Dogs 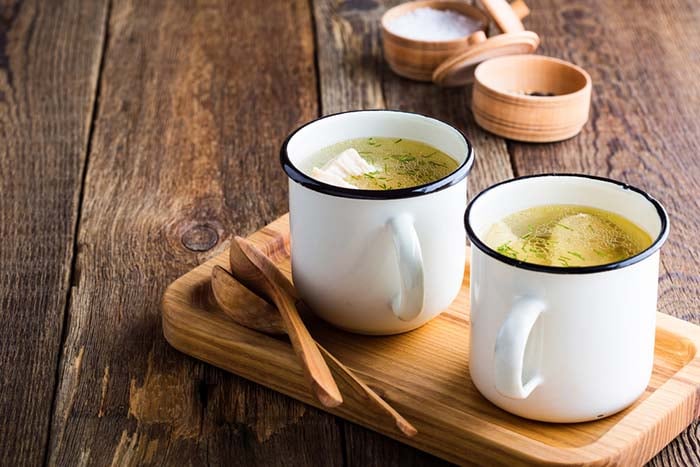 Step 1:
Select and Place Chicken or Bones in a Large Crockpot or Regular Pot

Step 4:
Strain the Bones Out

Chicken broth for dogs that will healthy, nutritious, and safe can sometime be found wherever healthy broths and bone broths are sold (such as a health food store or homeopathic nutrition store). Here are some guidelines to follow when selecting a store-bought broth for your dog:

You can also find some good options online, such as on Amazon. For example:

Note: In general, broths that are meant to be eaten by humans are likely to not be healthy for dogs to eat due to all of the additional salt, herbs, and other ingredients that are added. Even low-sodium options can be not so great for a dog, because they still contain more than the maximum amount of salt that a dog should have. Most experts recommend only feeding dogs broth that is made by boiling chicken and/or bones in water and a splash of vinegar, for the healthiest, most nutrient-dense, beneficial, and dog-safe version of broth.

READ NEXT: The Best Dog Food for Dogs with Sensitive Stomachs 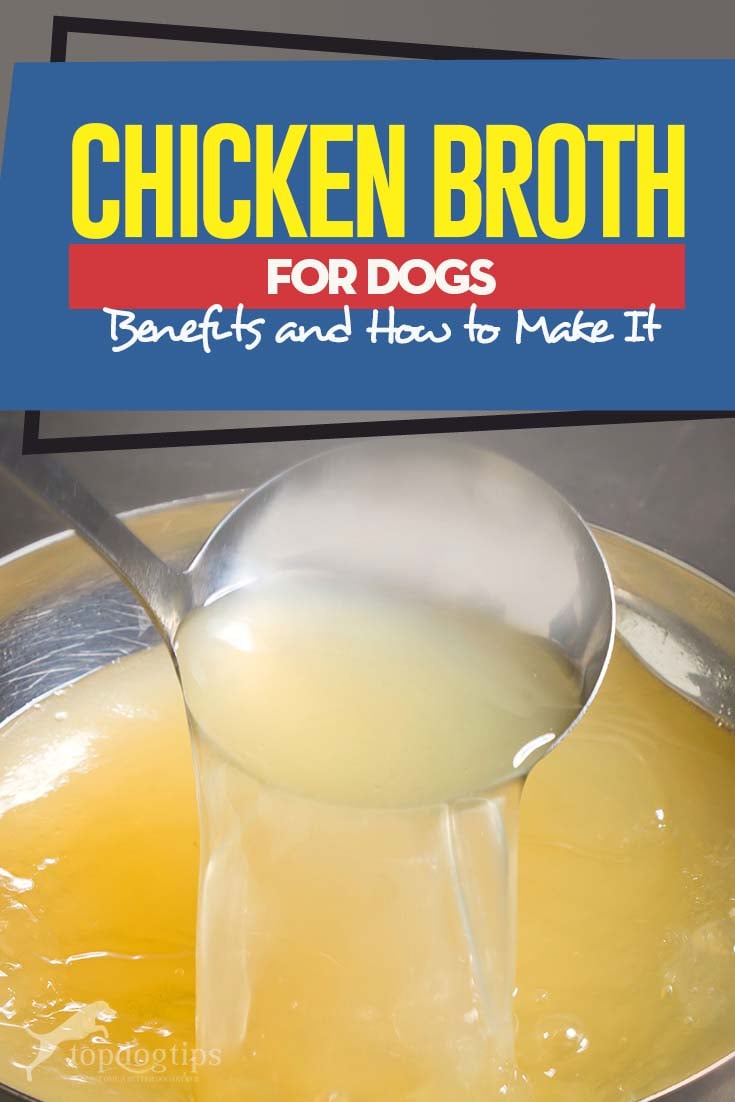 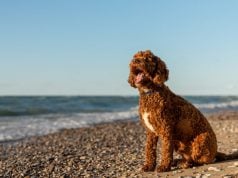 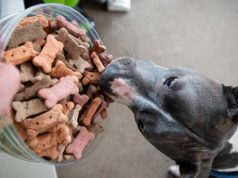 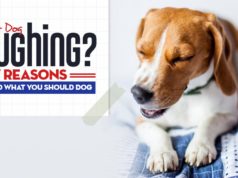 Dog Coughing: 7 Reasons Dogs Cough and What to Do

Does Your Dog Have a Blood Blister? Here’s What to Do 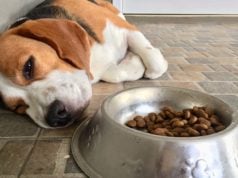 10 Ways to Help a Dog with an Upset Stomach

Katrina Jamora - Aug 2, 2021
Dogs who have the Poodle mix are often endearingly nicknamed doodle breeds. It's one of the most popular mixed breeds globally, and for good reasons,...

Rachael Leanny - Aug 2, 2021
Dogs that are quickly losing weight or cannot gain weight to reach their healthy and normal body weight stage can be at risk of...

Dog Coughing: 7 Reasons Dogs Cough and What to Do

Nadia Aslam - Aug 2, 2021
Dogs can develop a cough for various reasons, as disconcerting as it can be for the owner to hear. Keep in mind that a...

Does Your Dog Have a Blood Blister? Here’s What to Do

Shelly Graves - Aug 2, 2021
Blood blisters, or hematomas, are blisters that form on your dog and are filled with blood. If you ever see a blood blister on...

10 Ways to Help a Dog with an Upset Stomach

Diana Beth Miller - Aug 1, 2021
All dogs will experience stomach upset issues at some point. In most cases, that is not a cause for concern, and this issue will...