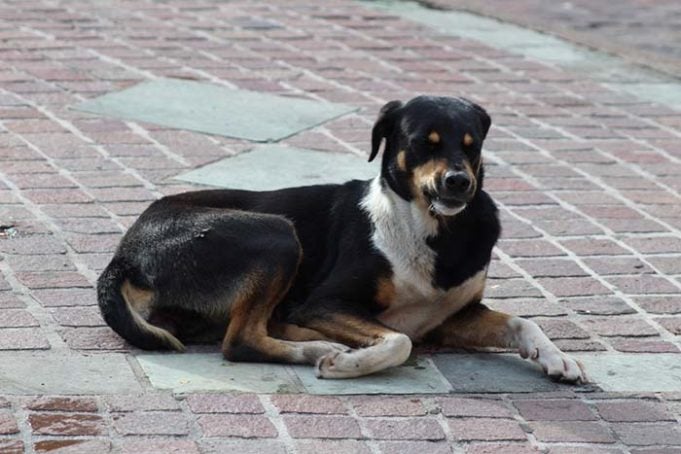 Cabron is quite well known in a small town market in Mexico, where he’s often seen buying salchichas, aka sausages.

A stray dog named Cabron that lives in the streets of Mexico has recently won the hearts of netizens around the world because of a viral video. In it, he's shown begging money from the people near the market where he is often spotted.

Cabron apparently uses the money he begs from passersby to buy himself salchichas (sausages) from a store that sells snack foods. Serch Vasquez, who works at a bottled water stall, took the video of Cabron in action and shared it on Facebook.

Give the dog money

Vasquez said that he was one those Cabron asked money from. The dog scratched Vasquez's leg to get his attention.

A driver who was watching the man's encounter with the dog told Vasquez to hand Cabron money. So, Vasquez did as told and then decided to film and follow the dog to see what he'll do with it. He saw that Cabron headed straight to a storefront window to “buy” his food using the money he received from Vasquez.

But the story doesn't end there. It turns out that the owner of the store has long adopted Cabron as her pet, so the dog didn't really have to “pay” for his food. Only, Cabron's mom doesn't really like giving him free food each time he begs.

Cabron's owner, however, did not teach him to ask money from people. Locals in the market, who are so familiar with Cabron's antics, speculated that the dog perhaps figured how he can get food on his own by observing how his mom worked. He noticed that she would give people the sausage snack if they give her “those small and rounded stuff” they took out of their pockets and wallets. So, Cabron found a way to do get those to give to his mom, too!

Vasquez said that there's something really special about Cabron and some visitors of his mom's store are equally delighted to see him pay for his food.

Handling a dog that begs

But while Cabron showed extreme cleverness, begging for food might be considered a discipline problem for other pets. It's not uncommon to see dogs begging under the dining table while their owners eat. Worse, if there are guests in the house, the dogs also try to beg for food from them at the dining table.

The best way to handle a pet that begs for food is to not give in. If you feed the dog each time he begs, you're only reinforcing the bad behavior.

As much as possible, also try to avoid eye contact and refrain from touching or talking to the dog, even if he looks at you with those irresistible puppy-dog eyes. Even if you don't give the dog any food, the behavior will not stop if you show a speck of attention because begging is an attention-seeking device.

In some cases, you might need to confine your dog in a different room or temporarily place him in his crate, if you're having a meal with a larger number of family and friends. It's also not advisable to give your dogs any leftovers from your plate because the next time you have your meals, he will eagerly wait for you to do this again.

According to PetMD, it's actually all right to give dogs foods that people eat occasionally, such as sausages. However, it shouldn't happen when you're having meals on the table. Give your pet his treat at a specific time or situation, such as if he followed your command to sit and stay.

READ NEXT: How to Train a Dog to Stop Begging in 6 Simple Steps