You can improve your aging dog's mental health and keep cognitive decline at bay with the help of computer stimulation, according to this new study.

Can elderly dogs use computers and, more importantly, does it benefit them in any way? Science has already shown us that brain exercise benefits human patients with degenerative diseases. But new research from Vetmeduni in Vienna has further proved that mental stimulation is essential for senior dogs, and even discovered a new way to keep the brain of our aging pets healthy and stimulated.

“The positive feeling created by solving a mental challenge is comparable to the feeling that older people have when they learn something new, doing something they enjoy.”

The age-old problem was always that senior dogs aren't capable of going through the type of training that younger dogs can to keep their mind in good shape. But this team of cognitive biologists found that computer stimulation can act as a viable alternative to physical exercises that older dogs may not be able to do anymore. So, it may indeed be possible to teach an old dog new tricks – with computers.

This is the case for many pet owners: when you have an older dog, you instinctively reduce the amount of exercise that you would provide to a younger puppy. That doesn't mean you're a bad owner (many of us do this instinctively); it might seem to you that your dog doesn't need them anymore and he just prefers sitting on the sofa all day.

But this will likely lead to your senior dog's health deteriorating even quicker.

Physical activity stimulates not just the muscles but also the brain. Previous research has found that older dogs with reduced levels of mobility also suffer from mentally degenerative diseases a lot more often. As a result of this, scientists from the Messerli Research Institute at Vetmeduni Vienna have made a groundbreaking proposal at the Fourth International Conference on Animal-Human Interaction.

Based on their new research findings, they proposed a touchscreen computer for dogs – a device very similar to an iPad, with special software designed specifically with old dogs in mind. The apparatus will ensure that your favorite pet can stay stimulated even in old age.

The answer to that question, surprisingly, is yes. Computer games are, on their basis, just a series of patterns. And with enough training, dogs can be taught to recognize, anticipate and work with those patterns. As a result, their brains are actively engaged and stimulated.

Another effect of the touchscreen devices is that they increase dopamine production in older dogs, which, according to the study, is normally very low in senior dogs. Cognitive skills training makes your elderly pooches happy – even chemistry is there to prove it.

Besides, it's a common misconception that dogs can't learn nearly as well when they're older. The study disputes this too, showing that just after a few tries, the oldest dog in the test group was already using the touchscreen devices. And of course, a few extra stimuli with the promise of a dog treat reward also helped. 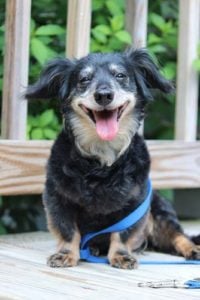 RELATED: How to Recognize Cognitive Dysfunctions in Dogs and What You Can Do to Help Them

From the Laboratory to the Living Room

The study doesn't just propose the design for the dog-computer interaction devices. It also hypothesizes the effects that these will have on the dogs' relationship with their owners and the positive effect on the dogs' well-being. But first, for this to take place the experiment needs to be moved towards dog owners rather than scientists.

The lead researchers in the study have expressed a desire to collaborate further with engineers and dog trainers to find ways to improve the software and, potentially, ensure that it's available to owners of senior dogs who'd like to give their pet a better way to spend their golden years.

“Our scientific approach could result in an exciting citizen science project to increase the understanding of the importance of lifelong learning in animals.”

That's not the only benefit that'll come from this study. We don't know a lot about how dogs' brains behave in old age and we really should – especially seeing that it might lead to improving dogs' overall well-being.

The researchers point out that we tend to assume that dogs age in the way that humans do; however, at the moment we don't really know if dogs forget things because of old age or because of lack of stimulation. Further research will try to answer these questions later on.

Either way, the team's discovery of the engaging software is definitely a breakthrough in this under-researched aspect of dog behavior and cognitive decline. The scientists involved have stressed just how important it is to understand that lifelong learning benefits our pets, too.