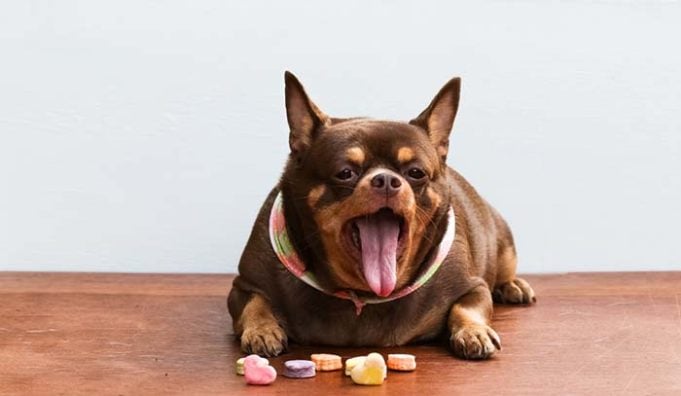 Scientists are finally beginning to study dogs' gut microbiome and how certain dietary choices affect it, and this new research demonstrates how ratio between carbohydrates and proteins is related to obesity in dogs.

We already know how much of our health is affected by bacteria in our guts, but we knew very little if the same can be said about dogs and their diet. Now, unsurprisingly, we're seeing that there's indeed a direct correlation between bacteria in dog's gut and obesity.

In a paper published in mBio, researchers from Nestle Purina PetCare Company show us how dogs being fed a high-protein, low-carbohydrate diet demonstrated better digestive health. In particular, these dogs were found to have decreased ratios of Bacteroidetes to Firmicutes bacteria (which are correlated with obesity) as well as improved gene networks which are associated with weight loss in humans.

These improvements were more pronounced in overweight and obese dogs than in dogs with healthy weights.

This study may help in the effort to manage pet obesity going forward, which has been a huge problem on the rise for decades. More than half of dogs today in the U.S. are overweight or obese, according to a recent annual survey.

ASK A VET: How to Put an Overweight Dog on a Diet?

Studies like this suggest that the issue is only growing worse in pets and humans alike. Accordin to Johnny Li, a computational biologist at Nestle Purina, dog obesity is an epidemic. Li launched (and led) this study because before now, only a small number of previous studies looked into the factors affecting gut microbiomes in dogs. The effect of canine diet on the gut microbiome has not been well documented.

But human studies have already made the connection between health and gut microbial balance. Poor balances have already been linked to various conditions, including metabolic syndrome, cardiovascular disease, obesity, immune disorders, and diseases of the brain and liver.

Details of The Study

Li and his team looked at 32 labradors and 32 beagles, with an even split between obese/overweight dogs and dogs of healthy weight.

Initial fecal studies showed little difference in gut microbiomes for dogs during the first four weeks. But during the experimental second set of four weeks, dramatic changes were observed.

Because the changes were more dramatic in obese and overweight dogs, Li suggests that these candidates are more susceptible to dietary intervention. So, changing the diets of those dogs may have a greater impact on their guts’ bacterial balance.

What This Means for Our Dogs

Though this study only looked at two dog breeds, Li says the results are likely applicable to all dog breeds. But he does suggest that more studies will be needed in the future to be sure of this.

Although these initial findings are among the first of their kind and are only preliminary, Li says that this research provides the foundation to further explore the connection between diet and gut microbes in dogs. Li hopes to eventually see this work translate into real-world solutions to canine obesity, such as modified pet foods and the strategic implementation of probiotics and prebiotics in pets’ diets.

If you think your dog's weight may be improved by a modified diet, talk to your vet and get the latest information on your options.

Latasha Doyle - Jul 19, 2021
Dog ears come in various shapes and sizes; floppy, folded, small or large. Unlike humans, a dog's ears are a central feature of the...

Katrina Jamora - Jul 19, 2021
There are several factors to consider in ensuring your new dog has a healthy genetic history. We went through hundreds and finally found 40...