Home Dog Care Dog Tail Docking: 5 Dangers of This Procedure (Based on Science) 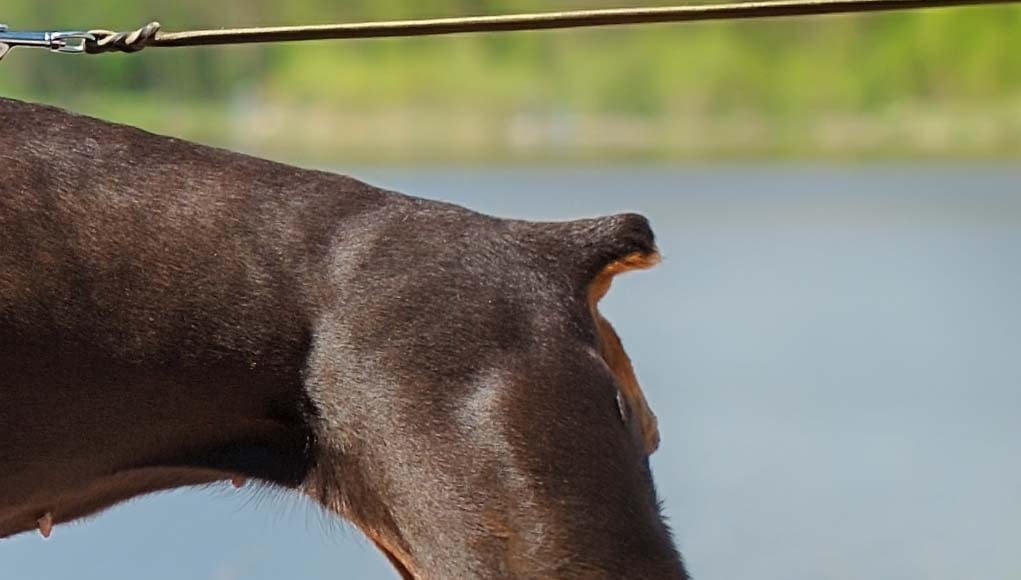 Its first intention was to protect hunting dogs because their tail made them more vulnerable to prey or adversary attacks (2).

In England, for example, this began a normal surgery in 1786, used to indicate working dogs and get a tax cut for that (3).

But even after the tax cuts were removed, the procedure stayed.

Those surgeries gave rise to perceived breed standards that still exist today, as well as to purely aesthetic criteria.

About 1/3 of dog breeds had docked tails due to the tradition of it, and there are various “pro-dog tail docking” groups that exist (4).

But nowadays, this tradition is considered inconvenient for the animal by animal lovers, is not recommended by veterinarians, and is generally frowned upon in the veterinary field.

Tail docking in dogs has been banned in Europe back in 1998, and banned in Australia, but it remains legal in the United States and parts of Canada.

In antiquity, the concern with animal welfare was almost non-existent.

It was not until the early 19th century that the first critical voices appeared (5).

Veterinarians in particular have long been opposed to tail docking in dogs not only because of the suffering the surgery causes, but also because of the methods used to achieve these aesthetics on the dog.

In 1839, the professional English journal The Veterinarian published the first essay against dog caudectomy.

The journal's author, Sir William Youatt, claimed that there was no need for such intervention.

In a book for the Society for the Prevention of Cruelty named “The Obligation and Extent of Humanity to Brutes”, Youatt also wrote the following, describing the methods of dog tail docking (6):

“…Then the tail of the dog does not suit the fancy of the owner. It must be shortened in some of these animals, and taken off altogether in others. If the sharp, strong scissors, with a ligature, were used, the operation, although still indefensible, would not be a very cruel one, for the tail may be removed almost in a moment, and the wound soon heals; but for the beastly gnawing off of the part – and the act of drawing out the tendons and the nerves – these are the acts of a cannibal; and he who perpetrates a barbarity so nearly approaching cannibalism deserves to be scouted from all society.“

The opposition to tail docking in dogs kept growing from there.

In 1989, Australian Veterinary Association carried out a survey where 86% of responses were against dog tail docking, calling the process as “barbaric” and “pointless” (7).

In 1992, a similar questionnaire was done by UK British Small Animal Veterinary Association, and among 3,300 veterinarians that were asked, 92% agreed with banning tail docking (7).

Veterinarians today still say they sometimes have to dock a dog's tail simply because they can do it better and more humanely (8). Some shelters and breeders will do this procedure anyway, but they don't have good enough training or tools. Nevertheless, most vets are raising awareness against this surgery – let's see why. 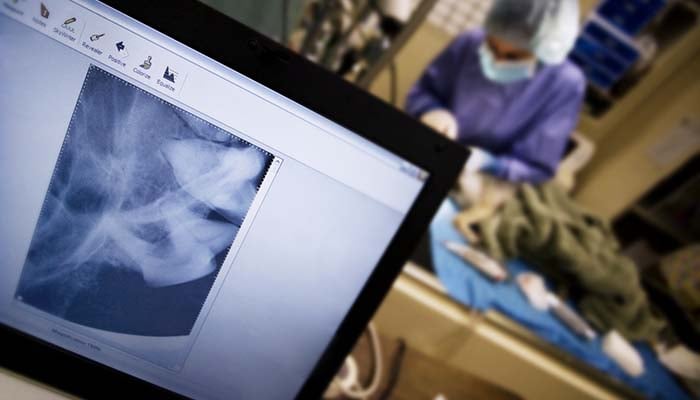 Canine caudectomy is not a simple cut, but rather an amputation.

Unlike nail or hair cutting, which are part of the regular maintenance routine and do not involve any associated trauma, dog tail docking involves cartilage, nerves, blood vessels, and other tissues besides the skin that are amputated (1).

In cases where this surgery is required due to medical reasons, dogs receive analgesia and general anesthesia as if it were a major intervention.

Tail docking for aesthetic reasons, however, is typically done on young dogs, sometimes just a few days old (2). In such cases, anesthesia is not applied, thus resulting in the suffering of a dog because the nerves that process pain have already developed from the fetal stage of the puppy.

The reason for not applying anesthesia when tail docking puppies is because originally it was believed that puppies will not feel any pain during the surgery due to incomplete growth.

However, the opposite is actually true.

Young dogs will have much lower nociceptive thresholds and will feel even more pain than adult dogs (9).

Veterinarians argue that also like any surgical procedure, this puts the animal at life risk due to using general anesthesia alone, creating an unnecessary danger simply for aesthetic purposes.

Also, procedures not performed by a qualified veterinarian (such as in shelters or breeders) increase the risk of complications during and after the practice.

One of the main arguments against dog tail docking is that it can be associated with the development of neuromas and chronic pain, which will affect the dog’s behavior, and it may increase pain sensitivity in some animals.

Any surgical procedure performed on dogs should guarantee the absence of pain, but this isn't always the case with tail docking.

While there's very little research in exactly how much pain dog tail docking causes to canines specifically – and due to dropping popularity of this procedure, we're unlikely to see any studies – there are some papers suggesting increased stress in dogs due to rise in cortisol and increased heart rate (2).

Moreover, research with other animals with docked tails do in fact show pain and suffering.

For example, three studies with calves, piglets and lambs demonstrated how tail docking caused them distress and acute pain (11, 12, 13).

Complications were observed after this surgery (14, 15). The most common ones were:

Infections were common when no hygienic and sterile conditions were guaranteed.

In addition, there may also be problems with healing, leaving the wound at risk of continuous opening.

Finally, cosmetic tail surgery in dogs resulted in muscle atrophy (muscle mass weakening), which can then lead to fecal incontinence.

Several cases in the past have also manifested in urinary incontinence (14, 15).

Serving as continuity of the dog's spine, their tail is composed of vertebrae and other important tissues to keep the animal’s balance (17).

When running, turning and making certain movements, a dog needs the tail, which acts as the “helm of the ship.”

It has been observed that most animal species that require speed and agility have a tail, so it might represent an evolutionary advantage.

Other than physiological pain during the procedure, another argument against tail cutting in dogs is related to these post-operative locomotion problems, a dog's behavior, and neurobiological parameters that are negatively affected (18).

Along with oral communication (barking, grunting, groaning), the dog is able to send messages to their peers using tail movement, which transmits key information for a dog seeking to socialize with other dogs (19, 20, 21).

A dog's tail motion and positioning indicate to other dogs whether the tail owner is friendly, or fearful, or playful, and their state of aggression, submission or dominance (22, 23).

Canines without a tail are at a social disadvantage, and it has been studied that they can exhibit compensatory behaviors, such as the movement of their rear and being able to generate “misunderstanding” with other animals of the same breed.

Studies also show that dogs with docked tails tend to be more aggressive (22, 24).

Dogs on the receiving end are also at a disadvantage here, because they can't properly understand the signals from a tail-docked dog (20).

It also affects a dog's communication with humans.

For example, children may be afraid of dogs without a tail because they associate a “tail wagging” movement with the animal being happy, and the absence of it might be interpreted as the animal being angry.

Effects of Tail Docking in Dogs: What Veterinary Organizations Are Saying

With the exception of specific cases where the health of the dog is affected (tail fracture, tumor removal or complex injuries), the amputation of the dog's tail does not have medical purposes to support it.

It is a merely aesthetic procedure, and vets continue to fight against it.

In August 2011, the World Small Animal Veterinary Association (WSAVA) – formed by 57 international associations of veterinarians with 55,000 members from 50 countries – issued a statement at their General Assembly with the following guidelines (PDF):

Even before the WSAVA's statement, back in 2001, the Federation of Veterinarians of Europe (FVE), which constitutes the 28th advisory organization in the European Union, issued its statement (PDF) and set its position against all surgeries on pets for non-curative purposes, including tail cutting, ear cutting, nail removal, and resection and third phalanx.

At the time of this writing, out of the 25 countries in the European Convention for the Protection of Pet Animals, only six of them have signed as being against tail docking in dogs.

Overall, more dog lovers and professionals from different fields every year are looking down upon this procedure, and dog tail docking continues to be phased out. However, more efforts are needed to ban tail cutting in dogs altogether, especially in the U.S. and Canada.

Dog tail docking is a cosmetic surgical procedure and is not recommended by most veterinarians.

It can generate huge complications in a dog's life and even lead to death when not done by a professional, not counting the pain to which the animal is unnecessarily subdued.

So, why do we continue to do this? Because it's a “tradition”? 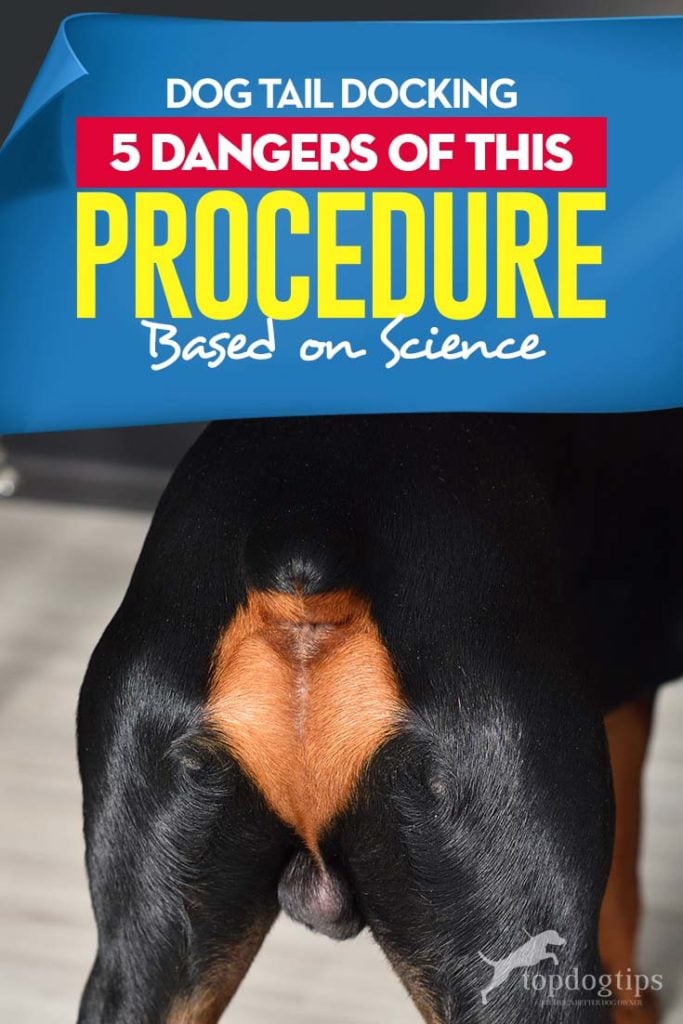