We all know that giving your dog too many treats isn't healthy, but a new study has found that most dog treats actually exceed the daily nutrient allowance needed for a healthy adult dog. Because they contain a lot of unnecessary sugars, preservatives, and other supplementary ingredients, a single dog treat might be more than the all the food intake your dog needs for one day.

If there's one reigning king in the pet food industry, that's dog treats. All dogs love scrumptious little bites of goodness, or chew sticks, or anything else that they can get their paws and jaws on. But we as dog owners need to seriously ask ourselves about the nutritional value of most popular dog treats that are continuously marketed to us, and how this feeding pattern measures up to our dog's normal day-to-day food intake.

Scientists from the University of Padua have published a study in the BMJ's Vet Record journal to warn dog owners of the dangers of overfeeding their pet using dog treats, and particularly how majority of dog treats are likely to exceed the daily caloric allowance for your dog. This is the first study of its kind to be done on dog treats. The main aim was to check the daily recommendations for food intake in dogs as provided by the World Small Animal Veterinary Association (WSAVA).

According to WSAVA, all the dog treats that your dog ingests in one day should only form about 10% of their energy intake. However, when testing several brands of well-known dog treats in different shapes and forms, the scientists found something much different and certainly not what pet owners would've expected.

Just What Is in Your Dog's Favorite Treats? 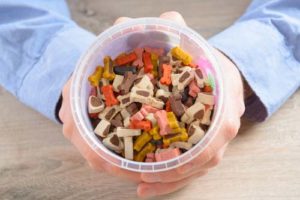 The sample group the scientists used for the study consisted of a total of 32 most popular brands of dog treats, widely available in supermarkets. We already knew that some dog treats are healthier while many other brands are best to be avoided. This study only confirmed the fears of many pet owners trying to avoid treats altogether.

One of the first issues identified with these tested dog treats was the unclear information on the packaging. According to the study, 3 out of 4 brands of dog treats had ingredients not clearly described on their label, such as ‘cereals' or ‘meat and animal derivatives.' ‘Sugars' was another common one and the analysis showed that there were different kinds of minerals in the treats, not all of which could fall under the ‘sugar' classification.

Another treat to look out for – according to researchers – are rawhide chews. Most of these had 25% of the regular energy intake for small sized dogs, which is more than double the recommended amount by the WSAVA.

The only dog treat that came out somewhat positive were dental dog treats and sticks. All analysis of different kinds of dental sticks came back below 10% of the daily energy intake for dogs of all sizes – that is of course if you follow the feeding instructions on the package.

It's refreshing to see scientists finally testing the accuracy of dog food and dog treats packaging, which helps to keep manufacturers more consistent in what they make for our dogs.

As with any study, there are limitations. The researchers admit that their sample group was small and the results would benefit from a study on a wider, more global scale, looking into products that are specific for different countries.

The researchers also point out that greater care should be taken to label the packaging of treats for dogs that may suffer from heart failure and kidney disease – as the hidden minerals in dog treats may cause for their condition to deteriorate.

The main conclusion they reached was that producers of dog treats need to be more cautious in the way they label the ingredients on their packs.

READ NEXT: Are Rawhide Dog Treats Safe for Dogs?