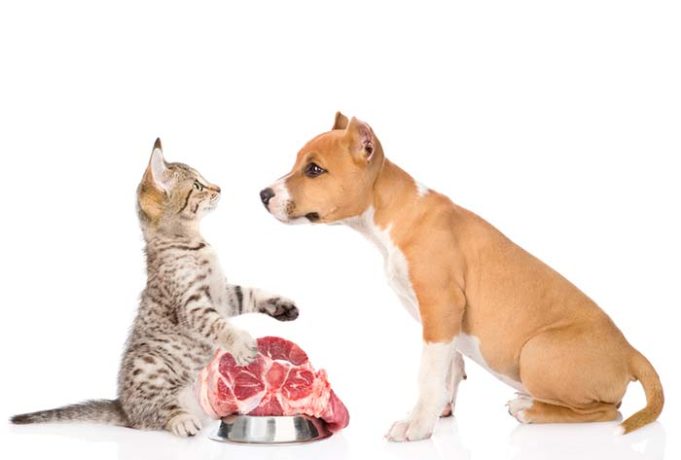 The food we feed our cats and dogs has a large environmental impact, and there are good ways how to reduce your pet’s carbon footprint.

If our pets were to go set up their own country, this four-legged nation would rank #5 in global meat consumption, with only Russia, Brazil, the U.S. and China (a nation of over 1 billion) in front of them.

While we really cannot – and should not – avoid feeding our pets meat, the good news is that there are some ways to reduce this portion of the carbon footprint.

Many people are choosing to eat less meat (or no meat) now, and this helps to significantly reduce the environmental consequences of meat production. There are now even vegetarian dog food brands available.

Perhaps you are one of the many people in the U.S. who has chosen to be a partial or full vegetarian. But have you ever wondered what impact your pets’ meat consumption is still having on climate change?

UCLA professor Gregory Okin wondered just that, and set out to get the facts. He calculated that the diet of U.S. cats and dogs creates about 64 million tons of carbon dioxide every year. This is the same amount produced by driving 13.6 million cars around for one year.

And what goes in, must come out. In this country, our pets produce over 5 million tons of feces every year – this is how much poop 90 million Americans make annually.

If all that poo were put in the trash, it would compare to the amount of trash produced by the entire state of Massachusetts.

There are tons of studies out there looking at the environmental impact of human meat consumption. But few have ever crunched the same numbers with our pets’ diets. While American humans’ meat consumption produces 260 million tons of carbon dioxide from livestock production every year, doing the same analysis for our cats and dogs yields interesting results.

How Did Okin Do His Calculations?

Okin had to begin by using publicly available info, such as the number of cats and dogs in the country, and the ingredients found in the leading pet foods.

It turns out that dogs and cats eat around 19% as many calories as humans in this country. When adjusting for the ratio of meat contained in their diet (higher than ours), Okin calculated that our pets consume about one fourth of all the calories derived from animals in America.

What Inspired This Research?

Okin is a member of UCLA's Institute of the Environment and Sustainability, and is usually found researching other things, such as wind erosion, desert landscapes, and dust bowls. He looks at how these things can impact climate and ecosystems.

One day, while he was pondering the growing trend of backyard chickens, Okin had an interesting train of thought. He marveled at how cool it is that chickens are vegetarians, yet they produce protein for us to eat. Yet, many other pets get their protein from meat. This eventually led him to wonder how much meat our pets collectively consume.

Some general trends contribute to the numbers Okin found.

First of all, many high-quality pet foods contain more animal products than lower quality options. And with more people wanting to buy healthier options for their furry family members, this means meat demand is on the rise.

So, How Can We Reduce This Impact?

In Okin’s mind, many people want their dogs to eat human-grade meat, but the dog can actually manage to eat parts of the animal a human cannot.

“A dog doesn't need to eat steak. A dog can eat things a human sincerely can't. So what if we could turn some of that pet food into people chow?”

Okin proposes a better commitment to “snout-to-tail” consumption – using as many parts of the rendered animal as possible (such as the Native Americans practiced). Okin believes this could dramatically reduce national meat consumption.

Okin points out that cultural differences and media hype contribute to a lot of waste.

Different cultures have different standards for what they eat. Someone raised in a small lakeside town in Michigan might not find chicken feet appetizing, but Asian cultures sure do.

There was also the 2012 controversy around “pink slime,” which is actually edible beef. But because many people find it unappetizing, it is deemed unsuitable for consumption. But according to Okin, it is a good and cheap protein source.

The environmental impact of pets’ meat consumption isn’t only an issue in the U.S. In countries like China and Brazil, pet ownership is also on the rise.

The paradox around people becoming more educated about the environment is that as this occurs, people are choosing to eat less meat – but also to get more pets at the same time.

RELATED: Can Dogs Go Vegan? The Ins and Outs of Vegetarian Diets for Dogs

As an environmentally conscious vegetarian with 4 animals of my own, this certainly is a dilemma.

Should we stop feeding our animals meat?? In most cases, the answer is a hard no. In fact, this is oftentimes a fatal decision. It is possible with dogs. In fact, we offer up plenty of vegetarian dog food recipes! But usually this is only done for occasional meals, or in cases of meat allergies.

A vegetarian diet is extremely difficult with cats (who require taurine from meat more than almost any other mammal), and this attempt is usually impossible unless strictly overseen by a veterinarian.

And should all humans stop eating meat? This is up to the individual.

Okin stresses that he is a meat eater who is in favor of continued meat consumption for humans. But, he points out that those who continue to eat meat need to at least have an informed conversation about their dietary choices – and this includes the diets of the pets we look after.

Okin sees no easy answer. Pet ownership has countless benefits, such as emotional and physical well-being, and this cannot be discounted.

People who are very concerned about meat consumption in their household can choose to get vegetarian pets, such as hamsters or birds.

But the good news is, it’s not all on the individual. The pet food industry itself is starting to progress toward more sustainable practices. This could help reduce overfeeding, and eventually we may be able to find alternative protein sources.

While this issue is complicated and serious, Okin says it is important to just relax and have a sense of humor about it. He recommends everyone get a little pony that not only can afford them more exercise, but can mow their lawn for free.