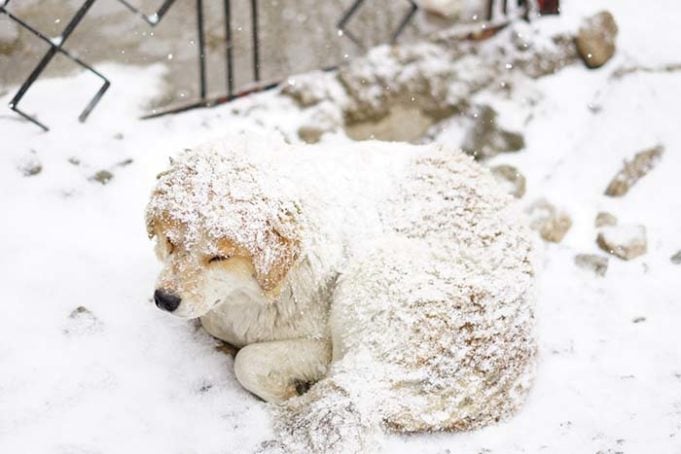 Dogs are being found frozen outside nationwide, and the law is finally cracking down on people for their cruelty.

This past month has seen record low temperatures during a cold snap which has rendered it impossible for mammals to live outside. Yet people are leaving their pets outside to freeze to death.

In Hartford, Connecticut, a woman was charged with animal cruelty after her dog was discovered tethered to a dog house and frozen to death on New Year’s Eve.

In Toledo, Ohio, another dog was found frozen to death on a front porch, and three additional dogs were discovered frozen to death in Franklin County, Ohio. One of those owners was charged with cruelty to a companion animal.

Animal rescue organizations and local authorities were prompted by such incidents to issue public warnings about the issue.

Ohio’s Sherrif Richard Jones made a Facebook post urging people to not leave their companion animals outside, and reminded the public that freezing to death is horrible way to die. He also informed people that the local dog warden provides straw at no cost for animals in outdoor kennels.

In Michigan, Detroit Dog Rescue found a small Pomeranian mix left abandoned outside its offices, and the dog had frozen to death overnight. This rescue organization did manage to rescue another dog that day who was found shivering and cowering in a barrel outside. Unfortunately, that dog suffered frostbite not only to his feet, but to his private parts as well. They reported that his feet were so painful that he could not even manage to stand on them.

Also in Michigan, a dog in Flint got hit by a car, and then a nearby person watched him sit outside for a whole 24 hours before calling local authorities. When rescuers showed up, they had to peel the dog off the ice. He was barely alive, but did thankfully survive. The rescue is seeking out his owner or a new home for him.

With these stacked up incidents, authorities wish to remind people that the cold snap is not over. We are facing more days of brutally cold conditions, with many regions reaching temperatures of -30 to -40 degrees with wind chill.

Humane Society of the United States president chief executive Wayne Pacelle is asking the public to help animals get inside at this time. He urged people to remember that cats, dogs, and horses depend on us to keep them warm. They cannot keep themselves warm and need shelter at this time.

RELATED: Is It Too Cold To Leave Your Dog Outside?

The public should also remember that several states and local jurisdictions actually have modified laws in their regions in recent years to come down more harshly on people tethering their animals outside to suffer harsh conditions.

While these laws vary, offenders in general will face charges of cruelty as severe as felony-level, especially if the animal dies.

If you are concerned about walking your dog outside, here are some tips issued by the ASPCA:

If you see an animal suffering outside, you can call your local authorities or 911 and remain anonymous while reporting the issue.