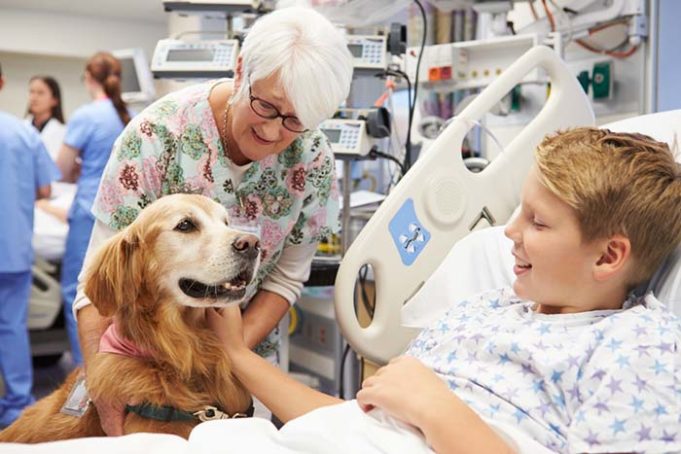 Researchers are looking to dogs for help in finding better treatment options for cancer in humans – particularly, children.

Osteosarcoma (bone cancer), for example, functions identically in both species. Dr. Kanna says if a pathologist looks at human and dog osteosarcoma under a microscope, there is no difference observed.

Dr. Kanna works at Oncology Services in Springfield, Virginia. He also spent a number of years working at the National Cancer Institute, researching the links between cancers afflicting both canines and children.

According to the American Cancer Society, most osteosarcomas occurring in humans afflict children and young adults. Typically, this cancer attacks the long bones of the legs or arms, and sometimes the pelvis.

Osteosarcoma is the most common bone tumor among canines.

The similarities shared by humans and dogs is the tumor location, the tumor’s microscopic features, and the pattern of the spreading of the cancer.

Theresa Beech lost her young son Daniel to osteosarcoma; he was diagnosed at age 11, and passed away 2 years later.

Beech says Daniel had to undergo 130 nights in the hospital, 15 operations, 20 rounds of high-dose chemotherapy, clinical trials, and other ordeals.

There was only one treatment option available for Daniel; it was approved by the FDA in 1979, and involves the “big guns” of chemotherapy.

Frustrated by the lack of better alternatives available, Beech did her own research. She began looking into the genetics of osteosarcoma, hoping to find drugs used to treat other forms of cancer. She then came across research being conducted on dogs with osteosarcoma.

RELATED: A NEW CANCER DRUGS THAT INCREASES SURVIVAL IN DOGS

One of the biggest struggles science faces with finding better options for kids with osteosarcoma is the lack of a good model for clinical trials. The process can be complicated, and osteosarcoma is not a cancer that can wait. It often proves fatal very quickly.

But Beech knows of several things being tried out now with dogs; if the drugs they’re using prove successful, they may be able to transition some of these treatments over into human kids.

Hope for a Cure

The Canines-N-Kids Foundation was founded last year with a single mission: Raise awareness and funds for research on canine and childhood cancers, in order to tackle them.

Dr. Kanna is excited about this collaboration, as well as the studies being conducted on canine cancers. According to Kanna, if the new drugs improve outcomes for dogs, they will then be prioritized for evaluations in the treatment of childhood cancers.

Osteosarcoma is one cancer being researched with this purpose in mind, but it’s not the only one. The National Cancer Institute has several clinical trials being conducted which look at similarities in dogs and adults sharing types of cancers such as melanoma, lymphoma, and soft tissue sarcoma.

READ NEXT: The Ultimate Guide for Raising Kids with Dogs