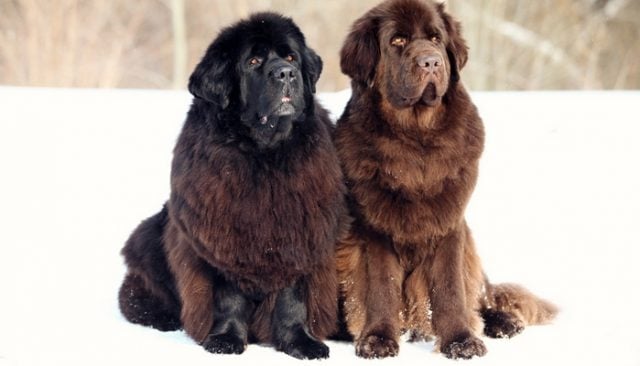 This family has two giant dogs that protect their children, and they might just be the perfect family dog! This incredibly large breed of dogs, called Newfoundlands, may look like bears, but they are gentle and friendly. This is a non-aggressive breed that is loyal and affectionate.

This family with three kids decided to take their time making their decision about which pets to get. They wanted to make sure to get a breed that would get along well with their kids. As they expected, the dogs immediately bonded with their two boys and now practically go everywhere with them.

These dogs keep an eye out for the boys, and it’s like having an extra set of eyes to protect the kids. The Newfoundlands are bigger than the children, but the parents are not afraid of them hurting their kids.

Newfoundlands are known to be good with children.

RECOMMENDED READ: Adopting a Dog That Fits Your Lifestyle

Look at how happy these kids are playing with these adorable dogs. The smiles on their faces indicate they truly enjoy their company. Allowing kids to have a connection with nature can be very helpful in their development. These kids love to play with their dogs, and chances are they would choose those giant furry babysitters over the television.

Having dogs teaches children a sense of responsibility too. They learn how to think about the needs of someone else by feeding them and letting them out to use the bathroom. Children can show affection and be shown affection even more with dogs like Newfoundlands.

While their brains are still developing and their personalities are as well, what better role model for children than a kind hearted and loving breed like Newfoundlands?

We love that the Fisher family is sharing their lives with their dogs on Instagram, because the photos are so cheerful. Bee and Joshua are now parents to five! Their lovable Newfoundlands, Boss and Ralphie and their three boys. Let’s just say that the car is pretty full, and not just with dogs and people – but lots of smiles.

These sweet dogs are possibly the best babysitters a kid could ask for. In our fast paced technology culture, a big fluffy animal reminds us not to forget about all the lovely animals that we share the planet with.

RELATED: Do Your Dogs Know How to Be Around Kids?

Male Newfoundlands can grow to be up to 150 pounds. The females can weigh up to 120. If you’ve not already fallen in love with this breed just by seeing the pictures, you might after you meet one. They are cuddly and soft, just like a teddy bear.

It’s like every child’s dream come true, a best friend giant! Newfoundlands are actually in the “giant” category because of their weight. This breed comes from Canada, and they were originally bred as working dogs, which is why they aim to please their owners. They love to swim and do well in climates that are not humid because of that thick furry coat.

Newfoundlands are used to being with people a lot and love to have a job, so giving them the job of watching kids will make them happy. Alright Newfoundlands, you’re hired! And folks, this is one babysitter you don’t have to worry about being on their phone texting or just plopping the kids in front of the TV. Newfoundlands will play with your children and help them explore their imaginations.