Scientists have discovered more clues as to why dogs have significantly more sensitive noses than humans and how their sense of smell developed.

From the mammalian perspective, dogs and humans have nearly identical physiology. But when it comes to the olfactory system, dogs trump over humans with their powerful noses and substantially stronger sense of smell – something they're known for. Their noses are so powerful that dogs can even sense shapes and sizes of objects.

“We can use this to help understand why dogs, for example, have such a good sense of smell. They have extremely complex turbinate structures, and now we know some of the details about how those structures develop.”

A new study from researchers at the Washington University School of Medicine may shed more light on why dogs have such sensitive noses compared to man. In short, it's a stem cell that may be the key to understanding how a dog's nose work. Their findings were published in the journal Developmental Cell.

The researchers learned that this sheet of tissue stretches to the turbinate systems located in a dog's nasal cavity. The experts also found a stem cell that may have a connection to the growth of the turbinates and the development of the olfactory epithelium. They named this stem cell as FEP.

Researcher Lu M. Yang expressed in the press release that they were not aware it was possible for a tiny epithelium to expand and synchronize with the turbinates until their study. This perhaps explained how a dog's nose is able to have larger amounts of neurons that can catch and process more molecules. 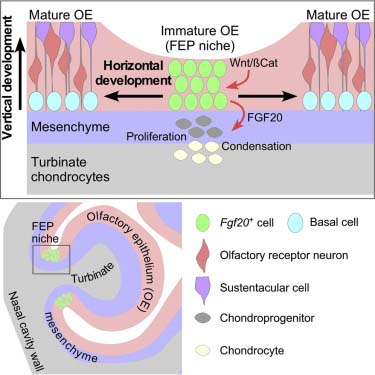 The experts hope to learn more about the mechanisms of this sheet of tissue in further studies with mice. They plan to work on normal mice and genetically enhanced mice with blocked FEP. Yang is hopeful that the next phase of their study should shed more light on why dogs have a great sense of smell.

And while we may envy our dogs their strong sense of smell, we can find comfort at least in one thing – the fact that dogs have their favorite smell, and it's their owner's smell.

While all dogs have great sense of smell, there's a number of dog breeds that have been tested and found to have the best sense of smell. The top three are: 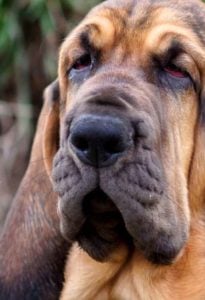 Among the breeds of dogs with sharp noses, it's the Bloodhound that tops the list. According to experts, these animals have 40 times more olfactory cells than humans and the actual size of their olfactory epithelium could be the largest among other canines.

For centuries, authorities have used Bloodhounds as working scent dogs to help identify trails of scents. So powerful are their noses that experts say these dogs can follow a trail that extends up to 130 miles. Bloodhounds are the detectives of the dog world and Nick Carter is its most well-known dog detective to ever exist. With over 650 successful tracking, Nick Carter helped put 126 criminals in prison.

Beagles follow Bloodhounds when it comes to their great sense of smell. Because these dogs are built smaller and trimmer than Bloodhounds, they are a lot easier to work with. They're also tidier because Bloodhounds can be slobbery.

A Beagle's floppy ears also help with tracking scents along with their discriminating noses. When they follow a trail, these dogs flap their ears to bring the molecules of the scent closer to their nose.

Next to the Beagles are the Bloodhounds' cousins, the Basset Hounds. French aristocrats used Basset Hounds for hunting rabbits many centuries ago. Like the Beagles, these dogs also use their ears to work with their noses for tracking scents.

However, Basset Hounds are less determined and more stubborn about their work than Beagles. Because of their low built and stubby legs, this breed picks up more dirt on the ground so they need to have frequent baths. It is believed that Bloodhounds have 300 million smell receptors in their noses, while Beagles have 225 million. Basset Hounds, on the other hand, have 220 million.