New study proves that dogs can “smell” shapes and sizes of objects. Your pooch is likely able to tell the difference between a stuffed toy and a ball simply by using his nose.

A new joint research by the Max Planck Institute and the Friedrich Schiller University in Jena has shown that dogs' excellent sense of smell is even more advanced than we initially thought. When following a scent, dogs create a mental image of what they expect to find at the end of the trail. This is an underexplored area in canine behavioral science, which can lead to great breakthroughs.

Dogs have a mental representation of the object they're after when following a scent.

Sometimes, you may think that Hollywood's representation of dogs' sense of smell as being amazing and life-changing across the board for all breeds is a bit overstated for dramatic effect. I mean, would you ever task your dogs with finding a missing child or fishing out a drug overlord? I wouldn't, mainly because I don't really trust my dogs to do something as simple as fishing my socks from under the bed.

But more new studies have demonstrated that I'm likely wrong. This new research shows that dogs aren't only great at recognizing where things are using their noses, but they can actually figure out the shapes and sizes of different objects depending on how they smell.

Scientists from the Max Planck Institute, along with other researchers from the Friedrich Schiller University, have recently found out that dogs actually create a sort of mental image of the object that they're after when they're trying to find it by its scent. This study was published in Journal of Comparative Psychology.

To address how dogs may understand shapes and sizes of things, the researchers used two focus groups of dogs – 25 trained police dogs and 23 house pet dogs.

The scientists expected dogs who were surprised with the unscented toy to act differently. This did happen in the first run through when the dogs hesitated and were still looking for the toy that was scented. But as the experiment was repeated, the dogs began playing with the toy they encountered at the end, regardless of whether it was the scented toy or not.

This drove the researchers to the conclusion that dogs have a mental representation of the object they're after when following a scent. More research needs to be done in this direction, but initial results point towards the fact that dogs can tell whether they're looking for a ball or for string or for a bag full of drugs. 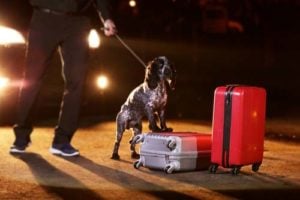 The results can be very useful when it comes to police dogs, especially bomb-sniffing K9 units. It's often the case that, when looking for explosive devices, even the people in the bomb crews wouldn't know what they look like. Explosives can be made from various things and look different.

However, knowing that the dog can create a rough image of what they're looking for just by picking up the scent can leave us breathing a bit lighter – they know what they're doing. That's all fine about police dogs – after all, that is their job. But what about our house pet dogs?

Well, initial runs of the test did show that professional dogs found the toys quicker. However, as the test was repeated, again and again, the home pets started matching up with the speed of their professional counterparts.

Researchers are adamant that further study is needed to understand the connection between perception, cognition, and behavior in dogs. This only goes to show that sometimes, Hollywood does get it right after all.

READ NEXT: The Importance of Nose Work for Dogs and How to Train Them