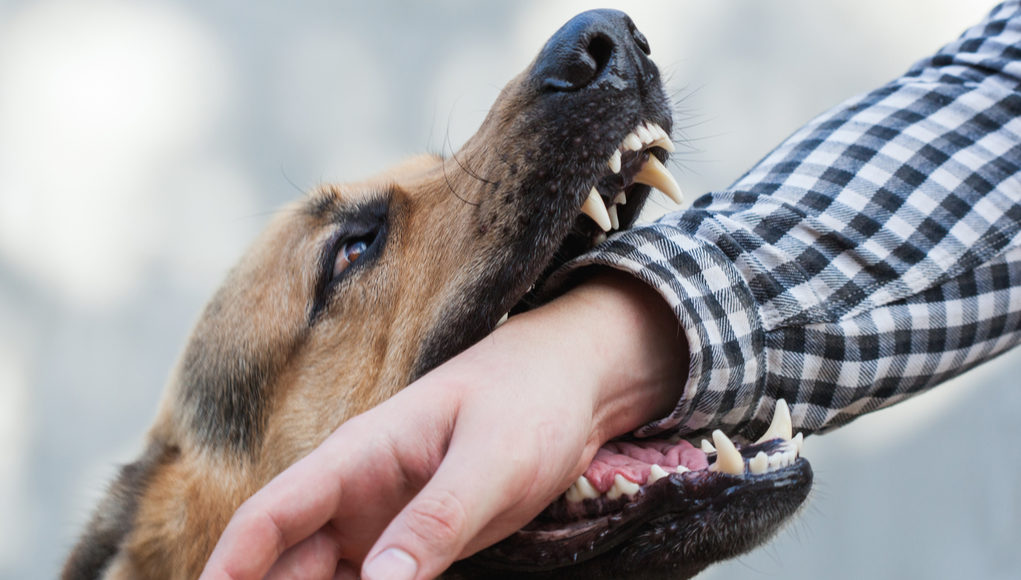 This article presents you with the ten meanest dog breeds, whether they are the most aggressive or the most dangerous, or both!

It will come as a surprise to you that a Chihuahua and a Basenji are more likely to be listed as one of the meanest dog breeds.

These dog breeds are more prone to attacking their owners than the Rottweiler, American Bully, and Doberman. 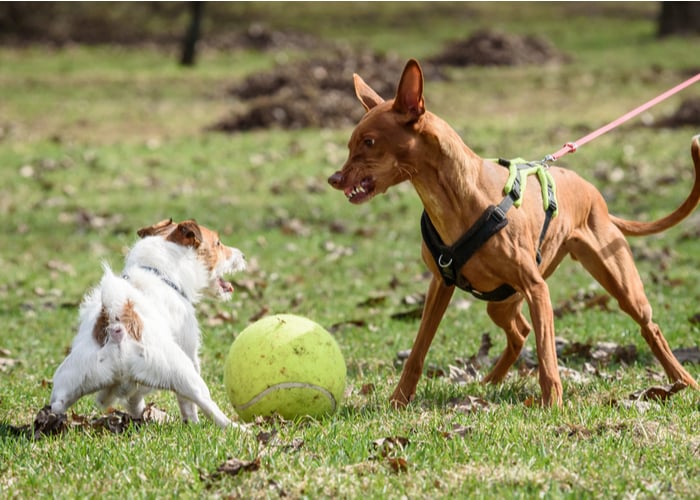 What is Canine Aggression?

A dog with high prey drive will be more likely to act according to its hunting instincts when confronted with small animals.

But this is also different from being dangerous or aggressive.

People need to understand that dogs' aggressive behavior to humans is triggered by fear, not due to the dog's hunting instincts.

The causes of canine aggression range from territorial defensiveness and protectiveness to fear and social anxiety.

What Are the Reasons for Canine Aggression?

Some aggressive dogs do not continuously live their lives as aggressive pets.

Instead, they become aggressive when presented with these specific circumstances:

Dangerous and aggression are far different based on the statistics.

Yet, larger dogs are continually known as the “dangerous dogs” and have their bites tracked, skewing the statistics with what dog breed gathers the most attacks.

When insurance companies decide to put up dog breeds in the “dangerous dogs” list, they label it as “damage potential”:

Also, the damage potential is what insurance companies use to evaluate the dog breed. They would often ask, “How much damage does this dog cost to a person or property when they attack?”

These damages result in larger dog breeds often labeled as the most aggressive, when in fact, it's the dog breeds that barely reach their kneecaps that deserve the title.

How to Determine Which Dog Breeds Are the Meanest?

Determination of the aggressiveness of different dog breeds is through the temperament test.

The American Temperament Testing Society presents other dogs with various stimuli to see their performance in specific situations.

Whereas dogs with high passing percentages are less likely to be aggressive.

Also, note that these tests are still not well-established, but they give insight into which dog breeds tend to display aggressive behavior towards another individual. 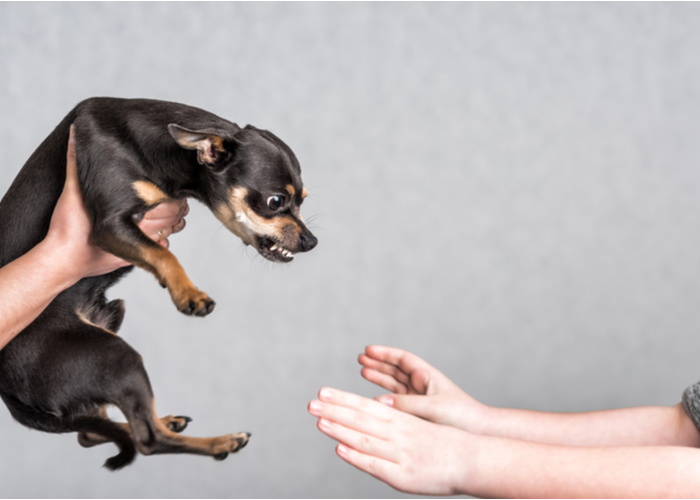 Chihuahuas are the smallest dog breed registered in the American Kennel Club (AKC).

They belong to the “toy” breed of dogs, and their weight ranges from four to six pounds.

The hair of chihuahuas can be long or short of any color, and the coloring can be solid, marked, or splashed.

Chihuahuas originated from Mexico and are one of the oldest dog breeds in America. They are famous for being one of the meanest breeds.

Chihuahuas can be so devoted to their owners to the extent of jealousy and may cause them to bite or snap at individuals who try to get too close to their owners.

They are very temperamental, which causes them to be not child-friendly. Chihuahuas bark a lot at strangers and can pass as a watchdog. 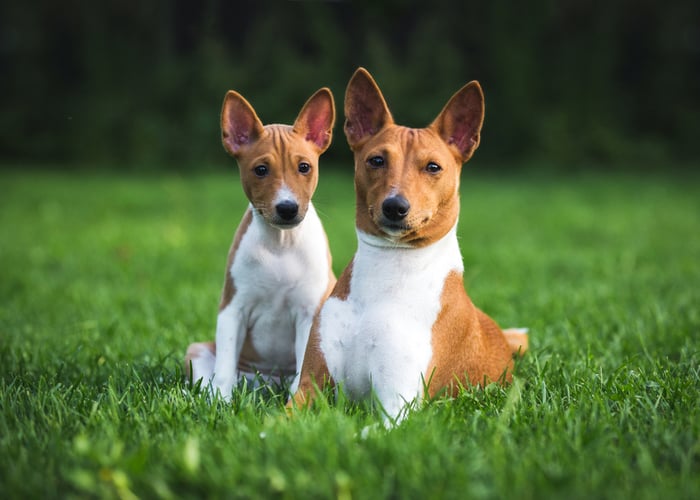 This dog breed originated from Central Africa and can pass as one of the most aggressive dog breeds because of its difficulty to train.

Basenjis have a high prey drive and activate their hunting instincts to small moving animals.

Despite being aloof and reserved towards strangers, they can quickly attack home intruders without warning.

If you plan on owning a Basenji, it's best to talk with a professional trainer to give you a heads up on what this breed can do. 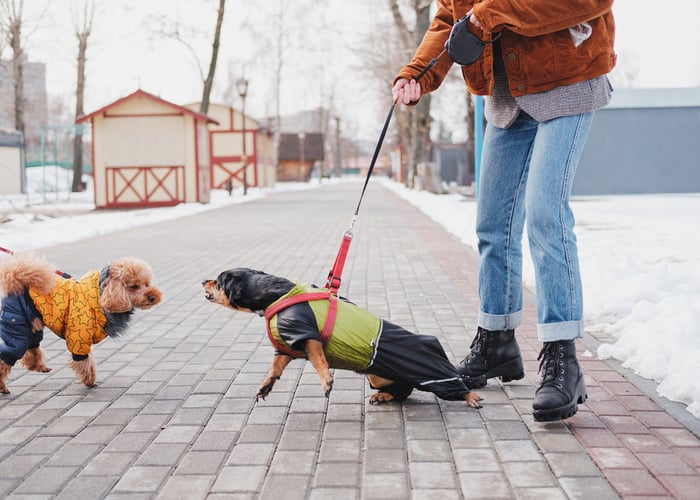 Also, they rank as the most aggressive against people and other animals.

A Dachshund originates in Germany and exists to hunt badgers. The short legs of Dachshunds allow them to follow badgers into their dens and kill them.

Up to this date, Dachshunds still have their strong prey drive, so it's not advisable to have them mingle with small animals.

They become aggressive if not appropriately trained. 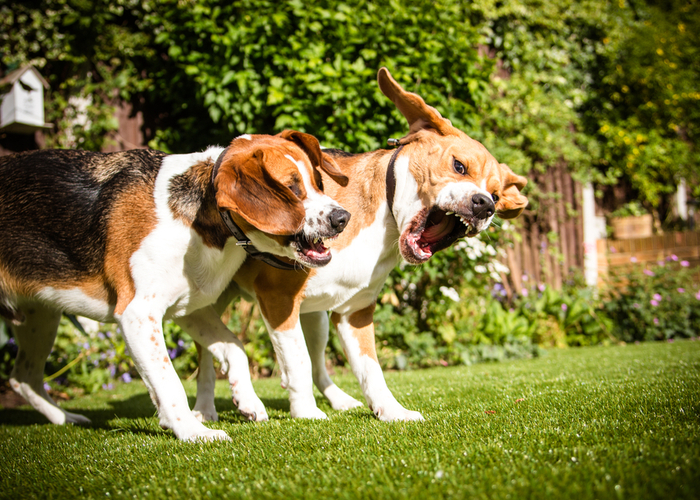 Beagles are both security dog and hunting dog that uses their excellent sense of smell.

However, they are also very stubborn and are not a good listener to their owner.

They also tend to be violent when not given what they want.

Children shouldn't have eye-to-eye contact with a Beagle as this can provoke him and may bite off the child, making Beagle one of the meanest dog breeds. 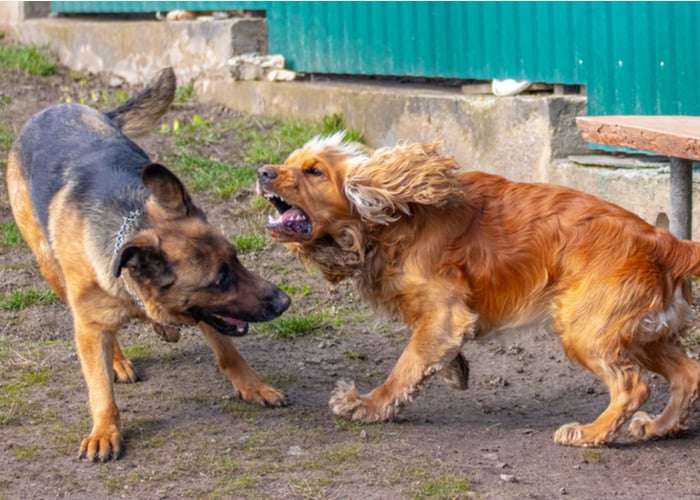 Cocker Spaniels are loyal, affectionate, and needy at times. They're one of the best family pets to have with this personality.

Note that red or gold-colored Spaniels are more aggressive and likely to attack their owners and strangers without provocative actions.

Also, they are prone to rage syndrome. A syndrome that turns a dog into a biting frenzy with no trace of triggers.

Cocker Spaniels are responsible for over 59 fatal attacks over the last 25 years. 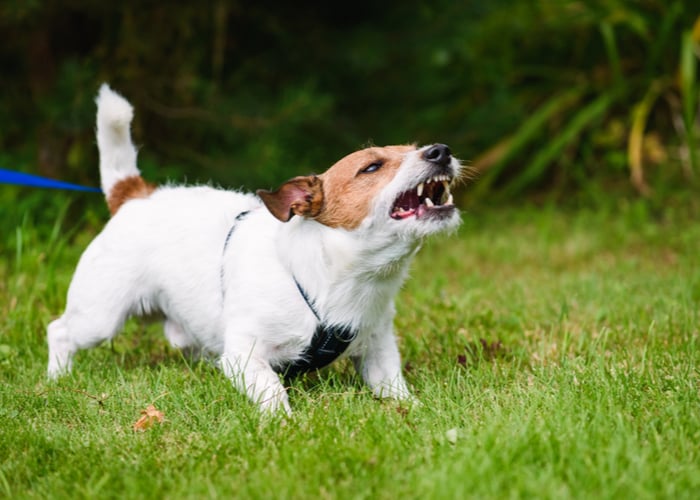 In general, Terriers are born to hunt rodents and small or medium-sized vermin. An instinct that doesn't go away, and a Terrier will act hostile towards other people and animals without proper training and socialization.

Common examples of Terriers are:

On the other hand, there are also several breeds of Terriers that includes larger species and exist as farm working dog or guard dogs.

Examples of this are bully breeds that pull down bears and bulls: 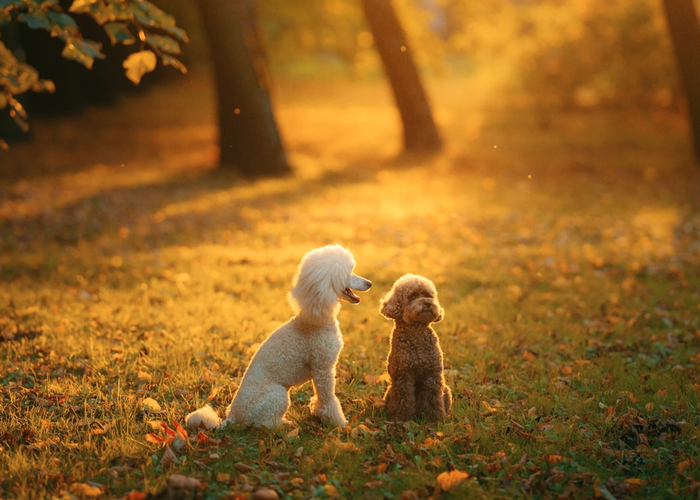 The biting of other people and animals is one of the defense mechanisms of this breed. Unfortunately, a Toy Poodle will interpret an attack when a stranger considers playing.

Aside from being restless and aggressive when left alone, Toy Poodles also have a small dog syndrome. This syndrome is from the anxiety and insecurity of being a small breed.

Also, urine marking is more visible on this breed than any other breed. 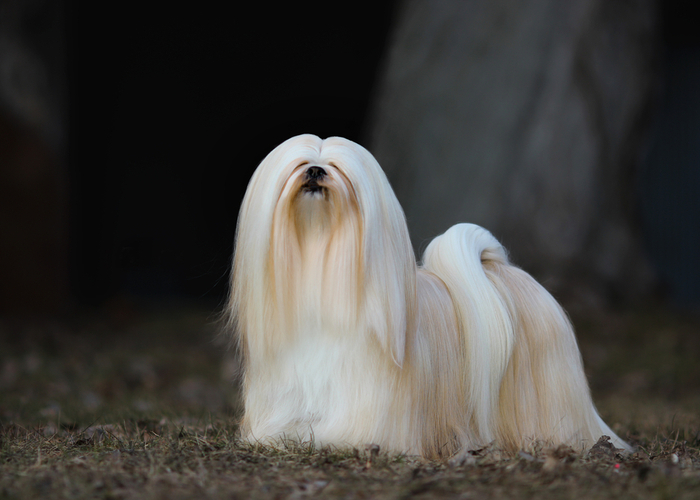 Looks can be deceiving for this Lhasa Apso breed. This fluffy and small dog is difficult to train and handle because of its stubbornness and independence.

A Lhasa Apso can be aggressive towards strangers approaching them and will be more likely to bite them even if that stranger is your friend. Enough reason why this dog breed belongs to the meanest dog breeds in the world. 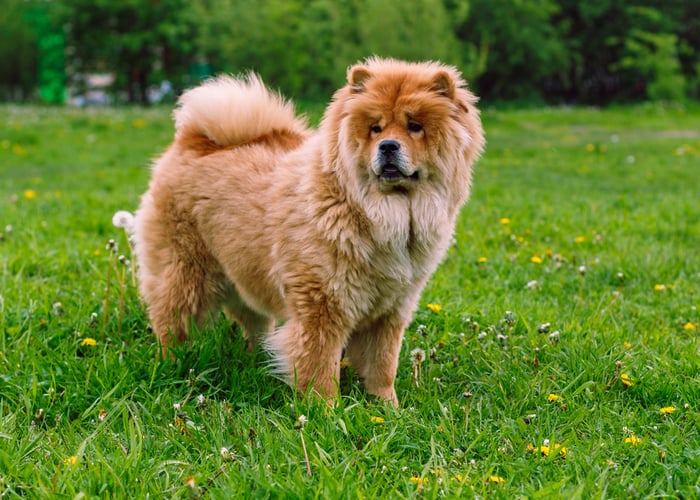 A Chow Chow is an East Asian dog that originated in China, most known for its bluish-black tongue and lion-like mane. Just like a lion, it has a biting force of 220 psi.

Chow Chows become aggressive due to a lack of socialization, training, and overprotectiveness of the owner. They are highly needy, which would result in a bad temperament.

Many states consider this breed unacceptable and require owners to have special insurance to cover any damage that this breed can cause.

If you're a first-time in adopting a pet, a Chow Chow is not a good idea for you. 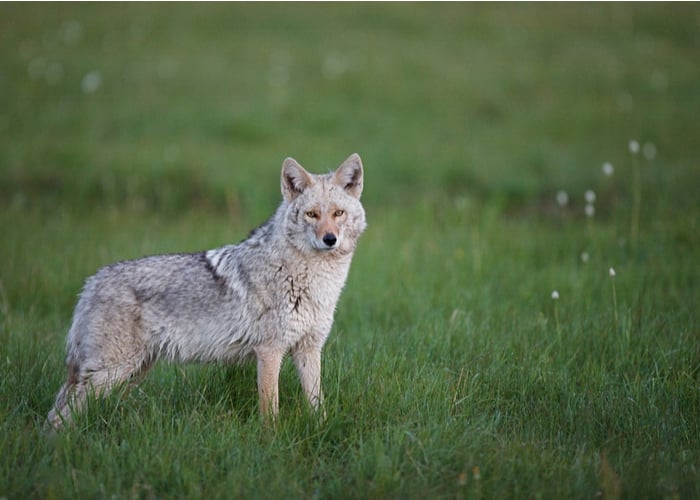 Wolf Hybrids are the cross match of a dog and a wolf. This dog breed is very unpredictable because of the genetic nature of wolves.

Some Wolf Hybrids get the traits of a dog, and some get the feature of a wolf.

Although there are Wolf Hybrids that are not aggressive, a high percentage of the population of this breed is dangerous and can attack humans and small animals.

A study listed 14 fatalities and 364 attacks coming from this dog breed.

The Wolf Hybrids that have a high tendency of restless and destructive behavior when not given regular exercise, training, and early socialization are:

Wolf Hybrids display their aggressiveness when they reach sexual maturity.

The most challenging part of owning this breed is you don't know whether or not this aggressive behavior will appear during maturity.

When classifying these dog breeds as one of the meanest dog breeds, do we mean the ones that more likely attacks people and other animals? Or those that cause more damage?

On the latter part, the built and the power of the dog's jaw matters. As far as the dog's temperament is concerned, many factors depend on the dog's environment and the owner that raised him.

If dogs have proper care and training from their owners, it can turn the most aggressive dog into a calm one. This change of personality is why the term “meanest dog breed” can be misleading.

It is crucial to keep in mind that you should give proper care and affection when owning a pet. Also, regular exercise is a must for any dog breed.

Regardless of their temperament, well-socialized dogs can be very loving and playful.