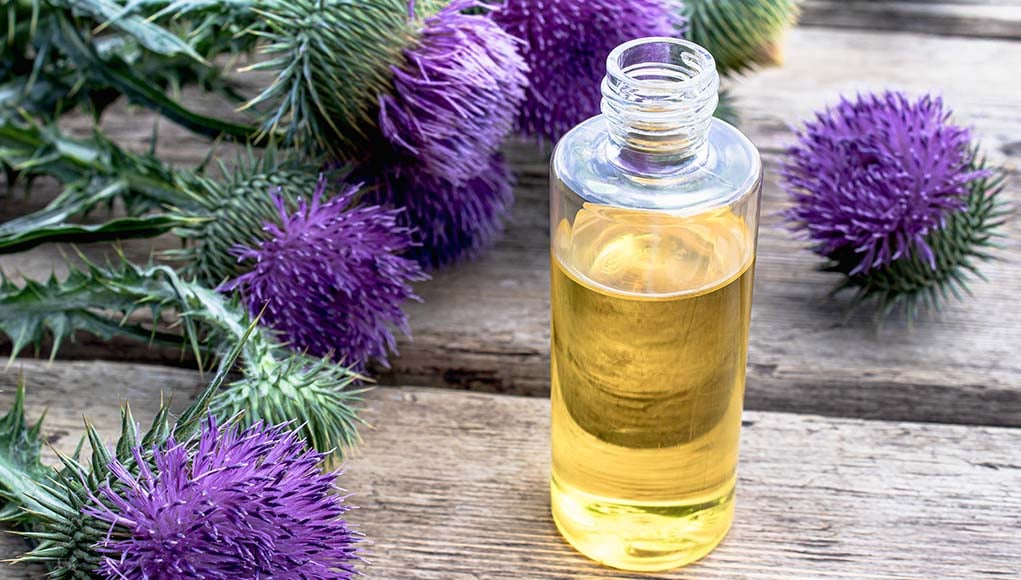 Milk thistle, otherwise known as Silybum marianum, is a prickly flowery plant from which the popular milk thistle supplements for humans are made. But today we are going to go over milk thistle for dogs and the potential uses and benefits could be.

Unlike many other “natural” remedies, milk thistle actually has quite a bit of science behind its benefits with humans, but not yet enough with dogs for vets to confidently recommend it (1).

These remedies are common in all-natural and homeopathic circles and are used both with humans and dogs.

What is Milk Thistle? 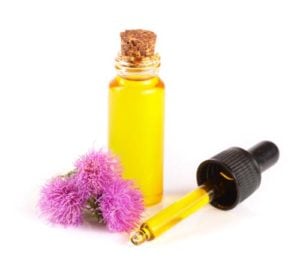 Milk thistle extract is derived from the seeds of the milk thistle plant.

In fact, the plant got its name from the milky sap that comes out of the leaves when they are broken as well as the splotchy white spots on the leaves.

The plant is native to Europe but can also be found in Canada, the United States, South America, and the Middle East.

It's been used for medicinal purposes for over 2,000 years. Milk thistle was found to be safe for consumption by both humans and dogs (2, 3).

However, because it is an herb, there are no regulations or standard dosing practices.

The active ingredient in milk thistle is called silymarin, which constitutes about 65-80% of the milk thistle extract (4).

Milk Thistle for Dogs and Its Known Uses

Milk thistle is currently tested to be used to help with liver disease in dogs primarily.

In addition, it may sometimes be recommended by some vets to support a dog’s immune system, as an aid in the recovery of several other ailments, as an anti-inflammatory, good source of antioxidants, for treatment of insulin-resistant diabetes, and “detoxifying” the body.

Most of these uses of milk thistle for dogs are based on what has been observed in human trials and not those with canines (1, 4).

A list of ailments that may potentially be helped through the use of milk thistle:

Milk thistle can be easily administered to a dog in the form of a tablet or through liquid drops. Many dog supplement brands offer milk thistle in a pill form that tastes like a dog treat for easy administration.

When used in liquid form, drops can be dissolved in your dog’s water or dropped directly onto their food.

It is a relatively inexpensive, all-natural herb that can be purchased online or in stores without a prescription.

Over the past several years, the use of milk thistle has become more accepted in the veterinary community as they saw its benefits with people.

See below to understand how milk thistle for dogs is used to potentially help with the above ailments. 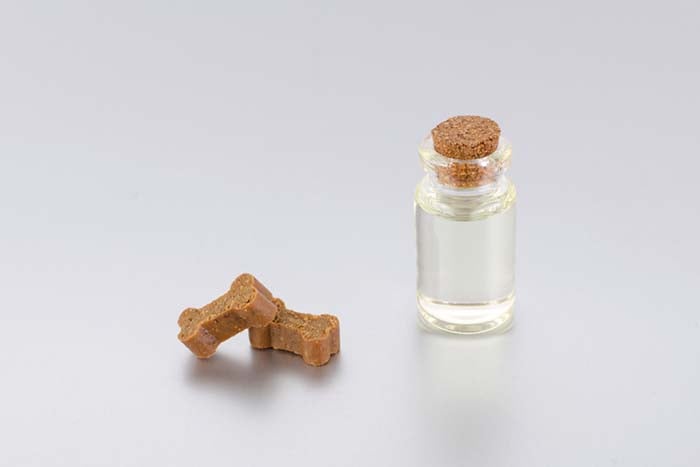 Studies found milk thistle to be safe for both humans and dogs, but when it comes to its proven benefits, there's still not enough scientific evidence with dogs.

Milk thistle helps patients with liver disease. When used as a complementary therapy supplement, it can repair liver damage through regenerating the liver (5). It also detoxifies the liver and then protects it from toxins.

It is believed that because of its anti-inflammatory properties and the benefit of repairing the liver, milk thistle may also benefit dogs with inflammatory bowel disease (IBD) too.

Milk thistle may be used as a natural way to help manage diabetes in dogs.

In human trials, one study found that it works similar to many chemical medications for diabetes as it decreases blood sugar and improves insulin sensitivity, so it may work with dogs who are insulin resistant diabetics by reducing resistance a dog has to insulin (7, 8).

The supplement also helps repair kidney damage as a result of diabetes and generally assists with kidney function (7).

Some veterinarians that are open to the use of natural supplements suggest using milk thistle along with (not instead of) medicinal treatment to help dogs with cancer, and there's some research behind its uses in such cases.

For example, milk thistle was found to decrease blood flow to tumors and slow down the growth of cancerous cells (9, 10, 11).

Studies with mice discovered that it protects internal organs during radiation and/or chemotherapy treatments and reduces other side effects from these treatments (12, 13).

It is important to note that milk thistle is not suggested to be a replacement for radiation or chemotherapy treatments.

Some mushrooms can be toxic to dogs if ingested. The death cap mushroom, for example, is as deadly to dogs as it is to humans because it contains a toxin known as amatoxin.

Studies found that one of the main chemicals in milk thistle, silibinin, is effective at treating mushroom poisoning (14, 15).

Dementia. Scientists found that compounds in milk thistle provide protection to the brain, and it can serve as a neuroprotective substance to help with brain function decline and conditions like dementia (16, 17, 18).

Allergies. Antioxidants and the anti-inflammatory properties of milk thistle for dogs may potentially help decrease their seasonal allergies and accompanying symptoms.

Side Effects of Giving Milk Thistle to Dogs

Milk thistle has been extensively studied in humans and has very few known side effects.

However, when it comes to dogs, while it was found to be safe to use it with canines, there's not enough research to claim we know of all potential side effects of milk thistle for dogs.

In anecdotal evidence and claims from veterinarians and pet owners, most dogs tolerate the herb well.

The most common side effects noted have been gastrointestinal distress, mild digestive upsets, and loose stools.

Most dogs do not experience these side effects when the recommended dosage is followed, and if they do, the side effects do not last very long.

As a dog adjusts to the ingestion of milk thistle, these symptoms are believed to reduce over time as the pet's body gets used to the herbs.

Milk thistle is not recommended for use in pregnant or nursing dogs.

While a prescription is not needed to purchase milk thistle, it is recommended for you to speak to your veterinarian prior to administering milk thistle to dogs so that a proper dosage can be established.

As a guideline (which is often included on milk thistle for dogs supplements), pets should be given ¼ of a teaspoon for every 20 pounds of their weight.

For example, one teaspoon should be given to a dog weighing 80 pounds.

There are several brands of milk thistle for dogs supplements that vets and pet owners found to be effective and not produce any side effects.

However, because there are no regulations for such nutraceuticals, it's highly recommended that you discuss this with your veterinarian prior to purchasing.

Milk Thistle For Dogs: In Summary

Milk thistle is an herb that is derived from the seeds of the milk thistle plant. There's not enough evidence to make confident claims about milk thistle for dogs.

It has many uses, and human trials found that it can be beneficial in treating liver disease, kidney disease, cancer, mushroom poisoning, allergies, diabetes, and more.

The extract has anti-inflammatory properties and is a great antioxidant.

However, milk thistle for nursing dogs is not recommended long term, nor in pregnant dogs.

There have been very few observed side effects of milk thistle, but those that may happen to include gastrointestinal distress, mild digestive upset, and loose stools.

Milk thistle can be purchased without a prescription, but it's strongly advised to consult your veterinarian for dosage suggestions.

It can be administered to your pet through tablet form or through liquid drops. 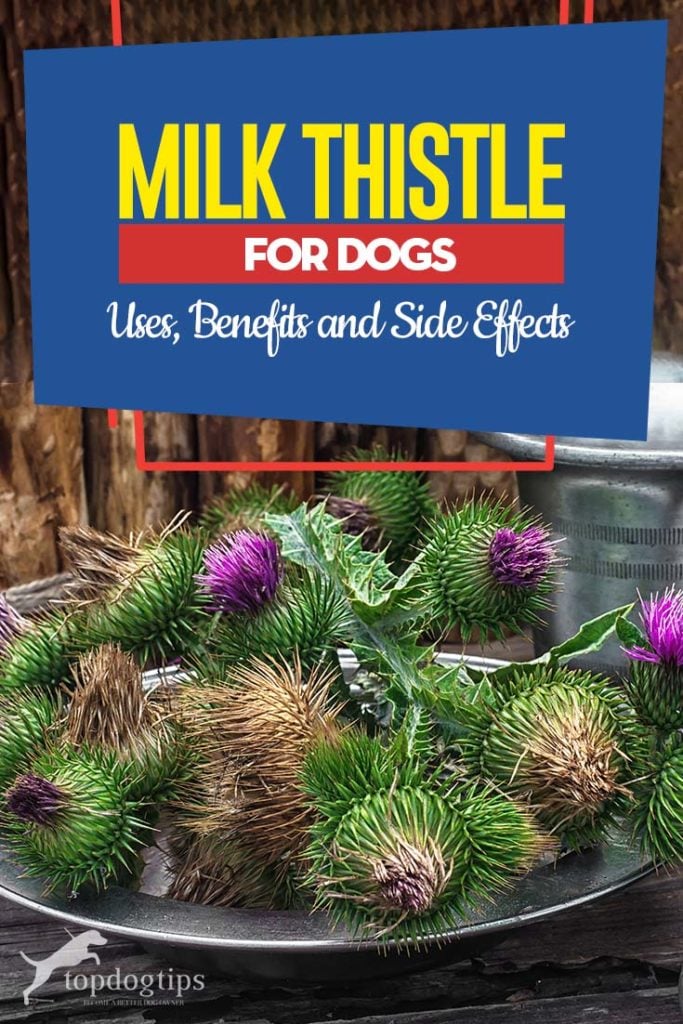