You've adopted a dog and it's now time to name your pup. If you're looking for cool dog names, we've got a huge list down below.

But did you know that there's science to naming the dog, and ways to figure out what type of dog name fits your puppy?

Here's what you must know about naming a dog and a list of cool dog names you can use for your new pet.

Cool Dog Names and The Science Behind Picking The Right One 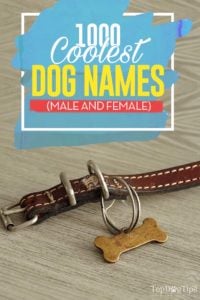 Dog owners will not only want to find and pick cool dog names but they wish for their pups to respond to them, and for those cool dog names to feel appropriate and fit well the characteristics and temperament of the dog.

So is there a way to name your dog more “effectively”?

Turns out that there is, and it's even supported with scientific research.

There's been a 2012 study with scientists studying dogs' understanding of commands and how this can be fit within the “dog naming” framework.

Paired with the 2004 study of dogs' ability to learn words, this provides a better understanding of how our pets perceive their names.

What the researchers of those studies found was that dogs respond to “s” sounds more acutely. On top of that, dogs also had a better response to two-syllable words with hard consonants.

It's because these sounds create more energetic frequencies which attracts the dog's attention, and these hard sounds activate more receptors in dogs' ears.

Researchers have concluded that when looking for cool dog names that will be most effective, using these two rules will provide better results.

A canine behavior expert Laura Waddell further explained in a New York Times interview that picking cool dog names should not determined only by what sounds good to the owner but how well the dog will respond to that name.

She also said that sibilant sounds will likely result in a much poorer response from canines than dog names with hard consonants and sharp sounds.

Laura also confirmed that sticking with two syllable cool dog names will work better than three or more syllable names, which are more difficult for dogs to remember and recognize.

Another thing to consider for choosing cool dog names is to not pick a sound that's similar to anything used in everyday speech.

This is because unintentional overuse of your dog's name (or words that sound similar to your dog's name) will make your pup less likely to respond to his or her name in the future, according to Stanley Coren, PhD.

Finally, a canine scientist Alexandra Horowitz, PhD makes an important note on choosing cool dog names for your pup – pick something that you yourself will be comfortable to say repeatedly and you won't feel the need to shorten it, or change it into a nickname, she told to New York Times.

This goes well with other tips on choosing a dog name: least complicated, two syllables, hard sounds and unique.

Now that you know what makes the best dog name for your pup, here are a thousand cool dog names to choose from for your male dogs and female dogs:

READ NEXT: How to Choose a Name for Your Puppy