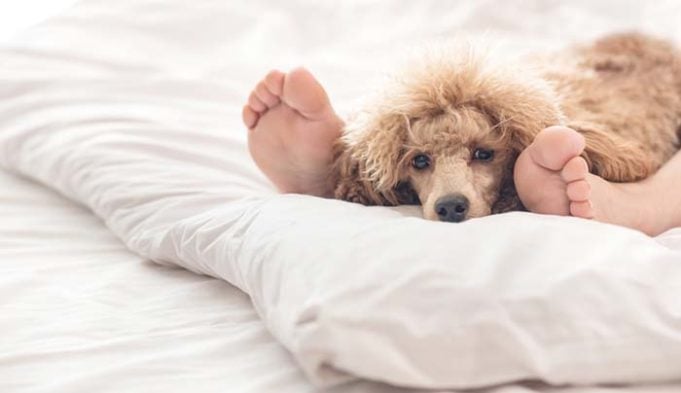 New study says that sleeping with your pooch will not disrupt yours or your dog's sleep.

How often do you share a bed with your dog? Me personally, I can't imagine not sharing a bed with my pooch. At one point in my life, when I lived with two dogs, three cats and a guinea pig there was hardly any space in my own bed for me among the whole menagerie.

Previously, we've been told that sleeping with your dog in the same bed is unhealthy and not recommended. In fact, there were even studies explaining how allowing your dog to sleep in your bed will disrupt your own sleep and make you feel tired. Of course, many owners including myself continued to ignore this. There was even a study back in 2015 that shows how about 50% of pet owners not only allow their dogs and cats to sleep in their bed, but also find that it improves their own sleep.

“I have trouble settling down, and he’s got very rhythmic breathing. It’s almost like white noise. And he’s really warm.”

When people come over to visit me, they're always surprised that I let my pooches sleep with me. They say that the bed, or even the bedroom, is off limits for their dogs. They've told me it's unhealthy, it encourages bad behavior and it even interferes with your sleep!

That's understandable. Everyone has boundaries. But if your dog wants to sleep with you and someone's trying to discourage you, you don't have to succumb anymore, because this new research has discovered that it's actually healthy for your dogs to sleep with you!

Scientists from the Mayo Clinic recently released the results of their new study showing the sleeping cycles of 40 dogs and their owners. The research demonstrated that both the dogs' and the humans' sleeping cycle was unaffected by whether the canine companions shared the bed with their humans. Both test groups recorded a “satisfactory” sleep efficiency, and while the study showed that sleeping alone has a very slightly better efficiency, the difference was insignificant.

Now, don't be fooled by the results to think that your dog will just want to sleep with you straightaway. My old dog Cow absolutely hated sharing a bed or a sofa with anyone because he was so jumpy. It was mainly because of his arthritis, but the slightest movement would stir him from his sleep and – seeing that he was quite a big dog – he would run off while running you over and possibly bruising you.

Why do some dogs prefer to sleep with their owners? 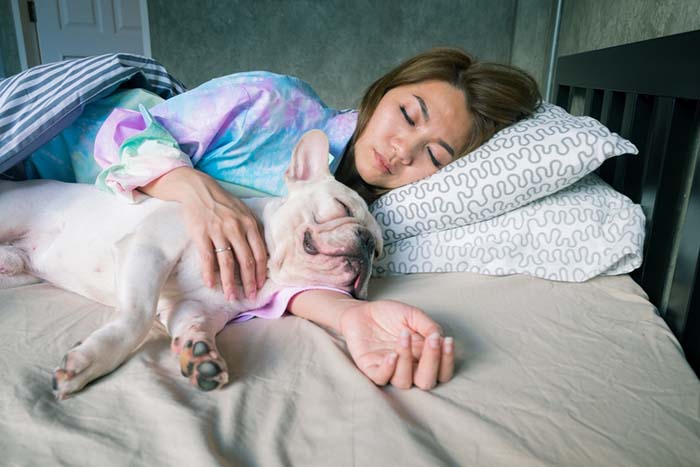 Dogs love feeling safe when they sleep. More than anything, they don't want to be bothered. Also, you have to remember that all dogs have their own personalities. Some find comfort in sleeping next to their owner and cuddling up with you, while others prefer to have more personal space. A lot of this can be gathered from how your dog sleeps, in what places and what sleeping positions. So, don't take it personally, just work with them and see what happens.

Veterinarians also say that where your dog choose to sleep depends on the dog's temperament. Vets also don't seem to have any problem with owners letting their pets sleep in the bed with them, as Dr. Carlo Siracusa from Philadelphia's Penn Vet explains in the New York Times article:

“There are dogs that tend to be more reactive to stimuli. So, for example, if the dog is on the bed and the owner turns and inadvertently hits the dog with the leg, some dogs will get startled and react out of fear. If there are no problems and the owner is happy with letting the pet in the bedroom, or on the bed, it’s fine with me.”

I'd say that if you've had the dog since they've been a puppy, they're more likely to share a bed with you if you teach them to do that early on. Most of my older rescues have been too anxious, possibly from past bad experiences.

Myself, I own a chihuahua and a bulldog. The chihuahua is only slightly smaller than a normal-sized cat. The bulldog is a whopping 58 lbs. We're really a sight to behold when we go out for walks, especially since the little guy is constantly bullying the big boy like a sugar-addicted hyperactive toddler (despite being older).

When I go to bed at night, they only ever sleep with me. They have kennels, they have a great outdoor space they can use, they have all the sofas and armchairs in the world, but they still choose the comfort of my own bed while sometimes trying to claim it all for themselves.

But it's never something to force onto your dog; even if your pooch doesn't want to sleep in the same bed as you, they can still give you plenty of love during different parts of the day. And if you do want to have them as a bed buddy, then you can breathe easy – you'll be sleeping just as efficiently as you would alone, no matter what others tell you.

READ NEXT: Why and How Much Do Dogs Sleep?