Georgia Pike is a visually impaired student who goes to the University of Victoria. She is assisted by Grainger, a service dog who she relies on and trusts. But not everyone seems to believe that Pike’s pup is legitimate. And she is sick and tired of being repeatedly asked to prove that he is.

The fourth-year student often has people come up to her and ask if Grainger is, in fact, a service dog. Of course, she always states that he is – and then they don’t believe her and ask to see identification.

For Pike, this is something that happens almost every day. In fact, while in a shopping mall recently, she was stopped by multiple security guards several times throughout her trip. When attempting to board a ferry once, her ID was asked for three times – because apparently, seeing it once as proof isn’t enough.

According to the student, this whole process occurs so often that it has proved to be debilitating for her. She has even decided against tagging along on trips with her friends because of it. She feels safe being guided by Grainger, but strangers and others around her interrupt the dog’s work. 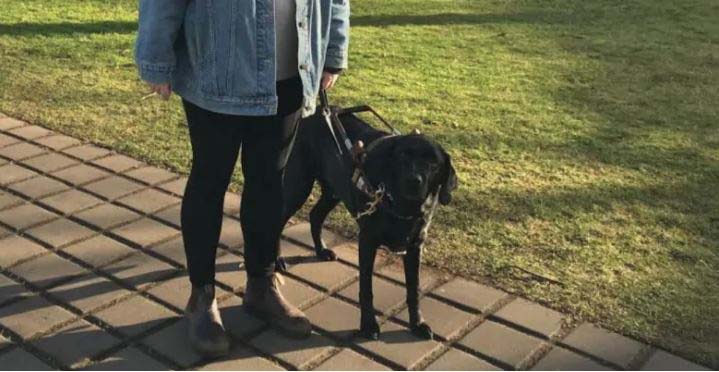 Pike’s wallet is full of a total of six of them. Four of these IDs indicate that she truly is visually impaired. Two others are for her pup, one from the training school he graduated from, and one from the government. But being asked to prove herself day in and day out is part of a more complex problem. Pike says that people with disabilities of all kinds are constantly trying to prove that they deserve access to the same public spaces as everyone else, often to random strangers.

Unfortunately, according to The B.C. and Alberta Guide Dogs CEO, William Thornton, this is a very common situation for the disabled. Some are denied entrance to businesses, and focus is so heavy on the possibility of fake service dogs than understanding real ones.

Pike believes that better education is key in solving this issue. She adds that it is typically easy to determine whether a dog is truly a service dog at work – they are quiet and well-behaved, and often constantly communicated with through hand signs by their people. She states that businesses could be trained to better understand how a service dog acts and behaves, saving her, and many others like her, the grief.

READ NEXT: Uber Refuses to Drive Woman Because of Her Guide Dog