We've all heard the warnings about dogs eating chocolate.

Is it really toxic to dogs?

Why is it so dangerous?

And, probably the most critical question, what to do if your dog eats chocolate?

I'll answer all of these questions in this quick guide.

Chocolate is made from the roasted seeds of cocoa plants.

It contains a chemical called theobromine.

This makes chocolate dangerous to dogs because they do not metabolize theobromine as humans do.

This means theobromine IS toxic and fatal at high doses.

We've all heard those stories about how your friend's dog ate sooo much chocolate, and nothing happened.

These are very fortunate owners, and I would heed they make sure it doesn't happen again.

Just because it doesn't seem to visibly affect their dog doesn't mean it didn't hurt their organs and other systems.

Too much chocolate will harm a dog's cardiovascular and nervous systems, among other things.

If your dog only ingests a small amount of chocolate, it will likely pass through his system with no issues.

However, you should keep an eye out for signs of chocolate poisoning in dogs, such as:

Call your veterinarian or pet poison hotline if you believe your dog has eaten chocolate.

The professional may advise you to make the dog throw up and will help you decide whether a trip for medical care is warranted or not.

What to Do if Your Dog Eats Chocolate 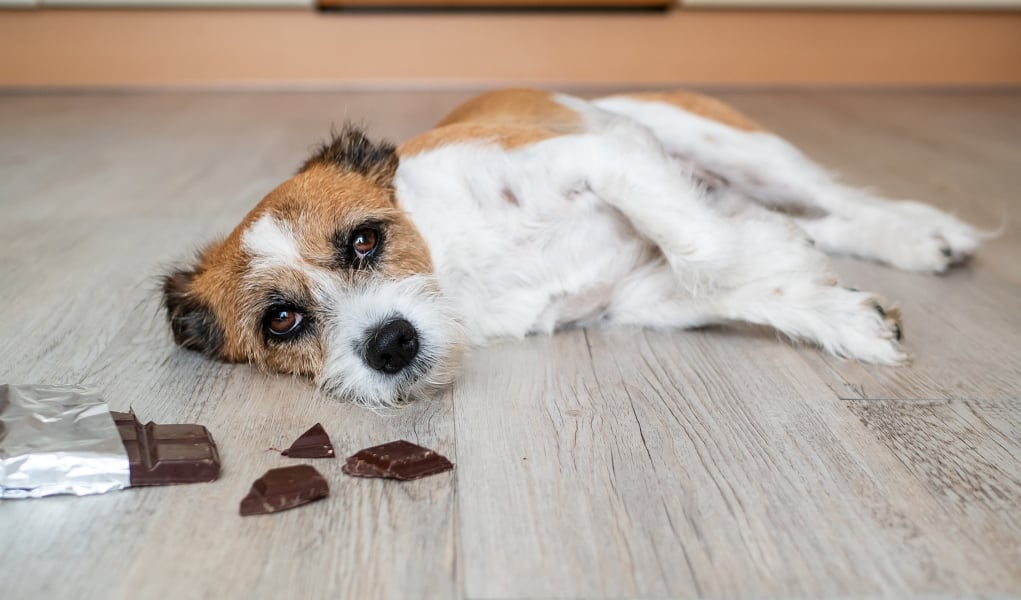 A good rule of thumb is that the darker and more bitter the chocolate is, the more dangerous it will be for the dog.

White chocolate is not toxic to dogs because it does not contain cocoa.

Dark chocolate and baker's chocolate are the worst because they contain more theobromine.

Ideally, learning what to do if a dog eats chocolate is crucial before you need this information.

You won't have the time to do the research in the event of a pet poisoning emergency.

If your dog eats chocolate, the first thing you need to do is contact your veterinarian.

They will likely tell you to make the dog vomit to get the chocolate out of his digestive system.

You can use 3% hydrogen peroxide to induce vomiting in dogs.

How much: The proper dosage of 3% hydrogen peroxide for a dog to make them throw up is one teaspoon for every 5 pounds of a dog's body weight.

However, 3 tablespoons of hydrogen peroxide should be the maximum amount, no matter how much your dog weighs. More than that can be fatal to dogs. 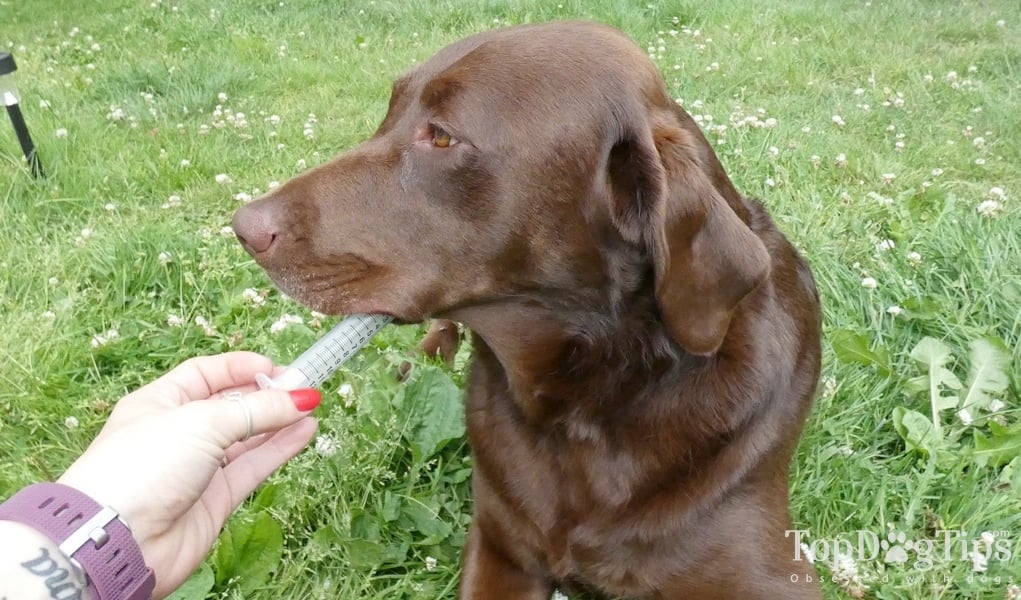 To make your dog throw up, you have to squirt the hydrogen peroxide into the dog's mouth and make sure he swallows it.

The easiest way is to use a syringe to squirt the peroxide into the back of a dog's throat.

In most cases, he will instinctively swallow the liquid.

But if your dog weighs more than 45 pounds, you should only give him three tablespoons of hydrogen peroxide maximum.

Giving more than this amount at once could make your pet's stomach rupture, so you must follow these dosage instructions.

Allow the Dog to Vomit

After you've given the dose of peroxide, your pet should vomit within 2-5 minutes.

You can re-dose if the dog doesn't throw up, but only once.

Again, do NOT give your dog more than 2 doses of hydrogen peroxide because that can be fatal.

If your pet doesn't throw up after two doses of hydrogen peroxide, you must seek veterinary help immediately.

Do not take any chances.

By this time, your pup will be uncomfortable, and the chocolate will work through his digestive tract.

READ NEXT: 7 Hidden Toxins In Your House That Are Poisonous or Cancerous To Dogs