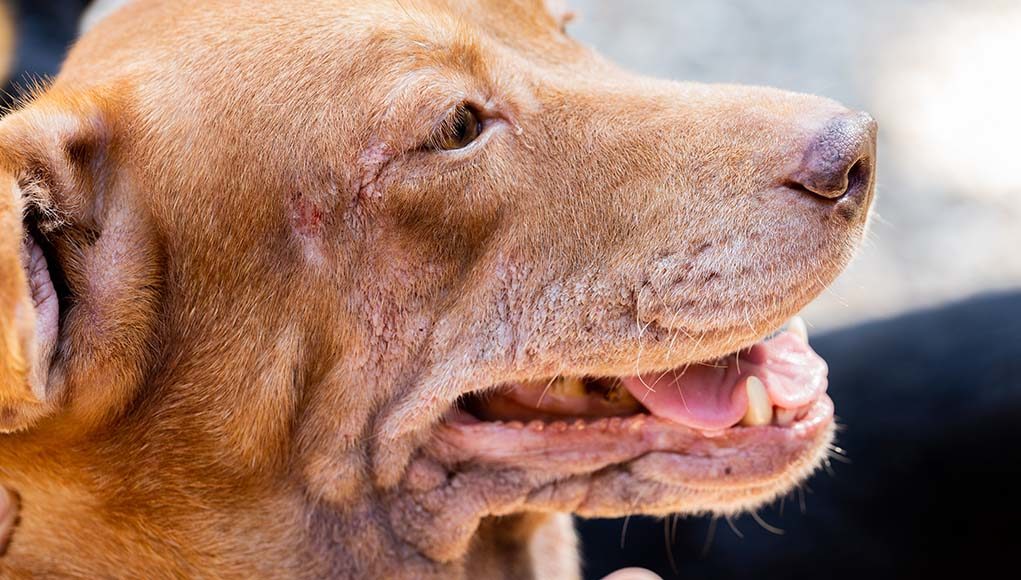 What is an Autoimmune Disease in Dogs?

Different autoimmune diseases differ in the symptoms that they present and the impact that they have on a dog's body, but they all share one thing in common – the immune system has turned against the body (1).

The immune system exists to keep a dog healthy and to attack foreign substances that invade the dog's body and make them sick (for example, bacteria or virus). In a dog with autoimmune disease, their immune system mistakes part of the body for a foreign invader and begins to attack it. The area of the dog's body that is attacked depends on the type of autoimmune disease and some diseases can target multiple areas of the body.

Think of autoimmune diseases as a programming error in your dog's body that causes it to misidentify healthy cells as unhealthy cells and destroy them, thereby self-destroying itself (2). 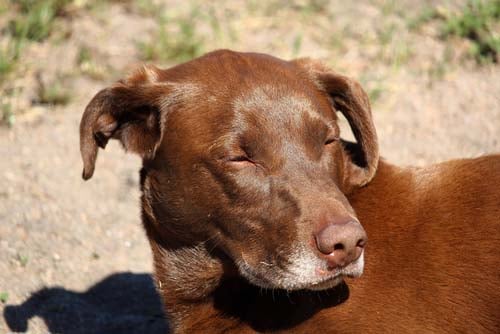 Hypothyroidism in dogs refers to a condition when their thyroid is not producing enough hormones (3). This can happen due to damage to the dog's thyroid, disease of the thyroid, or birth defects.

The most common symptoms seen in canine hypothyroidism include (4, 5):

Hypothyroidism in dogs is diagnosed through blood testing and a diagnostic exam.

Treatment for dog hypothyroidism is prescription thyroid hormone replacement (6). Medication may periodically need adjusting and will be required for the rest of a dog's life. 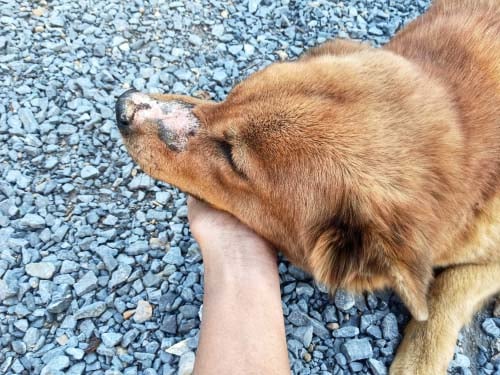 There are two varieties of lupus in dogs: SLE and DLE. The latter is more common and less severe, whereas the former is much more rare but can be fatal (7).

SLE (Systemic Lupus Erythematosus) is a rare form of lupus and much more severe. In dogs with SLE, their body’s immune system attacks the skin, blood, nervous system, and major organs (8). SLE can be fatal to dogs.

Symptoms of SLE in dogs vary widely, depending on which part of the body is being targeted. Symptoms of canine SLE regularly mimic other diseases which can make it difficult to diagnose (9).

The most frequently seen symptoms of dog SLE include:

A diagnosis of SLE is a process of eliminating other diseases with similar symptoms, a physical exam, and a blood test for antinuclear antibodies.

Treatment for SLE in dogs depends on what part of the dog's body is affected. There is no cure for SLE, so any treatment is targeted at reducing symptoms and suppressing the immune system with steroids. In severe cases, chemotherapy may be considered to suppress the immune system and reduce pain for dogs.

DLE (Discoid Lupus Erythematosus) is the more common form of lupus in dogs and it only affects the animal's skin (10).

Symptoms of canine DLE include:

A diagnosis of DLE requires a physical exam as well as a skin biopsy of the problem area. This biopsy will help the vet to rule out other conditions that cause similar symptoms and to confirm DLE in your dog (11).

Treatment of DLE in dogs is focused on healing the affected area and suppressing the immune system with steroids. If an infection develops from sores, antibiotics may be necessary (12). Your vet may also recommend skin supplements like vitamin E.

It’s important to keep DLE dogs away from UV light as this can cause flares of DLE and worsen existing symptoms. 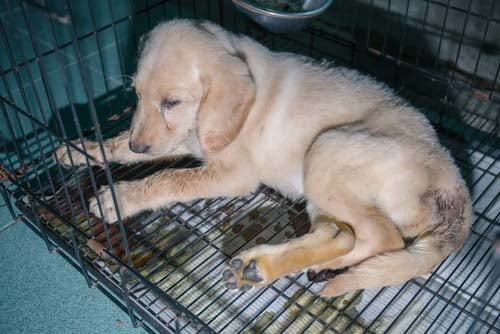 Inflammatory bowel disease in dogs occurs when the animal's immune system overreacts to the bacteria in the intestines. This causes inflammation and causes gastrointestinal symptoms (13).

IBD in dogs is most commonly seen when they reach middle age.

Symptoms seen in dogs with inflammatory bowel disease include:

To diagnose IBD in a dog, the vet will take a thorough history of your dog’s symptoms and complete a physical exam. Routine tests include taking blood and a urinalysis to rule out other causes of symptoms. A fecal exam is done to check for parasites. Veterinarian may also request an ultrasound or barium x-ray to check for changes in the dog's intestinal wall. Rarely, a sample of the intestinal tissue may be biopsied (14).

There is no cure for IBD in dogs so treatment targets symptom relief. Antibiotics may be given along with steroids to suppress the immune system. If your pet is dehydrated, fluid and electrolyte replacement may also be necessary. Your vet may also supplement with vitamin B12. You will also need to make changes to the dog’s diet so it is easier on your dog’s digestive system (15). 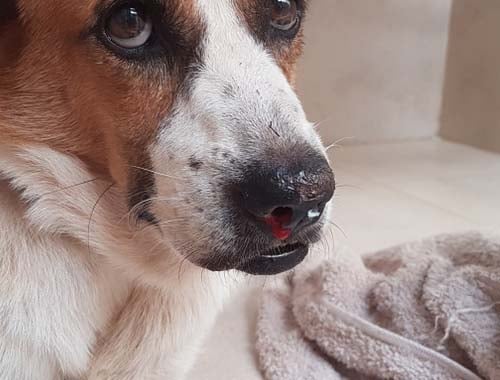 Immune-Mediated Thrombocytopenia in dogs is caused when the immune system attacks the platelets. IMT can be a primary disease or it can be a secondary disease (16).

As a secondary disease, dog IMT is caused when the immune system accidentally destroys platelets while fighting another condition like infection or cancer.

Canine IMT is more frequently seen in female dogs than in males.

Symptoms seen in IMT in dogs include:

Dogs with IMT may experience just one episode of IMT signs, but other dogs may suffer a relapse as a result of other health conditions or stressful situations (17).

The increased bleeding associated with IMT will point your vet towards IMT and a complete blood panel will confirm the diagnosis with a low platelet count.

Treatment of IMT in dogs requires steroids to slow down the destruction of platelets. Depending on how much blood has been lost and the results of a CBC, a platelet-rich plasma transfusion may be necessary (18). 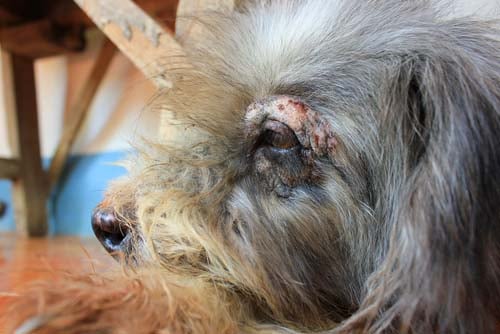 Pemphigus in dogs occurs when the animal's autoimmune system attacks the connections between skin cells; it is the most common autoimmune disease in dogs (19).

Pemphigus may be “endogenous”, “exogenous”, or “idiopathic”.

Endogenous pemphigus occurs as a result of something within a dog’s body. For example, the immune system “miswiring” as mentioned at the beginning of this article.

Exogenous pemphigus occurs when something outside of the dog’s body sets off the immune system and causes inflammation. This inflammation can then trigger pemphigus.

Idiopathic pemphigus occurs when there is no known cause for the immune attack on the dog's skin cell connections.

There are three varieties of pemphigus in dogs (20):

The most common symptoms seen in dog pemphigus include:

These symptoms are almost always located on the dog's face.

Pemphigus is diagnosed through a skin biopsy.

There is no cure for pemphigus but suppression of the immune system with steroids can control symptoms. Ongoing treatment may be necessary, but your vet will want to monitor for any symptoms of medication side effects (21). 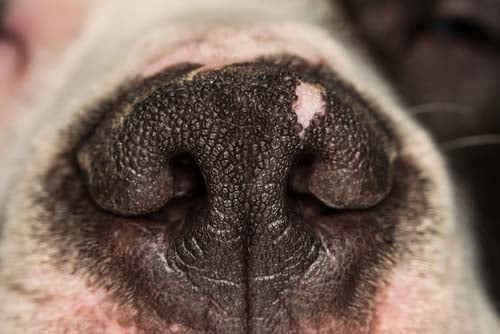 In most instances, Addison’s disease in dogs results from the immune system attacking the adrenal gland. It is also possible for Addison’s to be caused by other diseases and processes that damage the dog's adrenal glands (24).

The most common symptoms seen in canine Addison’s disease include:

Addison’s disease in dogs is diagnosed through blood work and a urinalysis, but most cases are not caught until a dog experiences severe and life-threatening symptoms.

Treatment for canine Addison’s disease requires immediate supportive care if a dog is in an Addisonian crisis. Once the crisis has been stabilized, lifelong steroid treatment for the dog is necessary because the damage to the adrenal glands cannot be repaired.

With a long-term steroid treatment, your veterinarian will also want to run regular blood work to check for side effects of the medication as well as to ensure that the steroid treatment is still working on the dog as it should. 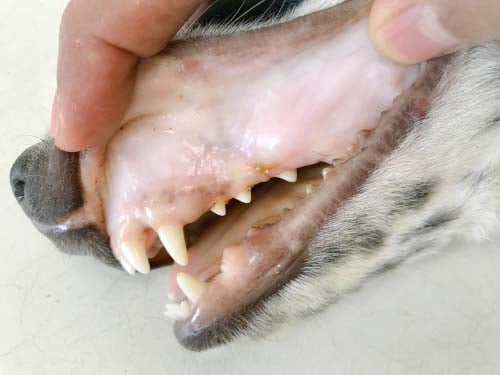 Immune-mediated hemolytic anemia in dogs is caused by the immune system attacking red blood cells. As red blood cells are destroyed, tissues and cells in the body are deprived of oxygen (25).

The most common symptoms seen in canine immune-mediated hemolytic anemia include:

Immune-mediated hemolytic anemia is diagnosed through a complete blood count. Testing will show a low percentage of red blood cells and those red blood cells that are in the sample will be misshapen and abnormally sized (26).

Treatment for IMHA in dogs is targeted at stabilizing symptoms (in some cases this requires a blood transfusion) and suppressing the immune system with steroids. Once the condition is stabilized, your vet will taper your dog off steroids to avoid side effects of the medication, but you will need to monitor for any signs of relapse. 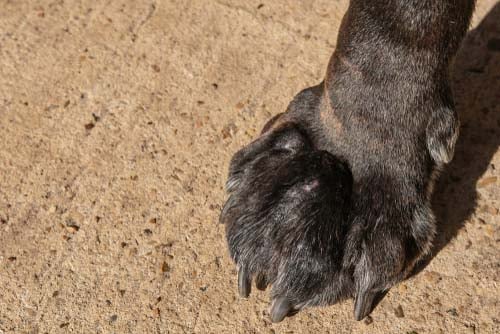 Immune-mediated polyarthritis in dogs is caused by the immune system attacking the joints and causing pain, swelling, and impacting your dog’s ability to walk. IMPA can be a standalone condition, but it can also be one symptom of widespread autoimmune disease (27, 28).

The most common symptoms seen in canine immune-mediated polyarthritis include:

Immune-mediated polyarthritis is diagnosed through a blood test and imaging of the joints. A joint tap to take a sample of joint fluid to check for any abnormalities. IMPA in dogs is diagnosed only when other possible causes of joint symptoms are ruled out (29).

Treatment for canine IMPA requires steroids to subdue the immune system. Depending on the severity of IMPA, lifelong treatment for your pet may be necessary, but for some dogs, steroids can be tapered off.

READ NEXT: 25 Dog Health Symptoms That You Must Address Right Away