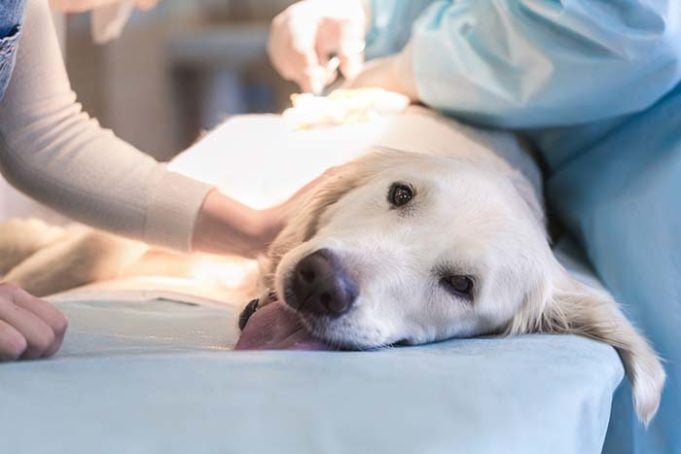 Scientists are attempting to vaccinate 800 dogs, and if this potentially universal cancer cure would work in dogs, it might also work in humans.

Researchers at the Arizona State University have been working for nearly a decade on a cancer cure for dogs. Stephen Johnston and his team developed a type of vaccine cocktail that would target potential tumor cells before it could morph, scatter and poison the body.

“No one else has proposed any other way you could possibly make a prophylactic vaccine. So, if we’re the only game in town, and there’s even a 10% chance it might work, we should try it.”

By July, three American universities will test the viability of this cancer drug, called the multivalent frameshift peptide (FSP), in 800 healthy dogs. It would be the largest clinical trial conducted for canines. The study will be undertaken for five years to determine if the cancer vaccine could actually prevent the disease before it happens.

Years ago, colleagues and oncologists told Johnston that a cure like this would be impossible because of the complexity of cells and genetics. Experts believe based on countless cancer studies that each cell is unique, so a universal drug that can prevent any type of cancer will not be effective.

Currently, two types of cancer medication for dogs are being sold in the market and it’s for specific cures. Oncept treats melanoma, while Provenge treats prostate cancer.

ALSO READ: 8 Cancer-Causing Dog Products (And How to Avoid Them)

Johnston acknowledges what his colleagues have told him but he said via American Veterinarian that no one has been conducting similar studies as his team. If there were a 10 percent chance that this universal vaccine works, then it would be a shot worth exploring. He has been testing the FSP on mice for the last 12 years. It showed promising results because cancer growth in its test subjects was either restricted or delayed.

But testing the vaccine in dogs would be a big leap since their genetic makeup, characteristics and environment aren't similar to mice. Dogs and humans, on the other hand, share at least 95 percent genetic similarities, including the prevalence of deaths due to the disease.

One in four dogs develops cancer, according to the Veterinary Cancer Society. The disease, on the other hand, is one of the leading causes of death in humans.

Veterinarian Douglas Thamm will lead the clinical trials with Johnston, which will be done at the Colorado State University, the University of California-Davis and the University of Wisconsin-Madison. Healthy dogs between six to 10 years old will be given the vaccine, provided that they do not have any other critical condition nor history of cancer.

Proponents of the Vaccine Against Canine Cancer (VACC) study has come out with the full guidelines and list for the trial.

Half of the dogs will be given the vaccine, while the other half will be on placebo. The dog owners won't know which group their dog belongs and as they continue to go about their normal routines, the researchers will visit the dogs twice a year for five years to determine if the vaccine is working against preventing cancer development.

Johnston’s previous study has determined that the vaccine doesn't carry any huge risks or untoward side effects.  If the dog, however, does develop cancer while the trial is ongoing then the research will help cover treatment costs.

If the vaccine proves to work then this research might also open the doors for the next step: a universal cancer drug for humans. A long road is ahead, however, as every study need funding and approvals from government agencies before the drug could reach the market.

Open Philanthropy Project is supporting this canine clinical trial with a $6.4 million grant awarded to Johnston last January. The head of the study said that he was turned down quite a few times when he sought funding because his vaccine invention went against conventional studies. His idea was just too out there.

Experts from VACC believe that while testing on animals might be a concern, this undertaking could have the support of doctors or experts knowing that the drug could be a potential cancer cure for humans, too.