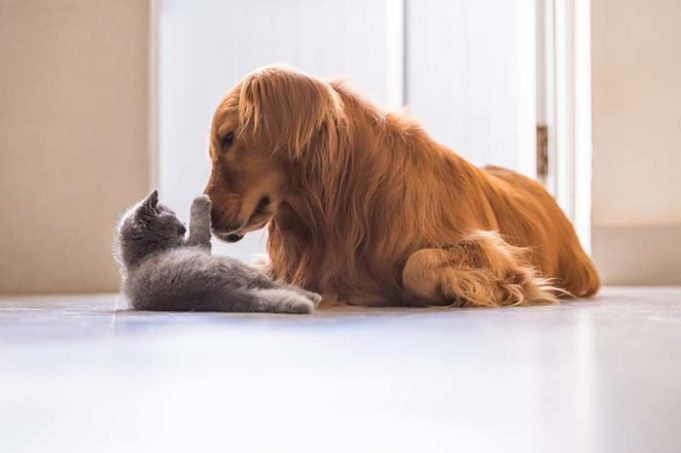 Researchers used cat-related sights, sounds, and smells to determine how cat-friendly dogs are, and discovered that dogs rely heavily on hearing.

Future dog adopters looking for the most cat-friendly dog breeds finally get a science-based method to ensure that the newly adopted pet will live in peace with their cats.

Yesterday, we've written about the new research that pointed out why some dogs think more independently than others, and how much the relationship between the household canines matter. One of the researchers from that team has also made another discovery, which will greatly benefit multi-pet households.

A study conducted by scientists at Canisius College examined dogs’ responses to various cat-related stimuli, and in the process they found out that dogs rely more heavily on their hearing than we previously guessed. The results were published in the Journal of Applied Animal Behaviour Science.

Christy Hoffman, PhD, is an assistant professor of animal behavior, ecology and conservation (ABEC) at Canisius. Hoffman and her team of researchers have conducted the study, which takes the first steps in identifying how to determine which dogs will be cat-friendly – without stressing any cats out.

Why the search for cat-friendly dog breeds

The study was inspired by an issue surrounding shelter dogs. When dogs are being looked at for adoption, one of the most common questions is, “Will this dog get along with cats?”

Currently, there are standardized assessments for determining whether dogs will get along with humans or other dogs, but none of those currently exist for determining a dog’s probable interaction with cats. The dog must actually interact with a cat for anyone to know how it will go.

This can oftentimes result in painful decisions being made to return a dog who the humans love but who doesn’t get along well with the feline members of that household.

This study sought to figure out what a cat-friendliness assessment might look like, so that dogs can be better placed in their new homes.

For this research, Hoffman and her team looked at the responses of 69 dogs of various breeds to various cat-related stimuli: a realistic stuffed cat, audio recordings of cat sounds, and the scent of feline urine.

There was no relationship found in this study between a dog’s history with cats and their reactions to the sights and smells of cats.

According to Hoffman, the team’s human tendencies led them to first test the dogs’ response to the visual stimulus, the doll. Unlike dogs, humans rely more on sight to survive than on any other sense.

Previous studies have revealed that dogs usually understand the world primarily through their sense of smell. But these new findings produced the surprising result that dogs rely more on their hearing for their understanding of an animal like cats.

What This Means for Dogs, Cats, and People

Most studies tend to focus on dogs’ visual responses to stimuli. But because this research indicates that their hearing may be quite significant to their responses, scientists may now start looking at alternative methods for determining a dog’s behavior.

Going forward, it may also be feasible for shelters to use cat sound recordings to figure out how cat-friendly a dog may be, and therefore whether that dog can get along in a household containing cats.

READ NEXT: 13 Best Dogs for Cats