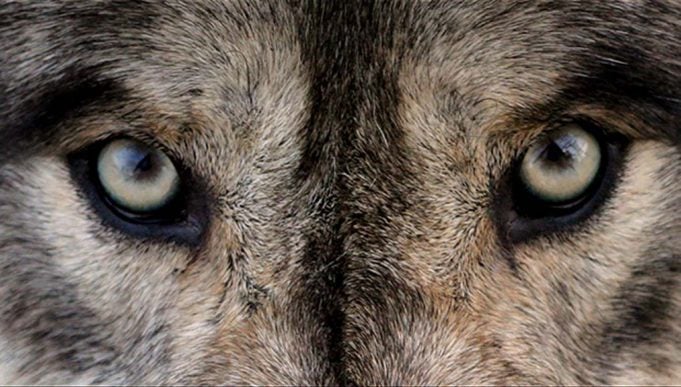 It’s common knowledge that all modern dogs including tiny ones like the Teacup Yorkie are descendants of wolves. It’s hard to imagine that our cuddly, furry best friends were once wild animals but that’s how evolution works. As studies show, wolves were domesticated around 130,000 years ago when they started following hunter-gatherers for scraps of food. The humans didn’t mind feeding docile wolves and this two-way relationship eventually led to dogs as we know them today. It’s safe to say that they mastered the “puppy eyes” to win our hearts!

While we’d all love to have a dire wolf as a pet thanks to the Game of Thrones, the reality is that we have to settle for dogs that look like wolves instead. The good news is that these breeds are just as majestic as their wilder counterparts. Take a look. 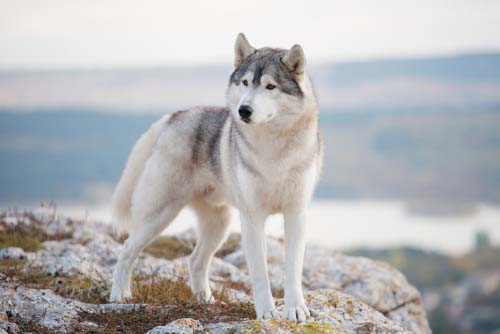 When you think of dogs that look like wolves, a Siberian Husky is sure to pop into your head. With their furry coat, triangular ears, striking eyes, and distinctive wolf-like markings, Siberian Huskies may seem intimidating at first but the truth is they’re among the friendliest dogs out there!

Siberian Huskies were originally bred to haul heavy loads by the Chukchi Tribe in Siberia. Today, these loyal and intelligent dogs have become a family favorite worldwide. They are extremely vocal, will often howl like their ancestors (as seen on YouTube), and keep you entertained with their goofy antics. They are great with children and love being part of a pack but their high energy levels mean they need plenty of exercise to keep them from getting destructive. Siberian Huskies love having a job to do and are a perfect fit for active and athletic families. 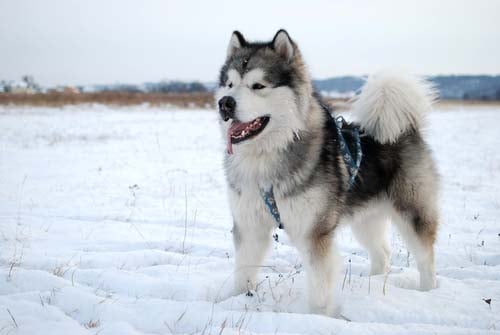 If you thought Siberian Huskies were big dogs, you clearly haven’t come across the Alaskan Malamute! Bigger, fluffier, and stronger, these dogs were bred to pull sleds over long distances. They can get pretty big (think 75 to 85 pounds!) and are working dogs with playful personalities and a high level of intelligence.

Like Huskies, Alaskan Malamutes are also vocal, well trainable, and have tons of energy that needs to be burned off. When not doing sled work, they love running, hiking, and exploring on their own. Unfortunately, they’re not a great fit for families with small pets as they could get into prey mode. With their double coat and facial markings like a wolf, cuddling up with them is as close to cuddling a wolf as you will get. However, having them as a pet also means your home is going to be covered in fur. One look at that gorgeous face, though, and it’s all worth it! 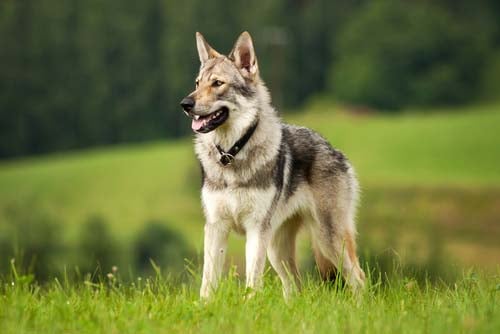 Kugshas, also known as Amerindian Malamutes, are native to the United States. Not much is known about the history of these beautiful dogs other than the fact that they are true wolf-dog hybrids. That explains why they look strikingly similar to real wolves. Like their distant cousin the Husky, Kugshas also have plenty of energy and stamina and are incredibly independent and assertive.

Kugshas were only domesticated recently so don’t be surprised by their feisty and stubborn spirit. They are loyal and form a close bond with their owners but aren’t the best pets for families with little children and smaller pets. Like the other dogs on this list, Kugshas also need plenty of physical activity without which they will find not-so-fun ways to burn off their excess energy. Don’t say we didn’t warn you! 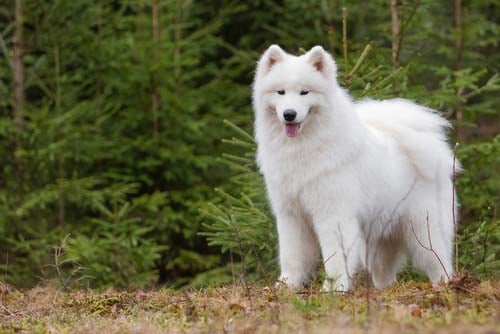 Fluffy white fur that makes them look like a cloud and a smile that will melt the coldest of hearts – that’s a Samoyed for you. Probably the cutest wolf-like breed on this list, Samoyeds get their name from the Samoyedic people of Siberia who bred them to help with hunting and to keep them warm at night. That’s probably where they get their love of humans from. For more in depth info about their origin and history.

Samoyeds are super friendly and love life! They may not be the best guard dogs but they are highly intelligent and perfect for families with kids. Expect tons of cuddles, shedding, playtime, kisses, talking, and the hard-to-resist “Sammie smile”. 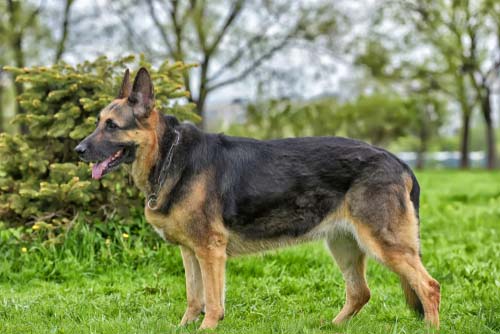 German Shepherds are one of the most popular dog breeds in the world and with good reason. These handsome fellas are intelligent (ranked third most), loyal, and great at mastering any challenge thrown at them!

Energetic and eager to please, German Shepherds can be trained easily and that’s why they make excellent working dogs. It's also important to note that since German Shepherds are considered as athletic/working dogs, they require a special diet comparative to other breeds. They are extremely loyal and need a family that can spend a lot of time with them. One thing is for sure – a German Shepherd will consider you his best friend for life! 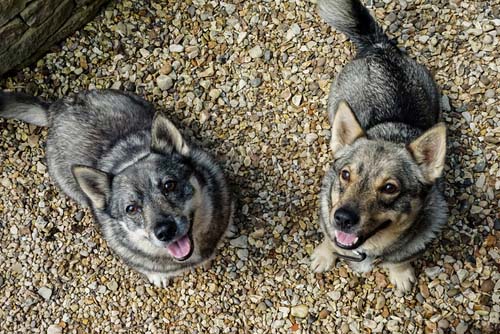 If you’ve ever wondered what the lovechild of a Corgi and a wolf would look like – this is it. It’s hard to imagine the adorable Swedish Vallhund as a member of the wolf family but its distinctly lupine features tell a different story.

This “mini wolf” is the shortest on the list at just 14 inches tall (Aww!) and is believed to date back more than 1000 years to the time of the Vikings. Just like the Corgi, the Swedish Vallhund is also a herding dog. When they’re not busy nipping the ankles of cattle, they love to run around and play. They adore talking, are easy to train, and are quite a lovely addition to active families. A Viking and a wolf – now that’s pretty cool! 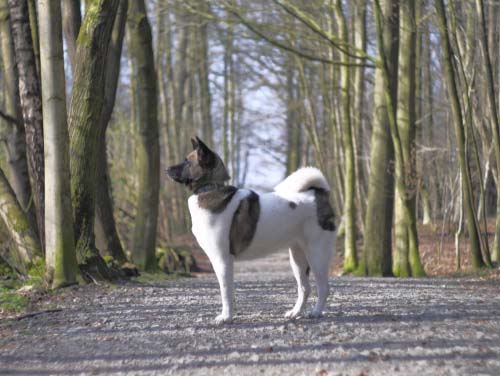 Who hasn’t heard the heart-wrenching tale of Hachiko, the most famous Akita not just in Japan but the entire world?! While most dogs on this list are active and need tons of physical and mental stimulation, the Akita is more than happy to just “Netflix and Woof”. These floof-balls were originally bred in Japan to track game during hunts and later to protect family homes. Akita love the cold and can bear harsh weather quite well thanks to their fluffy coats. Once a status symbol of the rich, these dogs are now beloved pets who are perfect for families with smaller homes. Brilliant, obedient, fiercely loyal, and the perfect cuddle buddy that’s the Akita for you!

These are just a few of the many dog breeds that look like wolves. Other notable mentions include Czechoslovakian Wolfdog, Utonagan, Tamaskan, and the Northern Inuit Dog aka the closest you can get to a Game of Thrones dire worlf! Which one of these beauties is your favorite? 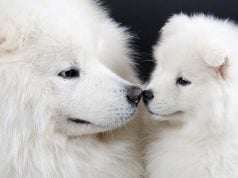 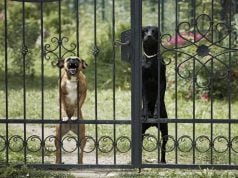 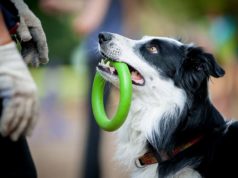 25 Smart Dog Breeds That are Easy to Train