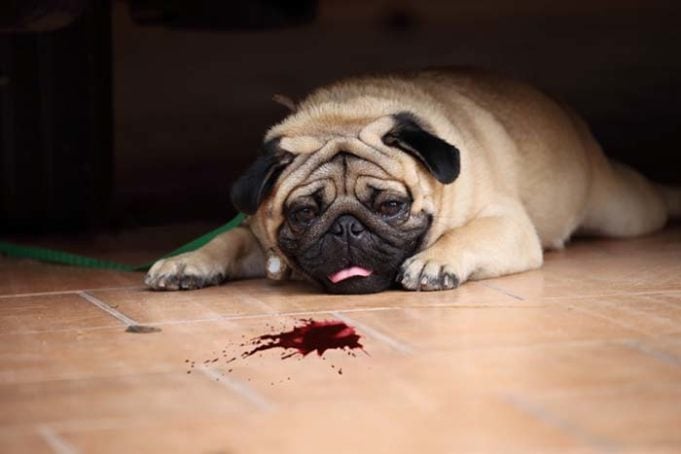 If you notice that your dog is coughing, this is generally not a cause for alarm. However, if you see that the dog coughs up blood, then the first you must do is head to the nearest veterinarian’s office – this is not the case of where you can try figure things out on your own. Do not wait to see if the cough goes away or if the blood stops or dries up.

When dogs cough up blood, it is a sign that something serious is going on internally. There are many different reasons why dogs could be coughing up blood, including: infection, internal damage and disease. Read on to find out more about the most common causes of dogs coughing up blood as well as potential next steps.

There are some infections that will cause your dog to cough up blood, and one of the most common is heartworm. If your pup has not been on a preventative or has missed some doses of the medication, they may have gotten heartworm, which is contracted from an infected mosquito bite. This requires an immediate trip to the vet. To determine whether or not your pooch has heartworm, your vet will perform a simple blood test.

Treatment for heartworm is extensive and expensive, but is necessary to save your dog’s life. The dog will receive a series of medication via injection over a period of time. While they are receiving injections, and during the time in between the injections, it is imperative for your pet to remain calm so they do not overexert themselves. Being active during heartworm treatment can be very harmful or even fatal to your dog.

Tuberculosis is a type of bacterial infection that can damage your dog’s respiratory system. If the animal has Tuberculosis, they may exhibit the following symptoms: coughing up blood in phlegm, weight loss, jaundice, increased thirst, and dehydration.

Even though Tuberculosis is rare in dogs, it can be transmitted through inhalation, so there is a possibility of them contracting it. There is also the possibility that dogs can infect humans if they are Tuberculosis-positive.

If your pet has suffered internal damage from a fight with another animal, vehicle accident, or other accident that has caused bodily harm and they are vomiting blood, they may have internal damage. You need to take your pet to the vet for testing.

Your veterinarian will most likely perform a physical examination. The various tests that the vet may run include: blood tests, urinalysis, x-ray, ultrasound, or CT scan. Treatment for internal damage will depend on the exact diagnosis, but may include: antibiotics/medication, surgery, and casting broken bones.

Anemia is the result of blood loss and/or a low blood iron count. Anemia-inciting processes include:

Anemia diagnosis includes running a variety of tests: blood tests, urinalysis, x-rays, and CT scans. Treatment for anemia usually includes blood transfusions. If the anemia is not severe then a supplement may be prescribed and dietary changes may need to be made.

Pancreatitis in dogs is when the pancreas becomes inflamed, digestive enzymes that are normally inactive until they reach the small intestine become active in the pancreas instead—resulting in pain and swelling as the pancreas actually begins to digest itself. In addition to coughing up blood, symptoms for pancreatitis are:

Cancer in the dog's lungs can be caused by tumors that grow in or spread to the lungs. These are the following lung cancer symptoms in dogs (in addition to coughing up blood):

Diagnosis is done through a panel of blood tests and x-rays. A true cure is not available for dogs; however, dogs can live comfortably with proper treatment. Treatment consists of removing the tumor(s) via surgery and prescription medication. 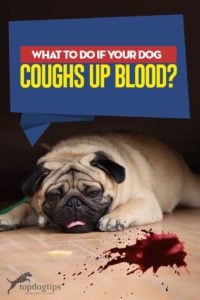 Other symptoms related to inflammatory diseases to look out for are: swelling, redness, severe pain, stiffness, and seizures.

Diagnosis is done through physical examination, blood tests, x-rays, ultrasounds, and CT scans. Treatment depends on what exactly is inflamed, the severity of inflammation, and other factors. Medication and surgery are the two most common treatments.

READ NEXT: 8 Causes of Bloody Diarrhea in Dogs