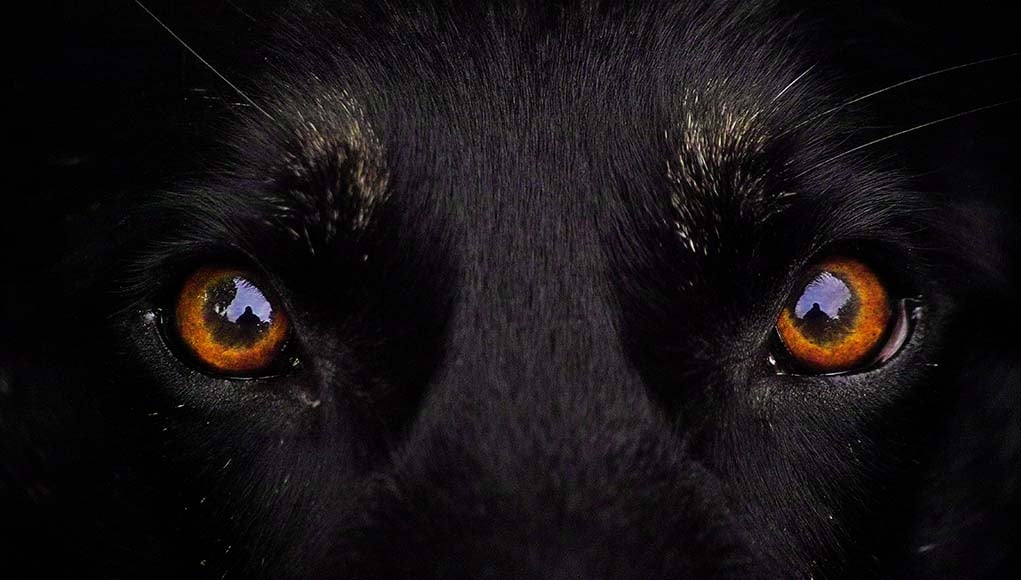 How dogs came to be domesticated from their grey wolf ancestors is a long and complex history.

And depending on which resources and scientific research you read, the dates that are given for the precise time period that dogs split-off from their grey wolf ancestors and began to evolve as a separate, sub-species that became today’s domesticated dog, can vary.

In some research, it is stated that the divergence of the domesticated dog from grey wolves first began somewhere between 14,000 to 15,000 years ago.

While other research presents the idea that the domestic dog actually split off from wolves much earlier than that, based on fossilized evidence dating the beginning of modern dog domestication to 135,000 years ago.

In a lot of literature today, dogs are still considered to be a sub-species of grey wolves.

It is known that throughout history, and still to this day, wolves will seek and breed with domestic dogs when they are in area that have low wolf populations.

When in need of a mate, wolves will interbreed with dogs, making the two species more closely related.

Timeline of Wolves and Domesticated Dogs' First Appearance on Earth 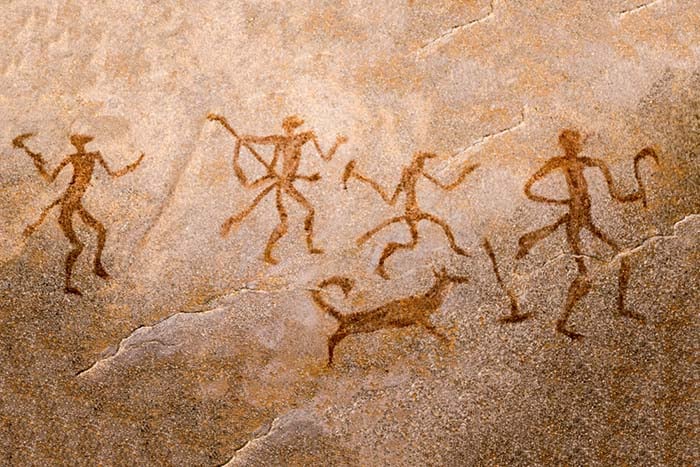 The oldest know ancestor to gray wolves, called creodonts, are known to have lived in the northern hemisphere of the world, as it existed, between 120 to 100 million years ago.

This remains a somewhat grey area because many scientific resources report that conformation from morphological factors combined with fossil records indicate that domesticated dogs first diverged from grey wolves 14,000 to 15,000 years ago.

Yet, there are genetic studies that propose an earlier divergence of dog from wolf that took place up to 135,000 years ago.

Genetic studies suggest that either scenario could have happened.

In the year of 2014 two separate scientific studies that utilized the results of the “whole genome sequencing” of today’s dogs and wolves, combined with radiocarbon dating, and the scientific evaluation and re-calibration of a wolf’s mutation rate to reveal that the genetic divergence of today’s domestic dogs from grey wolves began between 40,000 to 27,000 years ago.

In the year of 2017 an international research team analyzed the DNA of two prehistoric dogs to better understand the history of dog domestication.

The team’s published, peer-reviewed results revealed that dog domestication first began during one, single event in which today’s modern dogs split-off from a population of grey wolves, between 40,000 to 20,000 years ago.

RELATED: Study Comparing Wolves and Dogs Explains Why Canines Are Our Best Friends

Dog Domestication Timeline via Their Interaction with Humans 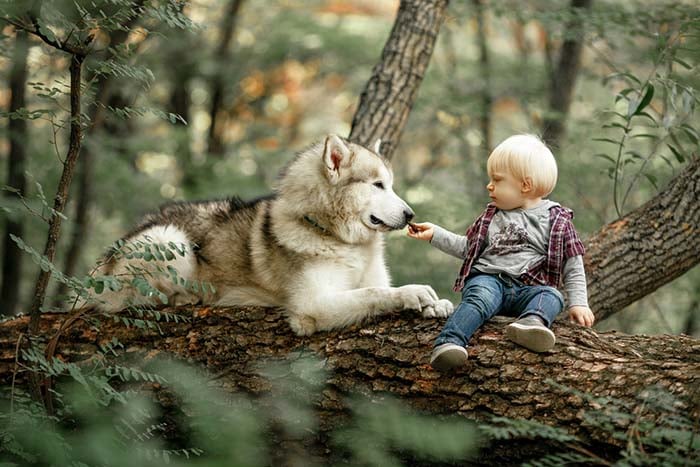 The first human primates, called homo sapiens began to evolve and expand from about 1.8 million to 10,000 years ago.

A domestic dog’s fossil was discovered in Yorkshire, England.

The heads of two domestic dogs were discovered in western Russia.

Men during this time period had to hunt animals and gather plants for food to survive.

They began to realize that wolves were high up on the food chain like humans but were fairly easy to contain, feed, and train.

So man began to contemplate the potential of the human species working together with wolves, so that wolves could assist humans in hunting and gathering, and offer protection against large predators such as bison, as well, because wolves were able to take bison down, whereas few to no other species (beside human) was capable of such a feat.

Consequently, during this time in history is when dogs began to truly evolve into today’s domestic companion to humans, by way of ancient man bribing wolves into their own tribes by providing the wolves with consistent shelter and delicious food, as a trade-off for the wolves working with their humans to hunt and take down other mammals.

Realizing how well their relationship with wolves worked out for them, man began to purposefully breed the semi-domesticated wolves, which in-turn led to the first breeds of the domesticated dog, which eventually led to the wide-variety of different domestic dog breeds that exist today.

Archeologists discover fossils and remains of domesticated dogs in Europe, Asia, and the Americas, specifically located at Mesolithic sites.

A collection of canine bones that are small in size are found in the Middle East. The fossilized remains of a puppy are discovered, purposefully and carefully buried with a human being’s remains in a Natufian burial site, located in the Jordan valley of Israel, indicating that humans and domesticated dogs were becoming close companions, enough so that humans were buried along-side their domesticated dogs.

This finding also indicates that by this time in history, domesticated dogs were loved and respected enough to be given proper burials.

The first dog remains to show dramatic signs of the physical changes that took place to differentiate domestic dogs from that of their wolf ancestors are discovered in a cave in Iraq, in which dog bones of a dog that had been specifically bred to have much smaller jaw bones and smaller teeth than wolves, was found.

Domestication of dogs in China began.

The first ancestors of today’s domesticated dog species of bloodhound, foxhound, and dash hound first appeared, but would not be fully established as the breeds that they are today before the 1800's.

Most breeds of this time period’s domesticated dogs were related to today’s basenji, saluki, greyhound, mastiff, and dachshund dog breeds, and were still considered to be subservient to humans and were treated as such, mainly being used as hunters or watch dogs rather than kept as precious and pampered pets.

However, one breed in particular, the jackal, was considered to be sacred during this period in history, and was treated as such.

At this point in time, dogs were being used by humans solely for domesticated purposes. Fun fact is it was during this time period that the Romans first created the original versions of the “Beware of Dog” signs that we still use today, only their signs were meant to be used to warn people to watch out for the dogs laying around, and to make sure not to step on them, instead of as a warning to trespassers to stay away or else “Beware of Dog”.

This fun fact reveals that the human’s attitudes from seeing dogs as being solely subservient creatures that were meant only to serve man, and help out with human’s hunting and work-load requirements, began to shift towards human’s current attitudes regarding dogs as pets that should be treated kindly and fairly, with love and respect during this period of time.

A mural-style painting discovered near Pompeii reveals that the Romans used domesticated dogs to help guide them.

Whether this practice evolved due to human’s needing a better pair of eyes to see them through dark passage-ways, and/or simply due to the loss of sight that comes along with old-age and certain illnesses.

The painting that was found provides evidence for the first domesticated dogs that were used as guide dogs appearing during this period of time, paving the way for today’s amazing service animals.

Women are known to keep lap dogs in Rome and China, specifically the Pekingese breed. This took place during this period of time because the warmth that this breed of dog provides by being kept in a human’s lap was thought to be a cure for the common stomach ache.

During the times of the Romans is when we know that certain breeds of domesticated dogs began to be purposefully selected and bred to produce dogs of a specific color, for specific roles.

For instance, in order to differentiate domesticated dogs from wolves, a shepherd’s dog was bred to be white in color, whereas a farmyard dog should be bred to have a black coat to be better able to scare, and chase away thieves looking to steal from the farmyard.

This concept and selective-breeding behavior paved the way for the extent of selective-breeding that has led to today’s 400+ breeds of domestic dogs that have been bred based upon the individual needs, beliefs, and desires of specific groups on people, all over the world.

During this time period, (which is the 12th Century), is when history reveals a dramatic increase in all animals, including domesticated dogs, as being documented as creatures who should be respected and empathized with, instead of abused and brutalized.

This is a sentiment that has stuck with humans, to this day, and that has caused our beliefs and opinions about the ethics of things such as hunting and trapping animals, as well as using them to experiment on for medical advances, and to take fur and various other materials from for our own cosmetic uses, to evolve and shift over time. Which has resulted in the fair and ethical treatment of animals being a controversial and hotly debated topic throughout time, and currently.

Dogs are among, if not the most loyal creatures on Earth, and we have our ancient ancestors to thank for taking in wild wolves and turning them into domesticated dogs. 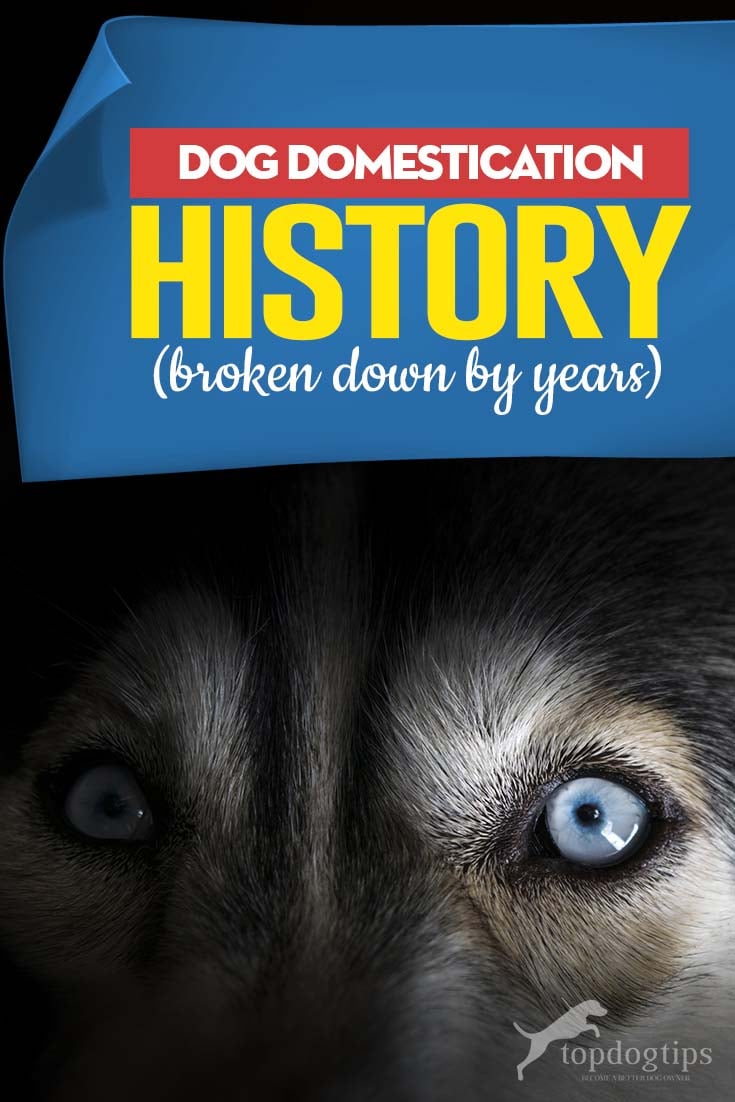