Home Dog Care Dog Whining for Attention: Why and How to Stop It 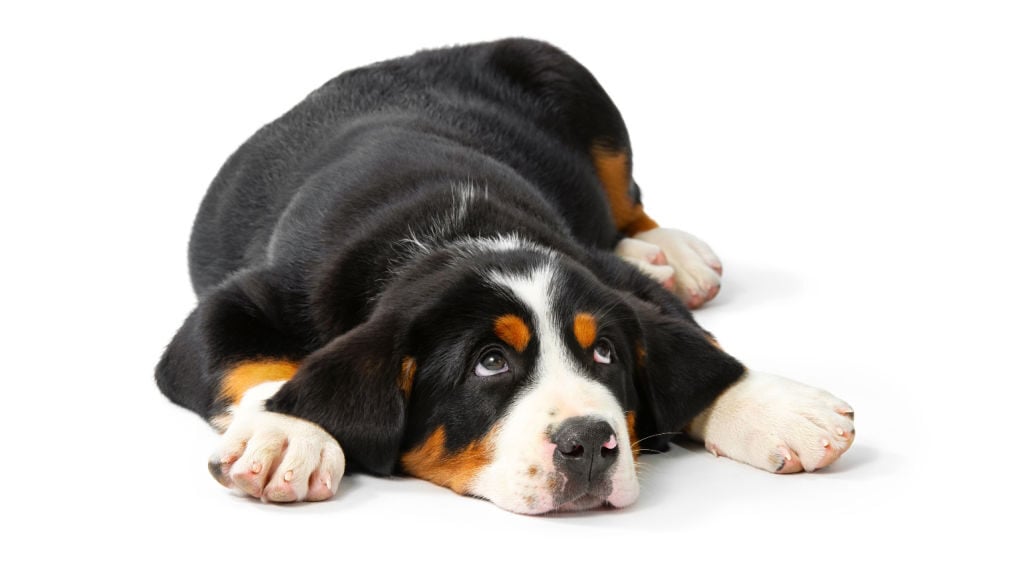 IS YOUR DOG WHINING FOR ATTENTION? Is he making crying sounds and keeps on looking over you with those big, adorable puppy eyes?

Making sounds, even how worrying it is for us humans, is pretty normal for dogs.

They bark, howl, sigh, and groan when they want to say something to us. It's their main way of communicating, after all.

But how would you know if your dog is whining for attention or pain? When should you ignore the whining and when should you worry?

Excessive whining in dogs may be bothersome for some but not so much for others.

Either way, it's best to know the actual reasons behind it and how to deal with it.

In this article, let us give you a couple of probable reasons why dogs whine and how to stop dogs from whining. 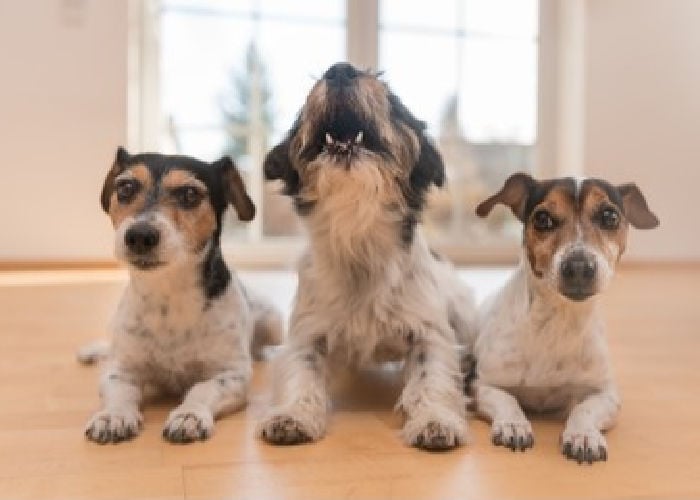 Dog Whining for Attention: Why Do They Do It?

Sometimes, it's just difficult for us to understand the needs of our dogs. If only they could talk!

But most often than not, whining in dogs has a meaning behind it. They won't do it just for the heck of it.

Knowing how to decipher the sounds our furry friends make is always useful and one that we can all learn. 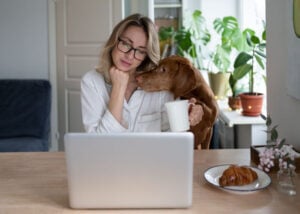 Some dogs only whine when their favorite human is just nearby.

If your dog does it more often when you're busy with something that does not involve them like talking with someone, scrolling through your phone, or using your laptop, he's letting you know it's time to drop it and cuddle him.

Your dog's whine lets you know they're bored and/or jealous and need you to notice them too. Yes, they can be dramatic that way.

A dog whining for attention can also mean they want something and need you to help them get it.

Be it a treat, a toy, or opening the door to go outside—you just have to look for the signs to know what they want.

Their whining may be accompanied by banging on their food bowl or scratching on the door. Pay attention to other signs to know how to appease them.

But this doesn't mean you have to give in every time they're whining. Or else, they'll get used to it, and the whining will probably get more frequent and intense.

Remember that whining is a learned behavior.

Whenever we give in to what they want when they whine, they learn that it works! And they're probably going to do it over and over again.

Other Reasons Why Dogs Whine

Apart from seeking your attention, there are other reasons why your dog just won't stop whining.

Whatever your dog's behavior, it's always important to rule out any medical issues or injuries.

When dogs whine (and this is especially true for older dogs), something might be uncomfortable or hurting them.

Examine him closely. If you don't see any external injuries, it could be joint pain, stomach ache, or any other discomfort from the inside.

It's best to bring him over to the veterinarian for a closer examination just to be extra sure. 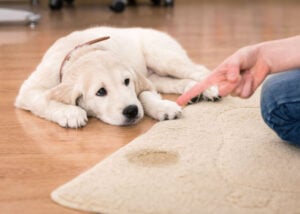 Dogs may whine as a response to their owner's anger.

It could be their way of appeasing you and saying they're sorry.

But did you know that there's no evidence that dogs can feel guilt or shame? On the flip side, there's also not enough evidence to say that they don't.

And they're a smart bunch. They learn what their owners think is appropriate or inappropriate behavior. Dogs are also sensitive to our reactions.

If you scold them for chewing off the furniture or peeing inside the house, they'll display guilty behaviors which include whining.

Whining is also a dog's way of letting out too much excitement. You spend all day at work, and they didn't get to see you for hours. Sure, they're excited to greet you!

Excited whining is often accompanied by barking, jumping up and down, running around, and wagging their tails.

If their excited whining bothers you, there are ways to teach them alternative behaviors.

Just be ready to ignore them for a while even though you've missed them too!

Separation anxiety is common for most dog breeds. And whining is common, and even involuntary sometimes, for dogs to cope with stress and anxiety.

Usually, your dog will also show other symptoms like pacing, panting, drooling, and urinating.

Apart from being left alone, other events that can scare or startle them will also trigger whining, like loud noises.

However, there are times when anxiety can be a sign of something more serious, especially for senior dogs.

Canine dementia is one disorder you may want to ask your veterinarian about. 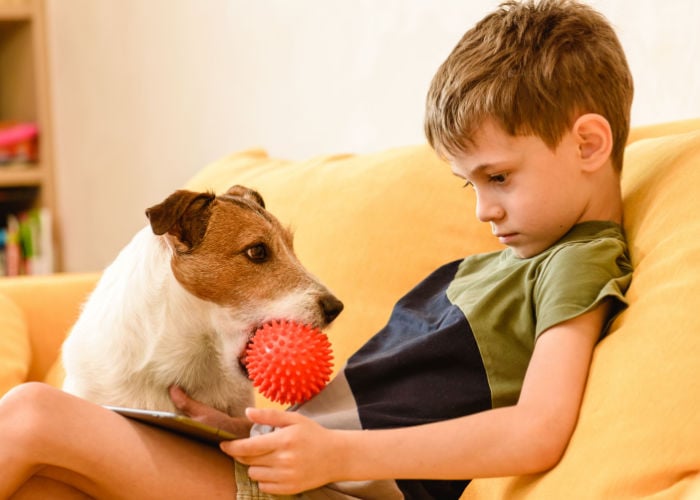 How to Stop a Dog Whining for Attention?

Correcting a puppy's whining behavior is easy—they're still young after all.

If your dog whines to get your attention or anything he wants, you have to let him know that being quiet gets more rewards fast.

Say, he's asking for a treat. Try to ignore him until he quiets down. You can then give him the treat only when he's settled. 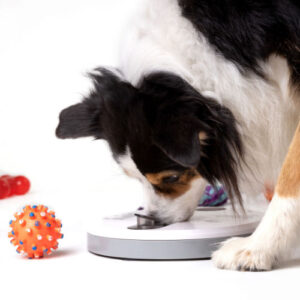 It's also better to get him an automatic food and water dispenser.

This will allow your dog to feed and drink when hungry or thirsty as opposed to following you around whining and begging.

You can also try to teach him to ring a bell near the door to let you know that he wants to go outside.

But if he's only asking for your attention in general, like he just wants to play or cuddle with you, ignore him. Don't even look at him.

Eye contact, touching, or talking is attention—they'd still get what he wants, and he will only repeat it.

Use big gestures like turning away, walking out of the room, or crossing your arm to let him know his behavior is not welcome.

On the other hand, rewarding your dog for doing a desired behavior is also important. 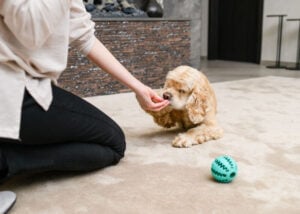 Actively give him treats and cuddles when he's behaving.

Do this regularly so he'll understand that he'd still get your attention without whining; he just has to wait for it.

Try to enrich your dog's environment, too. Give him toys and activities to play with when he gets too bored.

It also helps to tire them with outdoor activities daily for 30 minutes.

If you still find it difficult to manage your dog's excessive whining, it won't hurt to seek the help of Certified Professional Dog Trainers.

RELATED: Excessive Barking in Dogs: How To Handle It?

FAQs on Dog Whining for Attention

Should I ignore my dog when he whines for attention?

Ignoring your dog once in a while when he whines for attention won't hurt you or him.

Under certain circumstances, it's crucial to ignore him and not let him get his way. Any unwanted behavior must be nipped in the bud as soon as possible.

This will let him know that whining for attention doesn't work and will discourage him from doing it again.

However, make sure that you only ignore him when you're certain his whining doesn't mean something serious.

In some cases, a dog's whine is his way of letting you know he's hurt and that he needs your help.

Should I scold my dog for whining?

Scolding is still equivalent to giving your dog your attention—just like he wanted.

Raising your voice may even add up to the stress he feels, which will only make his whining worse.

Rewarding them for a desired behavior and ignoring (not punishing!) their unwanted behavior will teach them more effectively.

How much attention does a dog need a day?

Depending on the breed, some dogs need more time and attention from their owners than others.

But in general, dogs need a total of not less than 2 hours of socialization with humans and other pets.

This, of course, can be broken down into increments throughout the day.

Dogs that don't get enough attention can fall into unwanted behaviors, like chewing off furniture, excessive whining and barking, and even aggression.

Just like humans, dogs are social creatures. While it's important to let them get used to being alone by themselves from time to time, it's equally important for them to socialize. 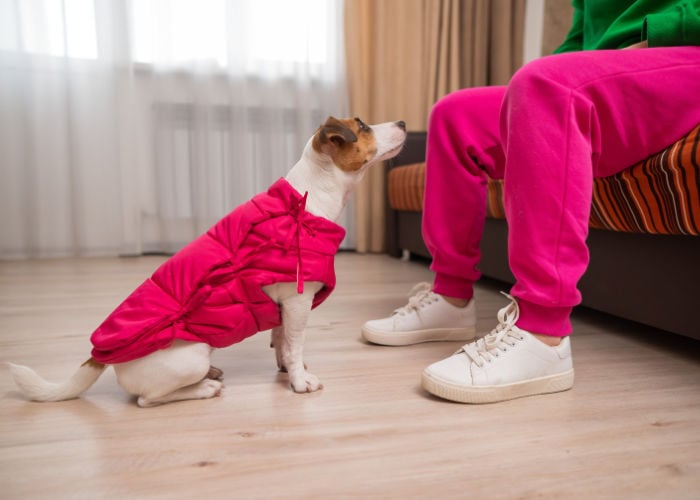 A dog whining for attention is trying to tell you something. It could be something serious, or it could not be (hopefully!)

Ultimately, it's important for all dog owners to know how to determine the reason behind excessive whining in dogs.

We hope this article gave you a good idea of why your dog from whining for attention and how to manage it.

Remember, help is always available whenever you need it.

READ NEXT: 5 Ways to Solve Your Dog’s Barking Problem

How To Pick the Right Pet Sitter