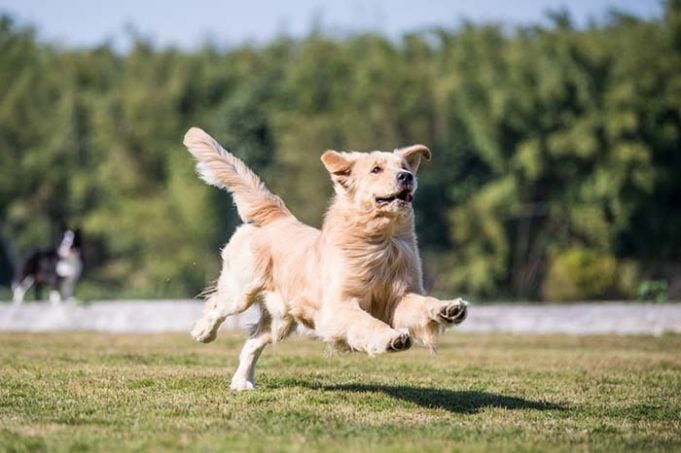 Researchers from Genethon, the AFM-Telethon laboratory, Inserm (UMR 1089, Nantes) and the University of London (Royal Holloway) recently demonstrated that the injection of a “shortened” version of the gene causing Duchenne muscular dystrophy is actually effective in restoring muscle strength and stabilizing clinical symptoms in dogs affected by this disorder.

This is a huge step forward in finding treatment for this rare genetic condition in dogs. The results of the study were published in the journal Nature Communications. Funds for this research were raised by donations from the French Telethon.

What is Duchenne Muscular Dystrophy?

Duchenne muscular dystrophy is a rare progressive genetic disorder. In humans, it is the most common neuromuscular disorder in children, affecting 1 in 5,000 boys. It involves all muscles of the body.

Some Golden Retrievers are naturally affected by this disorder. Symptoms include general muscle weakness or atrophy, heart abnormalities, and poor weight gain.

DMD involves genetic abnormalities in the gene which encodes dystrophin – a protein which insures proper muscle function. This gene is significantly large, and therefore it is impossible to insert the entire DNA for dystrophin into viral vectors (which is usually what is done in gene therapy).

But this research revealed that injecting microdystrophin, which is a shortened version of this very large gene, was actually effective in improving the muscle function in dogs with this disorder.

The team of scientists worked to develop a gene therapy drug which combined a viral vector with the microdystrophin, and found that this permitted the production of that vital muscle function protein.

RELATED: Science Gets a Step Closer in Curing a Rare Disease in Dogs

12 dogs with DMD were tested for this research. The microdystrophin was injection intravenously, therefore making it into the entire body of the dogs (as opposed to just one site, as would be the case with other types of injection).

Upon injection, researchers observed that dystrophin levels returned to high levels, and muscle function returned. Clinical symptoms were observed to stabilize over a period of 2 entire years following the injection. No immunosuppressive treatment occurred beforehand, and no side effects presented.

What this Means for Humans

Because the dogs with DMD have the same clinical symptoms, and have similar weights to human children affected by the disorder, this is a huge step in developing the same treatment for humans.

Because this treatment was so successful in dogs, it is now possible to develop clinical trials in human patients.

This is the first time that the whole body of a large animal has been able to be treated using this protein.

According to Caroline Le Guiner, this study’s main author, progressive treatment also allows treatment of all patients with Duchenne muscular dystrophy, no matter what their genetic mutation.

Le Guiner says these studies are exciting, and exceeded her team’s expectations. They have been working for many years on effective gene therapy treatment for DMD, and this is a giant leap forward toward clinical trials.

With the foundations firmly in place, scientists can now get to work on next steps to produce advances in drugs used to treat children with DMD.

READ NEXT: Cushing's Disease in Dogs: Symptoms, Diagnosis, and Treatments