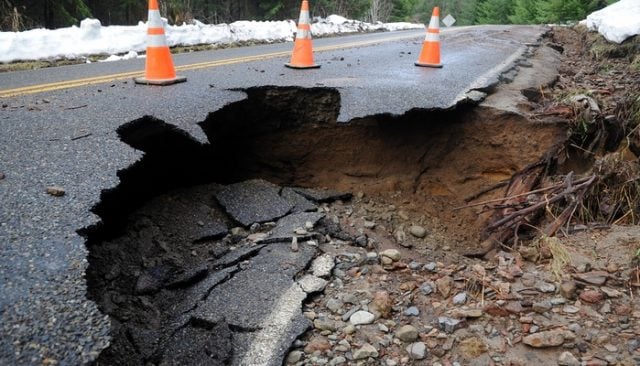 Getting buried in a sinkhole for 72 hours would be quite scary and unnerving. I can't imagine what it would be like! That lonely, hopeless feeling stuck in a pool of mud would be physically and emotionally crushing. Even for the strongest amongst us.

Now, if you think that getting buried in a sinkhole is too terrible that you can’t wish it even on your worst enemy, then you would want to crown Maverick for coming out strong after braving a 72-hour long ordeal. There is no doubt it was tough for him, but the 12-year-old German shepherd dog from Missouri must have the nine lives of a cat!

Although he has other shocking stories to tell– he survived walking into a racoon trap and being hit by a car – this incident was tragic and scary. The whole thing happened on the 4th of February, 2016 when Maverick went missing. His owner, Lisa Valkenburgh looked everywhere for him, to no avail.

Two days into the search, and they still could not find him.

The family got worried and feared for the worst. Since it was in the winter, the family was afraid he might have drowned in the nearby lake. Although dogs naturally make wonderful swimmers,  the cold weather would make Maverick's legs too weak for swimming, as he also suffers from a severe case of arthritis. That means it would be very easy for him to drown.

Fortunately, for him, the owner discovered where Maverick was. As she walked along a road near her house, she heard a faint howl coming from underground. Valkenburgh knew that must be Maverick and thought maybe he was trapped in a drain pipe in a ditch.

However, when she discovered a sinkhole at the side of the road and walked over  to it, she was shocked to find  Maverick there. He had fallen head-first into the sinkhole which was around five feet down.

And there was no way he could have saved himself.

The family came over to try to dig Maverick out, but, afraid that the ground around the sinkhole may collapse and completely bury him, they contacted the fire department for assistance instead. The crew was fast. They dug to release the suction clay that held Maverick and finally pulled him free.

He was dehydrated and a tooth had punctured his lip in the fall. They rushed him to the nearest hospital where it took three days of treatment and care before he was discharged. The family is grateful for the hard work of the rescue crew. If it was not for their assistance, they probably would have lost Maverick.

It was a scary situation for the dog, but finally he made a 100% recovery.

Now that it is so easy for our pets to slip out of our watch and disappear, the question is how often do you keep an eye on your dog, especially when you let him out?

How would you as the dog owner ensure that your dog enjoys her freedom and at the same time ensure that she doesn’t wander too far to get hurt? It’s everyone’s responsibility to ensure that our four-legged friends are happy and safe, wherever they are.