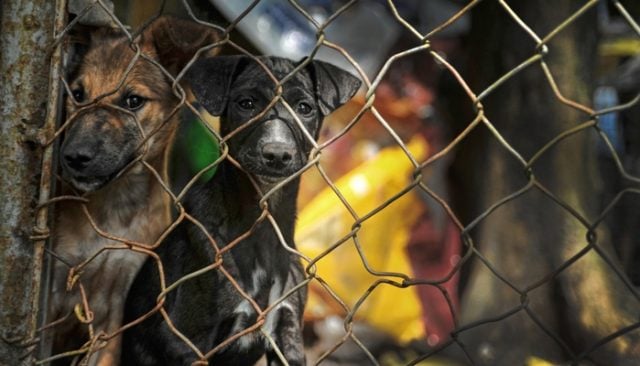 Despite the outcry of thousands of concerned animal-lovers and the pouring in of petitions to stop this cruel and barbaric practice, the consumption of dog meat and dog meat festivals still run rampant in parts of Asia. But for two lucky Huskies, their horrific journey through the dog meat trade and eventual slaughter was halted, and they were given a whole new lease on life.

Meet Cedric and Mendy (as they are now called), who were once just two more sad faces among the crowded cages of a dog meat farm in Korea. Here crude kennels were stuffed full of canines awaiting their horrible fate without so much as a cool drink of water to quench their painful thirst. The woeful whimpers and whines filled the air as desperate dogs tried to break free from their constraints, eventually giving in to their pain and neglect. 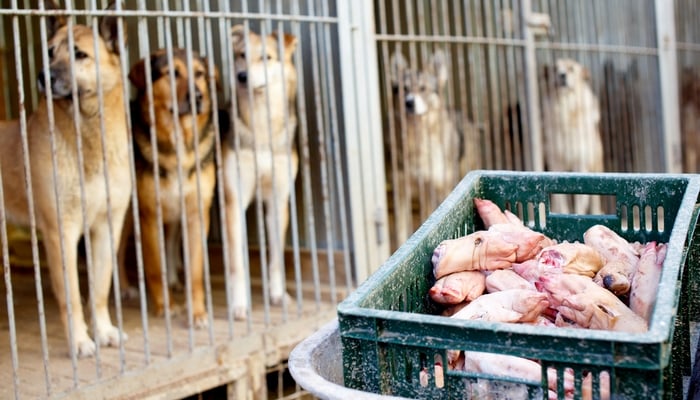 However, that was all about to change. Thanks to some dedicated folks, these dogs were about to be freed from this unimaginable situation. But the dogs weren't the only ones that were going to make an astonishing discovery…so were their rescuers.

There was something special and different about Cedric and Mendy. Out of the 169 dogs, this pair were both jumping up on the cage door to greet their rescuers.

In comparison to the other broken-spirited, abused, neglected and cowering cellmates, this was a total shock.

Rebecca Burton, vice president of direct animal care & lifesaving partnerships at St. Hubert's Animal Welfare Center in New Jersey, was thrilled to see these dogs so seemingly untouched by the cruelty of their surroundings. Could it be they had formed a special bond that saw them through the horrors of everyday life in the dog meat trade?

Even after they were separated for only a short period-of-time when being transferred to the New Jersey shelter, the Huskies were jumping all over each other in pure joy when they were reunited. The shelter staff also report that Cedric is very protective of Mendy and will often run back to her when they're out playing, just to be sure she's alright.

This lovable canine-duo were very lucky to have each other. They managed to find the tiniest glimmer of hope and happiness in the most brutal of circumstances. Perhaps, this puppy-love was their saving force.

Although, only 12 to 16 dogs will be arriving at one time, the shelter plans to get all these pooches out of this terrible situation. And with time, patience and a whole lot of love, they hope to be able to place all these poor furry souls in new forever homes.

As for Cedric and Mendy? The shelter has made sure they have been vaccinated, altered and have a clean bill of health. They've even learned how to walk on a leash and socialize with other dogs. Now all that's left to do is find the perfect home where this devoted pair can spend the rest of their days together learning what it's truly like to be someone's canine companions.