Your dog’s digestion is important for good health and a long life. Feeding times and portion size can be confusing enough, but then you are also keeping track of what’s happening on the other end when your dog needs to go out and do his business. Just how long does it take for dogs to digest food? 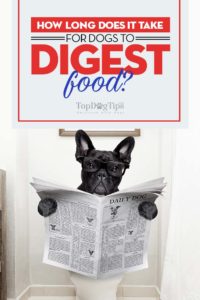 Keeping track of what is going on with your dog’s eating habits and waste is important in order to be aware of any health changes. Knowing how long dog digestion takes is helpful.

Generally, canned food moves through your dog’s system a little faster than dry food to completely digest, whereas the all kibble dry food may take almost twice as long sometimes:

Your dog’s digestive system is only similar to yours, but it has its own unique differences that you should know. When your dog begins its digestion, many times it starts before he even bites into his food. You can observe this when your dog begins to drool excessively. Let's not get ahead of ourselves. Let's first look at how long does it take for dogs to digest food. 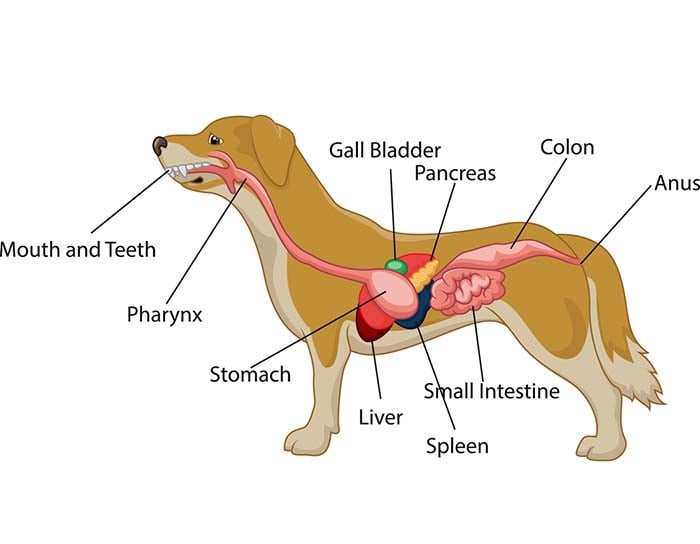 It Starts with Saliva

You may have already learned that Pavlov’s studies show that saliva has an important part of the digestive process. You, too, can notice the salivating begins when you offer food to your dog. Sometimes your dog can begin drooling before he even sees any food, just from the smell of cooking food in the house.

Saliva does more than just keep your dog’s mouth nice and lubricated, and you need to learn this if you're trying to figure out how long does it take for dogs to digest food. It is the important beginning of the digestive process. Your dog has several different saliva glands that all have different functions in the mouth.

The dog’s slobber contains enzymes, and as your dog chews the enzymes help to break down starches into individual sugar molecules. As the dog chews up his food, the saliva moistens and begins breaking down the food to help lubricate its passage through the esophagus down into your dog’s stomach.

Now that your dog has chewed up his food and it has become a slippery blob, this blob is now scientifically known as “bolus,” according to National Geographic. The bolus is now on a journey through the esophagus, and the more saliva or the more slippery it is, the easier the journey will be. But, how long does it take for dogs to digest food?

Going into the stomach is just a part of the journey that the digestive route takes. After the stomach does its work, the path goes onward to the small intestine.

Once the small intestine absorbs needed nutrients, the journey continues to the large intestine or colon. After the material is further digested, it is finally passed out through the rectum. You recognize this end process when your dog is taking that familiar position in the back yard.

The bolus moves from the esophagus into your dog’s stomach. Your dog’s stomach is a super-acidic environment. Being an omnivore, your dog is able to digest things like bone and raw meat.

In the stomach, the semi-solid food called bolus is rendered into a highly acidic goopy substance which is now called “chyme.” The stomach muscles along with the acidic environment work much like a cement mixer and churn the food until it is nearly liquefied.

Your dog’s stomach acid is far more acidic than a human’s and is a type of hydrochloric acid. The lining of the stomach is covered with a thick mucus like substance that naturally protects it from the strong acid. Now that your dog’s food has been further broken down by stomach acids and enzymes, it is now called chyme and is ready for the next part of the digestive system – the small intestine. 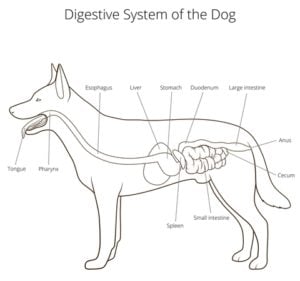 Now that the chyme has reached the small intestine, the real work of digestion (which is the removal of key nutrients that can be taken into the bloodstream and used by the body) is done. The small intestine is the longest part of the digestive system and can be up to 4 times the length of your dog’s body.

If you're wondering how long does it take for dogs to digest food, it's important to understand the path the food takes through your pup's body. At this point, the chyme moves through the small intestine, which has three distinct parts:

Chyme enters the duodenum from the stomach and here it is chemically treated with enzymes and hormones that are produced in the liver and pancreas. This chemical treatment will reduce the acid level of the chyme.

The bile and pancreatic ducts connect the duodenum to the gallbladder and the pancreas, this allows for the enzymes produced by the liver and pancreas to mix in with the chyme and allow for further digestion. This portion of the small intestine is estimated to be about 10 inches long.

As the chyme moves through the jejunum, the villi work to absorb almost all useable nutrients and carry them into the bloodstream to be used by the cells throughout the body. Once the villi have removed the nutrients, the chyme is moved onward to the Ileum.

The large intestine connects the small intestine to the anus and has two primary functions. The first function is to keep the body hydrated by absorbing water and distributing it throughout the body. Its second function is to store fecal matter, until its ready for passage from the body.

Basically, the large intestine works much like a garbage compactor, which removes all the water and reconstitutes the chyme into a solid form called poop. It also provides storage until your dog is ready to go.

Science does not know what this projection is for at this time. The colon is the longest part of the large intestine and further connects to the rectum, which is the third and final part of this section of the digestive system.

Now that you know how your dog’s digestive system works and how long does it take for dogs to digest food, there is always a secondary problem. How should you deal with waste removal?

While it isn’t a ton of fun, it’s a job that has to be done. It’s good to handle it yourself, this way you can keep track of what is going on with your dog’s stools.

READ NEXT: How To Choose and Buy the Right Dog Pooper Scooper 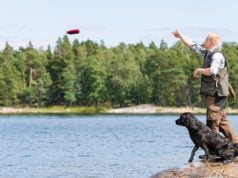