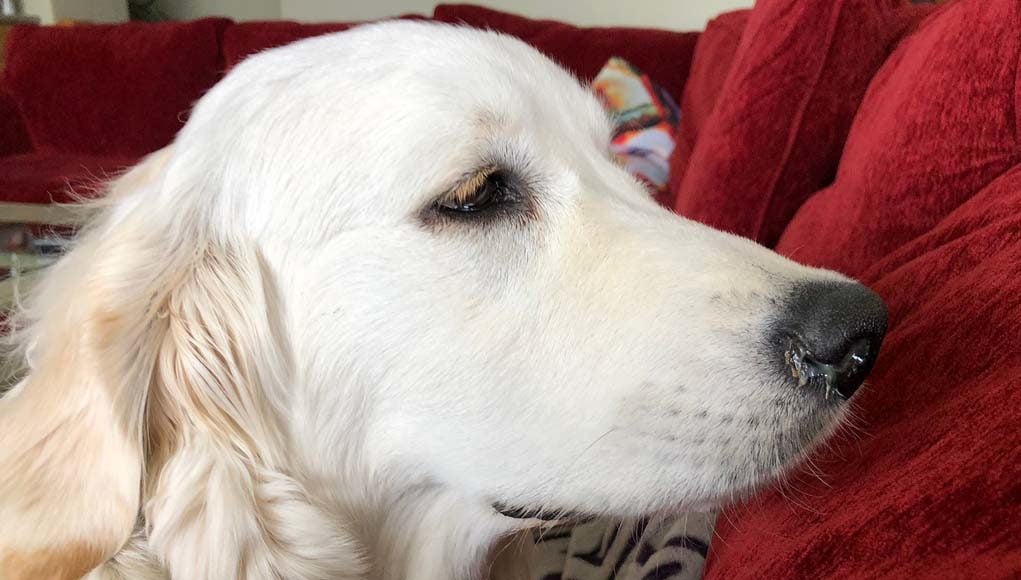 Nasal discharge in dogs can be a condition that means absolutely nothing. On the other hand, it can be accompanied by other symptoms like a lack of appetite, increased body temperature, lethargy, and sleepiness. If you spot these symptoms, call up your vet right away.

While a dog's nasal discharge may be harmless, the vet needs to determine if the dog with a running nose suffers from an allergy or bronchitis. In more severe cases, this can also be pneumonia or some other not so common but a worrying disease.

Runny nose in dogs, as a consequence of nasal or upper respiratory infections, is a condition that often affects flat-faced (brachycephalic) breeds such as:

These breeds have 3.5 times more chances than other breeds to have an issue with the upper respiratory tract resulting in nasal discharge.

Causes of Nasal Discharge in Dogs

Clear nose discharge in dogs usually lasts a few days without any severe consequences. However, once the color of the leakage changes and become smelly, yellow, green, or cloudy, it's likely a symptom of an infection. In case the dog has an additional problem with breathing, it's time to visit a vet to diagnose the cause and start the therapy.

If nasal discharge occurs in the season of allergies, it is the first thing to check out. In general, allergies are the most common reason for abnormal secretions in pet dogs. Even though they may appear in puppies as soon as they turn six months old, the most affected are usually dogs older than one year.

A dog may react to:

In most cases, a dog's nasal secretion is colorless and followed by sneezing, itchiness, coughing, eye discharge, nosebleeds, or hard breathing. If the problem is severe, the vet may suggest an allergy test as a safe method for establishing the diagnosis.

After determining the particular reason for the dog's allergy, therapy will include antihistamines, steroids, immunosuppressants and other allergy meds.

Except for flat-faced dogs, breeds with floppy and soft nose cartilage are prone to nasal discharge more than others. When their nostrils are too small and narrow, surgery is recommended, but not while the dog is too young.

The results of such surgeries are excellent, and studies noted a significant improvement in the functioning of the respiratory tract in 90% of these dogs after surgery.

Surprisingly, the common reason for runny nose in dogs is blockage of nasal passages with grass, soil, seeds, or even bugs. Sporting and hunting dogs may suffer from an issue because of twigs in the nose.

If the physical disturbance is a reason for this condition, the dog will sneeze, scratch their nose, and maybe suffer from nosebleeds.

If the foreign body is visible, it won’t be too complicated to remove it with tweezers. Otherwise, the vet needs to solve the problem. In some cases, the intervention may require sedation and antibiotic therapy to prevent infection.

Foxtails are plants that are very common in California, the east coast, and states west of the Mississippi. They may cause severe health problems in dogs once they stick in the dog's nose.

Since their heads may get deep into the nostril and cause running nose and uncontrollable sneezing, visiting the vet is required. Your veterinarian will solve the issue by removing pieces of the plant by using a rhinoscope and alligator forceps.

Canine distemper is a contagious viral disease that attacks the respiratory system of unvaccinated elder dogs and puppies younger than four months. As a result, a sticky, yellow secretion from the nose occurs, followed by numerous other symptoms.

Depending on signs of infection, the vet may prescribe therapy that includes anticonvulsants, painkillers, sedatives, and antibiotics.

Vaccination of females a month before mating and puppies three times between their ages of two to four months will prevent this condition.

A mucous nose discharge, followed by a nosebleed, choking, or coughing, often indicates a bacterial or Aspergillus fungus infection. Therapy will depend on the primary cause.

Antibiotics are usually the medication of choice when a bacterial infection is diagnosed. The vet will prescribe anti-fungal drugs in the case of a fungal infection. In the end, as an ultimate option, surgery can be a solution when the dog has repeated infections.

It is possible that infection of a tooth, especially the roots of the third upper premolar, causes sneezing and nasal discharge in dogs. The reason is the closeness to the nasal passages, so infection can quickly pass from the tooth to the nose.

These microscopic bugs may reside in a dog's nose and sinuses and cause chronic smelly nasal discharge, itching in the nose, swelling, sneezing, nosebleeds, and abnormal respiratory sounds.

The vet will identify these canine mites (Pneumonyssoides caninum) through rhinoscopy examination and by taking a nasal swab. It is not hard to see these creatures under a microscope once an infestation occurs. Therapy will include highly effective drugs like Milbemycin oxime, Ivermectin, or Selamectin.

The blood, mucus, or pus discharge and noisy breathing that last for a long time can be signs of the occurrence of nasal polyps. Surgery is the treatment of choice when polyps are the cause of chronic nasal discharge in a dog. Unfortunately, they tend to re-appear, which often requires additional treatment.

The vet may suspect that it is a nasal tumor if there's a growth on one side of the dog's face. This type of tumors make up 1% to 2% of all cancers in dogs. Once this disease occurs, the vet will suggest surgery to solve the problem in case of benign tumors.

Unfortunately, 80% of them are malignant, and surgery is not a successful solution in such cases. Sometimes, radiation therapy may help, but the prognosis for dogs with nasal cancer is not very optimistic.

In rare cases, the reason for secretion from a dog's nose after eating can be:

You'll need to consult with a vet, but surgery is the only effective treatment for cleft palate and fistulas in dogs.

In most cases, nasal discharge in your dog is likely nothing to be concerned about. Even if it's a symptom of a condition, usually it will have an optimistic prognosis with a full recovery when therapy begins on time. Therefore, it is crucial to visit the vet immediately after the first symptoms occur.

The only exception is a case of a malignant tumors such as nasal cancer in the dog, which is when the dog has little to no chance of surviving for more than one year from the moment the disease is diagnosed. These cases are far more rare, however.

READ NEXT: My Dog Has a Runny Nose – 5 Things to Do

5 Tips to Get Your Dog in Better Physical Shape

Are Tennis Balls Bad for Dogs?

5 Tips to Get Your Dog in Better Physical Shape

Diana Beth Miller - Oct 26, 2020
As dog owners, we tend to take our dog to the vet for their annual wellness exam and to get their heartworm medication, hoping...