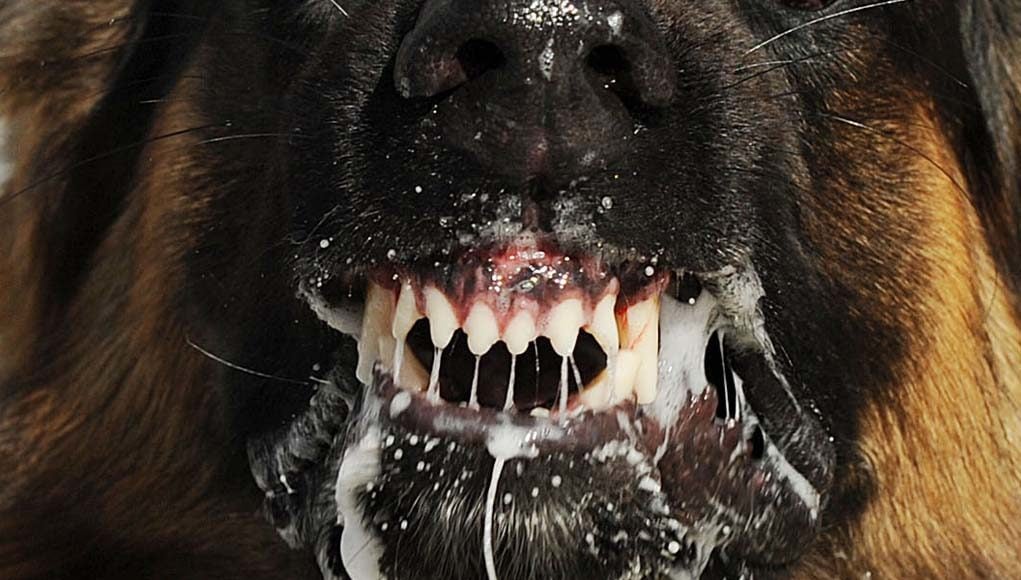 Rabies is a deadly preventable virus with almost 100% fatal outcomes in most cases (1).

If your dog becomes infected with rabies, there is little to no chance of survival, which is why vaccination is crucial (2).

Knowing about the signs of rabies in dogs may help you save your pet in some cases and yourself since rabies is a zoonotic disease (3).

What Is Rabies in Dogs?

The virus initially settles in the muscle tissue and moves to the dog's nervous system, ultimately entering saliva glands (7).

This is why most pictures of this disease show dogs drooling or foaming at the mouth, as the dog rabies photo above.

The rabies virus will kill the animal host in nearly 100% of cases (8). The virus cannot survive for longer than 24 hours outside the host, either a human or a domestic or wild animal.

The virus has been detected in almost all countries globally (9). Around one million animals die of rabies annually. Even today, rabies kills around 60,000 people each year.

Dogs themselves will most often get rabies through saliva coming out from another affected animal (12). It can be transmitted most easily by a dog bite.

Other transmission ways are also possible: eyes, nose, mouth, aerosol transmission, or organ transplantation, but they're much less common (13, 14, 15, 16).

Dogs are more prone to catching rabies if they have a scratch, laceration, or an open wound through which the virus can enter their body.

If you notice a dog with symptoms of rabies in your neighborhood, you should report it immediately to the animal control center to stop the spread to other animals.

10 Signs of Rabies in Dogs

Signs of rabies in dogs do not always show up immediately. Rabies symptoms can appear after ten days from the infection or even a few months.

In some rare cases, the incubation period can last for a year (17).

During the “no symptoms” period, the virus is in its latent stage where a dog usually behaves, and you cannot notice anything wrong with your pup.

There are three stages to rabies symptoms in dogs (18, 19). After being infected with rabies, your pet won't necessarily go through all of the below steps, and they may skip some of the symptoms. 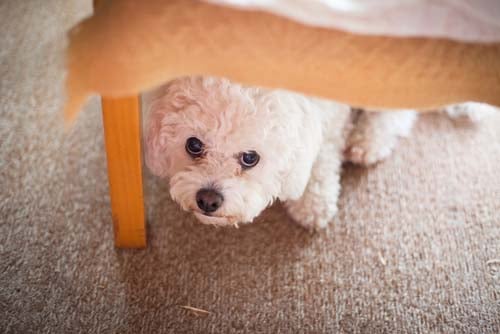 The first stage is where the symptoms are only starting to show differently.

Restlessness. A dog with rabies will have paranoia and behave as if they are constantly in fear or waiting for something terrible to happen.

Withdrawal. Dogs can become very shy and start hiding away from people, spending a lot of time alone.

Even if your dog is still friendly to you, they will lose their upbeat spirits and become melancholic.

Licking the Bite. If a virus carrier has bitten a dog, it will often lick, scratch, sniff, or bite infected wounds.

Aggression. Dogs with rabies can become unusually aggressive. Rabies aggression will show up in the initial stage, or it can come after the virus has reached a dog's nervous system.

The dog will bark at people and other animals, even inanimate things, and even try to bite them. 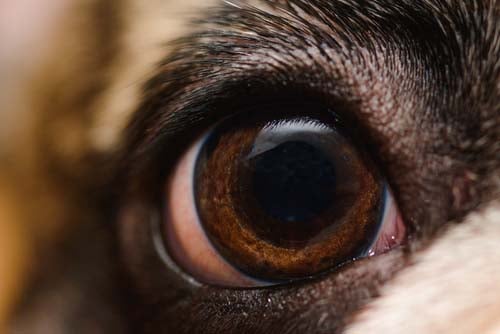 At this point, the virus has already reached the dog's brain and potentially affected the dog's spinal cord. This is when your pet will go through the aggression peak.

Furiousness. The dog will seem mad at times. They will bark at anything which passes by and attack other animals, people, and objects.

At this stage, a dog can also shoot their owner as if they do not recognize them anymore.

Dilated Pupils. If you look into a rabid dog's eyes, you will notice how their pupils are significantly dilated as if they saw something scary.

It will be accompanied by a dog's sense of confusion and disorientation, even in a tight space.

Seizures. In the advanced rabies stage, your dog's muscles will become affected. You will see the dog trembling and shaking heavily. Ultimately, the affected dog can have one or several seizures.

Lack of Fear. A dog with rabies will have paranoia and increased aggressiveness, overshadowing their habitual behavior.

They will attack everything and anything since all the innate and learned fear will disappear due to the brain being cloudy from the virus. 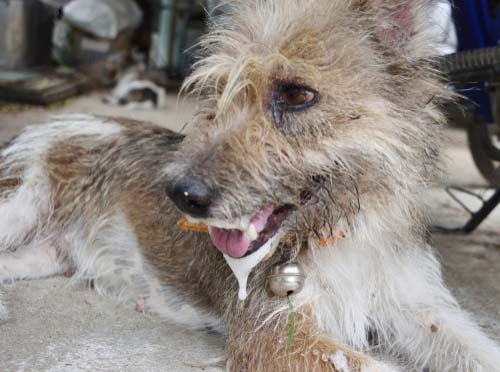 This last stage of rabies signs in dogs will include the paralysis phase. The paralysis can start as partial and, after a few days, turn into complete paralysis, coma, and death.

It is also possible for a dog to entirely skip the second stage and enter this last one immediately after the first rabies symptoms.

Salivating. This is a common sign of a dog having rabies. Once the virus enters saliva glands, it causes excessive drooling and drooling, which looks like foam.

The dog will seem unable to close its mouth, with the jaw-dropping down fully. Additionally, the dog won't eat, and they will lose control over their throat.

Paralysis. The paralysis will affect the dog's mouth, throat, and muscles. The dog's body will start to tremble, and they can lose control over their legs and ability to walk.

The paralysis will quickly spread to the other parts of the dog's body, eventually leading to coma and death.

After the first signs of rabies in dogs appear, the animal will pass through the active stage of a virus within around seven days as every phase is likely to last for approx. 2-3 days.

How to Prevent Rabies in Dogs?

The most effective way to prevent rabies in dogs is vaccination (20). Dogs that are vaccinated have a perfect chance of going through rabies unscathed.

To minimize the risks, keep your pet away from stray dogs and wild animals (raccoons, foxes, bats), as they have the most excellent chance of being the carriers of rabies.

It's advisable to avoid unpopulated and uncontrolled natural areas like woods. Instead of going there, you can always walk your pup through a park.

Keep your dog on a leash during regular walks, especially when camping or hiking. Ensure your pet obeys the most basic obedience commands so you can control the dog in case they decide to chase after a raccoon or a fox.

Please spread the word about rabies, its symptoms, and its consequences among your neighbors, friends, and family dog owners.

If more people are aware of its seriousness, it is more likely that they will report suspicious cases and vaccinate their dogs.

If you see a dog or another animal on your street with symptoms of rabies, report it to the animal shelter or animal control center.

Never attempt to catch a suspicious or abandoned dog yourself, as you can be infected with rabies as well.

If you suspect that your dog has rabies, it is crucial to call your vet immediately. The dog will receive a rabies booster shot and be under observation for one to two months.

When taking your dog to the vet, remember to restrain them just in case.

If you can, avoid touching the dog, and if you have to, wear thick protective gloves. If your dog is drooling, do not come close to their mouth.

While transporting your dog to the vet, please keep them in a crate until the veterinarian takes over.

Signs of Rabies in Dogs Summary

Rabies is a severe virus with an almost specific fatal outcome for its host. It is usually transmitted by bite, saliva, and open wound. The most common carriers of rabies are raccoons, bats, and foxes.

Signs of rabies in dogs range from the initial mild ones such as restlessness and licking the wound to the self-explanatory ones, like emphasized aggression, erratic behavior, and seizures, ending with the symptoms of foam at the mouth complete paralysis.

To prevent rabies in your dog, always vaccinate them. It is also advisable to keep your pet away from wild and stray animals and raise awareness about the dangers of rabies.

READ NEXT: 10 Things You Must Know About Dog Vaccines 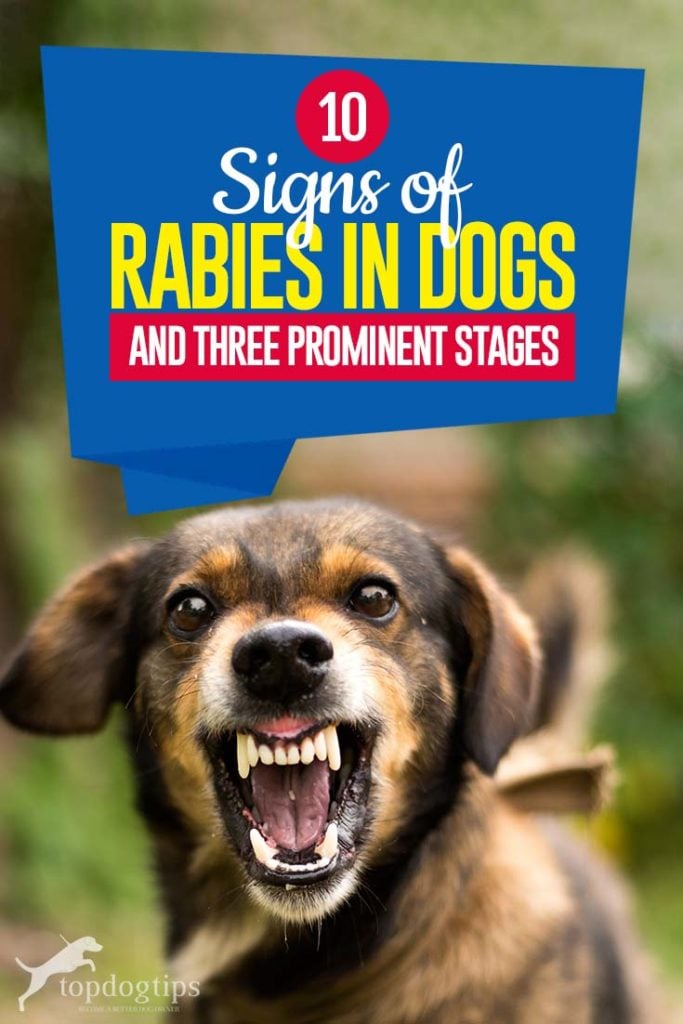