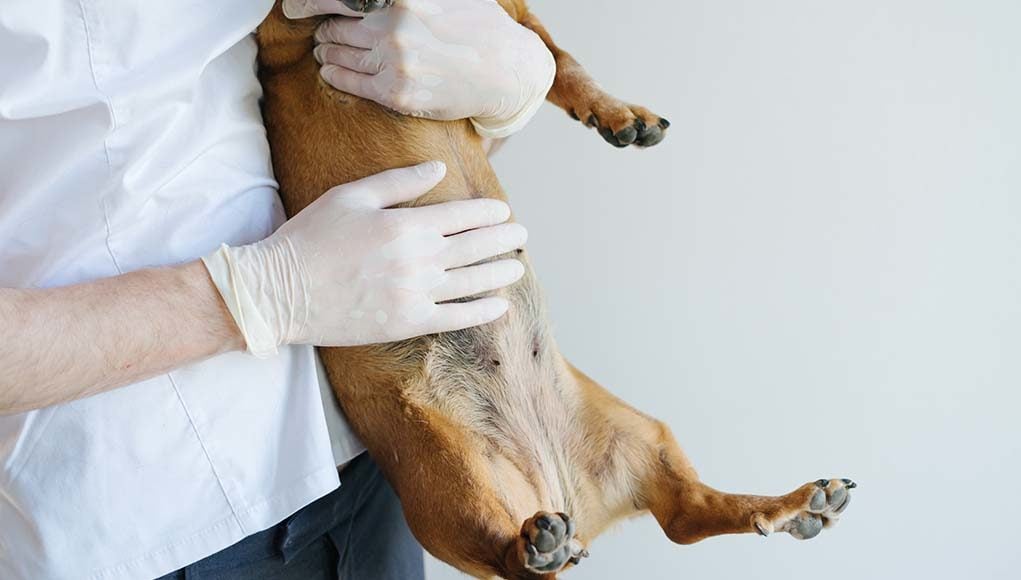 The acids, proteolytic enzymes, and pepsin from the dog’s gastric lumen maintain the pH acidity level, which value is usually about 2. Any disturbance of the acidity level may cause damage to the dog's gastric lining, which may lead to the development of stomach ulcers in dogs.

In most cases, this condition is treatable and is not lethal to the dog. However, untreated gastric ulcers may lead to anemia and perforations in the layers of the dog's stomach wall. Consequently, sepsis and shock may cause the death of the dog. When treated in a timely manner, dog stomach ulcer won't endanger the animal's life in most cases.

Causes of Stomach Ulcer in Dogs

It is difficult to pinpoint the cause of gastric ulcers in dogs since numerous health conditions can be a reason for this condition. Most causes include overproduction of acid in the stomach and destruction of the protective lining, which then leads to ulcer formation.

Previously, it was thought that helicobacter pylori affect the occurrence of this disease. However, it seems that this bacterium is not always directly connected with canine stomach ulcers, even though it is often found in biopsy results.

One of the proven primary reasons for the increase of gastric ulcers risk are NSAIDs. Other potential causes include:

Other common causation area of this disease is intoxication with:

It is well-known that German Shepherds may suffer from stomach ulcers after long-term ibuprofen therapy. Also, Rottweilers are one of the breeds with an increased incidence of this condition.

Symptoms of a Dog Stomach Ulcer

In almost all cases, dogs with stomach ulcers will show one or a combination of symptoms of this disease. Firstly, dark and tarry stools (melena) appear, which is digested blood that looks like coffee grounds.

The condition is often followed by vomiting with traces of bright red blood. Additionally, other symptoms may also show, including:

When the condition lasts longer, symptoms can be more severe, and include:

Diagnosis of Stomach Ulcer in a Dog

There are several ways to diagnose gastric ulcers in dogs. First, it is necessary to consider the dog's medical history, determine the presence of crucial clinical signs, and then confirm the disease with laboratory tests.

When there is a suspected ulcer, the vet should do initial tests, such as:

Complete blood count – It is a proven way to diagnose anemia, increased white blood cells, or reduced number of platelets.

Biochemistry profile – It includes necessary serum chemistry analysis and urinalysis, which will allow differentiation of underlined cause, primary gastrointestinal disease, and secondary infection. These blood tests measure the level of electrolytes and enzymes in the blood and urine.

Endoscopy (gastroscopy) – Since it reveals the presence of ulcers in the gastrointestinal tract and allows taking a tissue sample for a biopsy, endoscopy is an essential method for definitive diagnosis of ulcers. By using an endoscope, the vet will have a direct look in the stomach and duodenum and take some photographs.

X-rays and Ultrasounds – The vet will use these methods to identify foreign objects and tumors in the gastrointestinal tract. Unfortunately, they can't confirm the presence of ulcers in the stomach.

If necessary, it is possible to use some other tests if there is suspected presence of a specific secondary disease. For this purpose, the following analyzes can be done:

Treatment of Stomach Ulcers in Dogs

Consultation with a veterinarian is required before any treatment is started. The goal is to cure the underlying cause, which led to the appearance of a stomach ulcer and provide relief to the dog by relieving symptoms.

That includes the immediate discontinuation of therapy with glucocorticoids and NSAIDs. Also, it is necessary to provide sufficient fluids and even blood transfusion in cases when the gastroduodenal ulcer is followed by:

Besides, the usual therapy of this condition will depend on the reasons that led to it, and usually include medications that will regulate the level of stomach acid.

Cytoprotective agents – They neutralize gastric acid and promote the production of gastric prostaglandin.

Gastro-protectants – They reduce the production of gastric acid, relieve pain, reduce inflammation, and help the body heal itself.

Antibiotics – They are a crucial solution in the case when a bacterial infection is a reason of ulceration.

Surgery – It is a recommended procedure when the ulcer perforates the wall of the stomach.

Natural remedies or supplements – There is also a possibility of using some alternative medicine to relieve pain and improve the overall condition of the dog, such as:

Consultations with the vet are recommended before applying these products.

Unfortunately, there are no precise incidence records of the frequency of stomach ulcers in dogs. The fact is that the rate of gastric ulcers increases nowadays because of uncontrolled or poorly controlled prescription of certain drugs for dogs.

Proper nutrition, moderate exercise, a peaceful life without stress, and avoiding unnecessary use of NSAIDs are usually enough to prevent the occurrence of gastric ulcers in dogs. Once it appears, appropriate therapy will solve the problem in most cases.

READ NEXT: 11 Stomach Problems in Dogs – Causes and Treatment