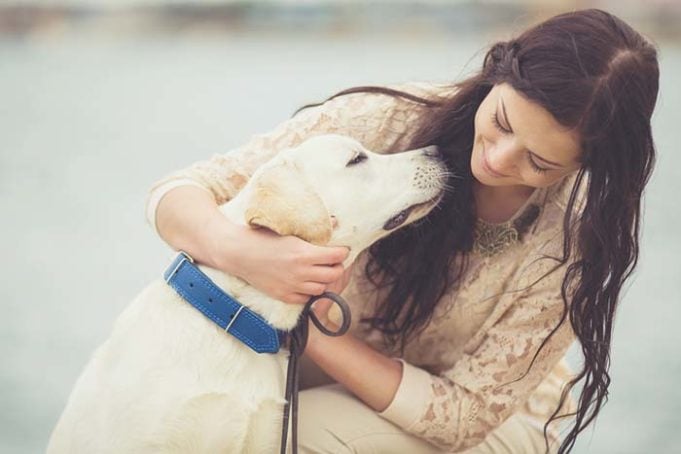 New study found how oxytocin in dogs affects their friendliness, which can also broaden our understanding of canines bond with humans, and human social functioning.

Ever notice how some dogs seem friendlier than others and show more willingness to interact with their humans? Scientists say that this behavior can be linked to genetic variations in a hormone called oxytocin. Experts from the Linköping University in Sweden looked into this behavior among 60 Golden Retrievers and their owners. They published their findings in the journal Hormones and Behavior.

“The results lead us to surmise that people selected for domestication wolves with a particularly well-developed ability to collaborate, and then bred subsequent generations from these.”

A Boost of Oxytocin

In conducting this new study, researchers briefly trained the dogs to open lids in exchange for treats. They also gave the dogs’ additional challenges by firmly shutting some lids to make it nearly impossible to unseal. The researchers also sprayed oxytocin solution onto the noses of one group of dogs. A separate control group of dogs, on the other hand, received salt-water spray.

The experts timed each attempt the Golden Retrievers made to open the lids and also took note of when the dogs sought help from their owners, who have been standing nearby. The findings showed that the group of dogs sprayed with oxytocin attempted to seek help from their owners more often than the control group with the salt-water spray.

However, the researchers also swabbed DNA samples from the dogs' inner cheeks to study how oxytocin affected their genetic variation. As expected, the more receptive dogs in the first group had a particular gene variant that became more active because of the hormone's presence.

RELATED: The Science Behind Oxytocin and Puppy Love

But What is Oxytocin?

Humans naturally produce oxytocin from the brain. Also called the “love hormone” or the “cuddle hormone,” oxytocin influences human bonds between a mother and child, social interaction among friends or family, and sexual attraction between couples. It builds on feelings of trust and empathy.

A behavioral study of children with autism spectrum disorder made use of oxytocin spray to impact their social functioning. Experts learned that a burst of the substance normalized part of their brain and made them more responsive to other people. The kids were also able to process and recognize social cues better.

How Does this Relate to Dogs?

Because oxytocin is a mammalian hormone, dogs also release this naturally in their brain but with varying effects as well. One study from 2016 showed that oxytocin affects dogs more than cats. Other studies also implied that some breeds of dogs have more active oxytocin receptors than others. It explained the differences in the dog's affection or loyalty for its owner.

According to experts from the University of Helsinki, dogs with more active oxytocin look at their humans with love and longing and steal their owners’ hearts.

It's Been this Way Since Thousands of Years Ago

Now, the Linköping experts also analyzed 21 DNA samples from wolves and saw similarities in their genetic variations with the group of dogs sprayed with oxytocin. This suggested that the dog’s wild ancestors had this particular active genetic variation thousands of years ago when man first attempted to domesticate canines.

According to the researchers, this perhaps explains why humans picked wolves to domesticate among other animals because of its willingness to collaborate with them as impacted by the oxytocin. Researchers concluded that as oxytocin is vital to human interaction, it is also vital to animals and their social skills.

Why is this Finding Important?

We learn a lot about human behavior by studying the behavior of other animals, according to the experts. Studying dogs would be particularly helpful because of its closeness with humans, compared to other animals.

In understanding human physiology and social functioning, some clues could apparently be picked up from a person’s interaction with a dog. Further research, however, must still be done to identify the differences in the genetic variations that oxytocin affected.

READ NEXT: Dogs Know Exactly When to Break Out the Puppy Eyes