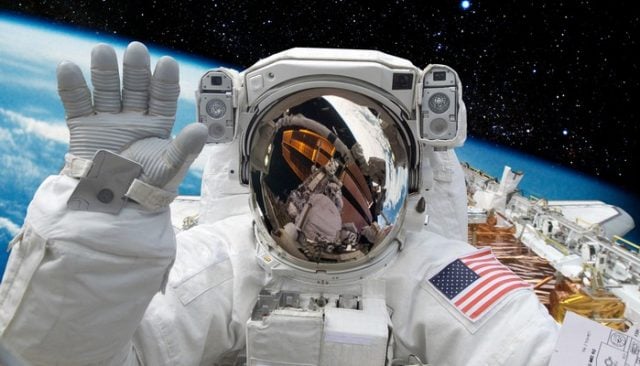 Leland Melvin is living every young man’s dream as an astronaut and former professional football player. On top of this, he makes sure people know who his two best friends are – his dogs. He even made sure his canine companions were in his official NASA portrait!

Melvin has been living the dream, and now he is sharing his success by encouraging and teaching children to study math and science. He recently posed for his official astronaut photo for NASA with his two best friends, his canine companions.

Leland’s story is inspiring for everyone and after achieving so much success, he is still helping people. His dogs seem to have quite a bit of fame too. Apparently, Leland felt his dogs needed training because they were becoming overly protective of him. They were on the Cesar Chavez show The Dog Whisperer. They learned how to be less aggressive toward strangers, as they were very protective.

If this picture of an astronaut and his dogs doesn’t make you smile and run to the nearest adoption center to get a dog, we don’t know what will! The love between humans and dogs is so inspiring and genuine, it truly does make the world a better place.

If there is something we can learn from Leland’s story, it’s how he is using his success to help children and to show his love for animals. He played for the Dallas Cowboys and the Detroit Lions but that wasn’t enough for him.

He knew he could do anything he put his mind to, and he set his mind to becoming an astronaut. He started flying to space in the shuttle Atlantis. After that, he became the head of education for NASA’s children’s program.

Melvin certainly has lived an interesting and exciting life that most people could only dream of. Hopefully his story inspires you to work hard for your dreams and believe in yourself. If this man can do it, so can you!

Leland’s dogs are a big part of his life too and he’s not afraid to show it. Leland is just a cool dude. He’s inspiring and teaching children, and clearly he’s a responsible and loving pet owner. If your dog is having behavior issues, consider calling a dog trainer to help like Melvin did.

If your dog is aggressive, barks too much or won’t listen to you, a trainer who really understands dogs can help you have a better bond with your pet. Don’t give up on him, his behaviors can change and your friendship with him can become much more peaceful and rewarding just like Melvin’s.

Taking the time to train your dog and understand the best ways to help him learn good behaviors can make pet ownership much more enjoyable. Instead of cleaning up after your dog’s messes, you will have a healthy bond with him in which he knows how to please you and enjoy the rewards you give him for good behavior. Dogs need training in order live a happy life, and luckily there are many professionals ready to help you learn simple ways to get your dog to listen.