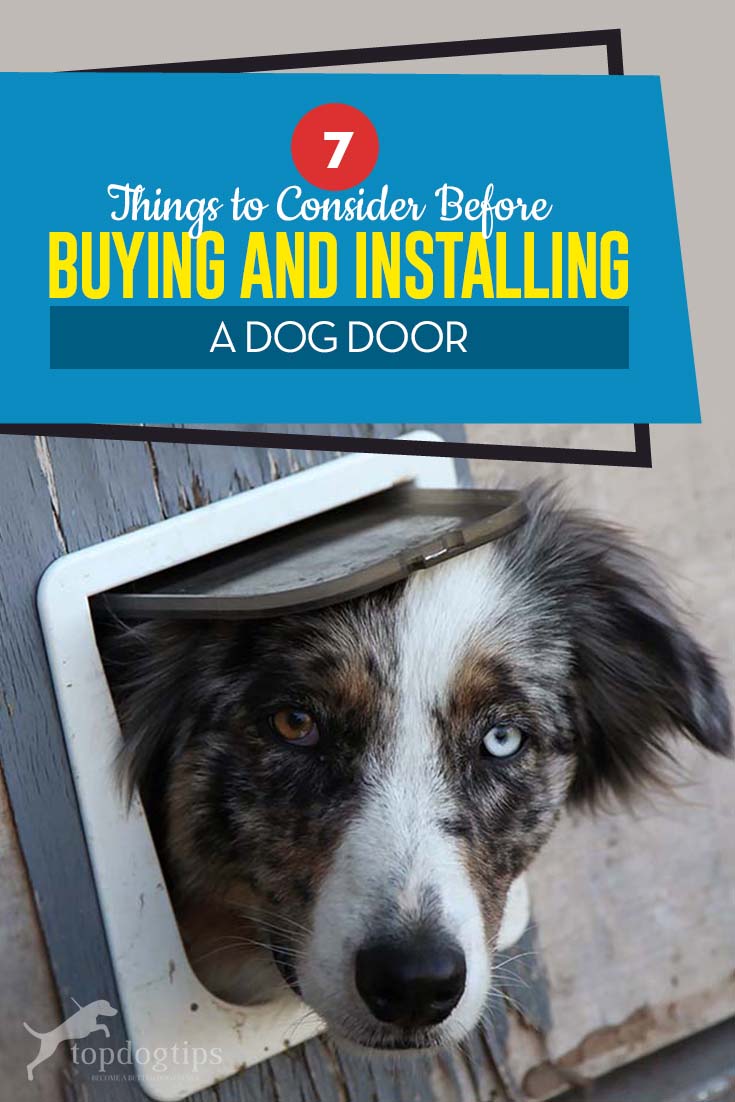 Whether you’ve got a pup that’s extremely active or one who loves to drink lots of water and needs frequent bathroom breaks, the idea of a dog door starts to sound pretty appealing when you consider the benefits. Pet owners who work the night shift or irregular hours, or simply cannot be bothered with letting a dog in and out all the time, might want to give their pet a chance to go outside on their own schedule.

On the list of dog supplies you might need to consider getting for your pooch, a dog door is rarely at the top but it does provide a ton of benefits and has many advantages. However, you must also look at the cons of installing a dog door in your home, and consider a few other aspects of this approach before buying one.

ALSO SEE: The 40 Best Dog Doors for Walls and Doors

While it's unlikely someone can enter your home through a dog door, the bigger issue is your pet going outside alone and getting stolen.

It's wonderful to know that you can go to work without coming home to a mess, or worrying about your pup holding their bladder for too long. Small dogs are known for needing frequent potty breaks and sadly they’re also the easiest ones to steal. However, small breeds aren't the only ones who wind up missing.

To combat this issue after you install a pet door, consider getting a surveillance system just to be sure that if something does happen, you have evidence to provide to the authorities. In addition to human prowlers, those who live in states such as Florida where large reptiles crawl into people’s pools and homes during the seasons may want to reconsider a dog door. 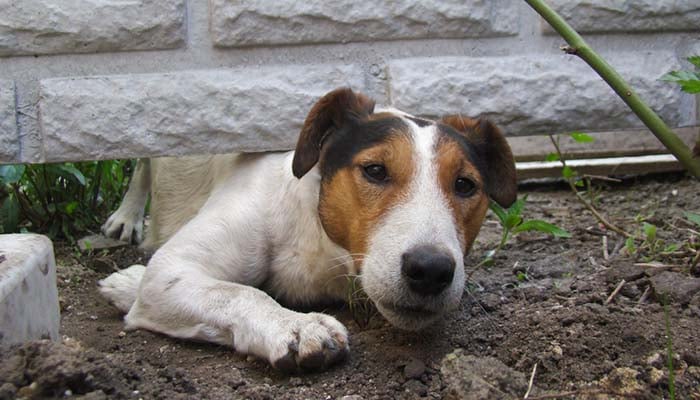 Sometimes dog doors aren’t such a great idea, especially when you’ve got a pup who's an apt escape artist and loves to dig underneath fences. Thankfully, there are dog doors available that contain a moving plastic or metal piece that works as a barrier. As long as it's shut, you don’t have to worry about your pup taking off through the neighborhood.

Just remember, our canines are a lot smarter than they let on sometimes. They watch you open and close a pet door everyday, and eventually they very well may figure out how to do this themselves. So if you’ve got a definite runner and you're worried the pup might escape, keep a lock on on your dog door, and train your pooch how to stop digging.

3. If You Live Below Sea Level, Consider Water Seepage

Living in area such as Houston, Texas or many cities in Louisiana might put a damper on your hopes for a dog door. These regions are known to be hot, humid and swampy, which is almost always accompanied by yearly flooding.

Even if it doesn’t flood, living below sea level means that heavy rain call fill up the street rather quickly. Pet owners that reside in regions where water rises regularly through the summer or autumn's hurricane season should have their dog door built high up, preferably above a deck or somewhere that moisture won’t leak through the edges. 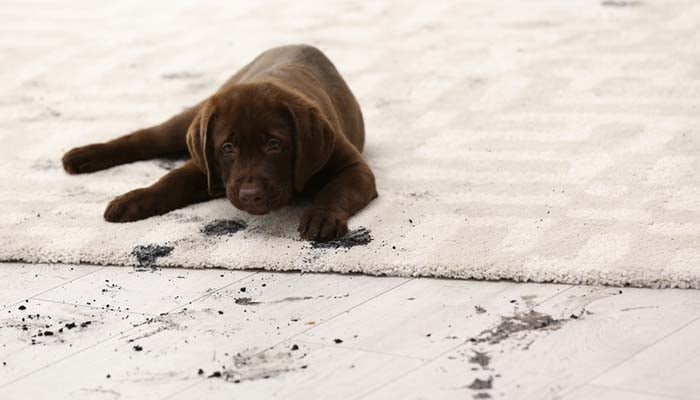 Since they’ll likely be roaming in and out freely as long as you leave the canine door accessible, that traffic brings in quite a bit more dust and dirt, especially in winter. It's not a biggest con and there are ways to tackle this issue. At the very least, consider adding floor mats on the inside and the outside of the entrance to the doorway.

Another little tip would be to invest in a cheap dog doormat, or even better – a cat litter mat. It sounds silly, but they’re built to hold dirt and whatever else comes in on your dog’s paws, and are much better at this than regular doormats. If your mat starts looking extra dirty, simply take it outside and shake it out into the grass, or give it a quick wash.

Just because it's designed for dogs, that doesn’t mean other animals in your household won’t learn how to use the door. Cats are natural born predators and will find ways around things like a door when they're on a hunting mission. If you’ve got a cat who likes to romp around, it's wise to put a bell on them so you know where they are, though it still won't solve all of your problems.

This might be an issue with some dogs, but felines in particular are likely to bring you gifts from the outside. Small prey such as birds and squirrels are sure to fall victim to the sharp and deadly claws of your kitty. The next thing you know, they’re dropping dead bodies under the couch, in the kitchen, under your bed pillow, and wherever else they know you’ll eventually find it.

When it comes to dogs, unless yours is unique to the many trash compactor qualities that most canines have, it wouldn’t be a surprise if your pooch decided to chow down on some delicious, free corpses lying around. Otherwise, the Fido might bring their own “gifts” from the nearest trash cans, something they consider either food or a very smelly toy.

Speaking of others using your dog door, your human little ones will most likely be curious about their best friend’s special new way to get outside. Infants and toddlers should never have access to the dog door due to various dangerous it presents.

Small children who are old enough to speak and comprehend should be introduced to this interesting new contraption, if only to help them understand that it's for Fido only, and that they can get “ouchies” and “booboos” if they try to crawl through it.

Anytime children and pets share a home, it's better to familiarize them with the way things work. Kids who attempt to play with their dog through the door could accidentally be bitten or stepped on. This is a new situation for everyone, your pup and your tot still need time to get used to the rules. 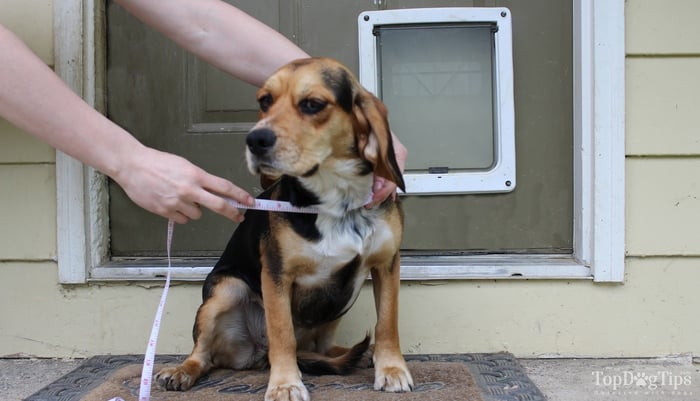 7. Be Sure Your Pet Can Actually Fit Through a Dog Door

Getting stuck in anything isn’t a fun feeling, but it's less fun when no one is home to help you get out of the literal bind you’re in. Before you even begin the process of installing a pet door, measure the width of your dog’s chest from shoulder to shoulder; this is the widest part of their body. You’ll also need to measure their height so that they can make it through without having to bend or shift awkwardly.

Overall, a doggy door can be extremely beneficial to both dogs and their owners. There are some cons to consider, but provided you're aware of and prepared for them, things are most likely to go smoothly.

The above are just some cautionary tales to ensure that everyone in your household are prepared and that your pup can safely make the transition, and that nobody would have any unexpected surprises. Your dog might not want to use it right away, but after a week or two they should start feeling a little more comfortable with their personal door.

READ NEXT: How to Measure for a Dog Door and Choose the Right One