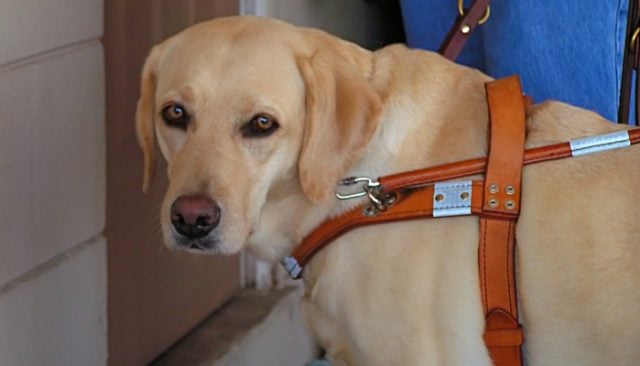 This 10 year old boy has autism and down syndrome, and his life changed when he got his therapy dog. Jonathan is an adorable boy that has been given a gift. His dog, Shadow, which came from an organization called North Star has given him a friend and constant companion.

The dog is trained to be especially good to children. Jonathan's parents first considered getting him a therapy dog after they read about how much one could help their son. Jonathan wasn’t able to make friends easily because he doesn’t say many words and is overwhelmed in social settings.

The boy was very independent as well, spending most of his time with his parents at their house. Things brightened up when Shadow came into their lives. It allowed the boy and his dog to start growing up together. Shadow now goes everywhere with them.

RELATED: Therapy Dog Training: How to Get Your Dog Certified

Jonathan now wants to be with the dog all the time and really enjoys Shadow's company. He even added one more word to the only two words he usually spoke, which were mom and dad. Now he says ‘Doe,' the term he uses to refer to his best friend.

Many of us consider therapy dogs to be for older people as companions or to assist them with things, but the emotional benefits of a therapy dog are amazing for children with special needs.

North Star is a great organization that works to pair therapy dogs with children. One of their goals is to raise dogs to think of the children as their owner. They have a special way of training the dog that can help the child feel the connection of a relationship.

Being able to have someone to play games with – that don’t require speaking or competing with each other – is truly a gift. Shadow is a loving companion, and if Jonathan isn’t around Shadow, he is asking about him.

Hopefully when you see the pictures of this adorable 10 year old and his therapy dog, you will be inspired to help spread awareness about how therapy dogs can be there for children with special needs. Everyone needs a pal and especially those of us that have extra challenges to work with. Word of mouth is a great way to share good ideas that are making people’s lives better.

Do you know someone with a child with special needs? Perhaps it would be nice to share this story with them. You could also bring it to local schools and share it with the staff who could then share it with parents. Therapy dogs are becoming more well known, but some people may have never considered it an option.

RELATED: Service Dogs: What You Need to Know

Historically dogs were working dogs. They helped with chores, herded cattle, moved fishing nets and trapped rodents. Dogs like to have a purpose and can be trained to help humans. Think of all the animals sitting in shelters without a home that could be helping special needs children. Maybe you will be the one that connects them to a home for life.