Many years ago, I decided to breed a litter of cocker spaniels. I had a solid-black female with a good pedigree, and after some searching, I found a black male with a little spot of white on his chest with a similarly good pedigree.

Chas delivered six puppies — five solid black puppies and one blond. Blond? How had that happened?

I had made certain that she “interacted” with no other dogs, but here was the evidence. She had a blond puppy. Once I did a little reading, however, I determined she was not a free spirit (or at least, not allowed to be a free spirit). The research led me to the field of genetics.

I can hear it now — flashbacks to middle school: “Why do I have to learn algebra? I’ll never use it.” Well, admit it — you do, and often. Balancing your checkbook requires algebra; comparison shopping requires algebra, and there’s much more.

I learned a little bit about genetics in a biology class in high school, but clearly did not retain the information thinking that I would never need it again. Little did I know, I would be researching it again years later. Once you understand the basic principles of genetics, you can use it too — maybe not every day and maybe not in depth, but you’ll know enough to get by when you need it.

Canine Genetics: How to Make a Dog

This is a very, very simplified explanation (because that’s the only kind I can give). Hopefully, you’ll take away from it some understanding of the problems that can occur with the offspring of matings of both purebred dogs and mixed breeds as a result of the genes they inherit.

Genes live in the chromosomes (which are in the nucleus of the cell), and each chromosome joins another chromosome to make a pair. All living things have chromosomes — each dog has the same 38 pairs of chromosomes in each of the millions of cells in its body, and the makeup of the cell’s chromosome pairs is the same in almost all of its cells.

RELATED: How to Start a Dog Breeding Business

Genes control how the dog looks, how it sounds, any genetic diseases it might be predisposed to, its life span, its potential to go blind, its potential for conditions like hip displasia, and to some extent its personality — everything you can think of.

Note that I said “… the same in almost all of its cells” a couple of paragraphs above. The 39th chromosome is different, and its difference is what we’re concerned with. (The blood cells are also a little different, but that’s not important here.)

The 39th chromosome controls gender and inherited genetic makeup, and it’s not active anywhere other than in the cells used for reproduction. This chromosome does not contain chromosome pairs but rather a random mix of half of each chromosome pair in the rest of the cells. In males, this is the sperm, and in females, the egg.

At conception, the father’s sperm will combine with the mother’s egg to make offspring whose cells contain one-half of the mother’s randomly selected chromosomes and one-half of the father’s randomly selected chromosomes. The combination of each parent’s half becomes the chromosome pairs in its offspring’s cells, its offspring’s genetic makeup, and it’s a roll of the dice as to what the genetic makeup of each puppy will look like as a result of that combination. The combination, unique in each puppy, causes the differences seen in siblings.

RELATED: Should You Breed Your Dog?

Remember, this is a very basic explanation. In reality, there are all sorts of dominant-recessive issues. In addition, few, if any, chromosomes affect only one thing, and few things are controlled by only one chromosome. But we’re taking baby steps here, and this generality will do.

You want a puppy. In fact, you’ve already named your new puppy Coco. But you want a blond puppy, and since black is the dominant color, two black dogs will have only black puppies, right?

Not necessarily. Look at Chas’ litter above. To figure out what coat colors will be available in this litter, you need to go back to Coco’s grandparents. 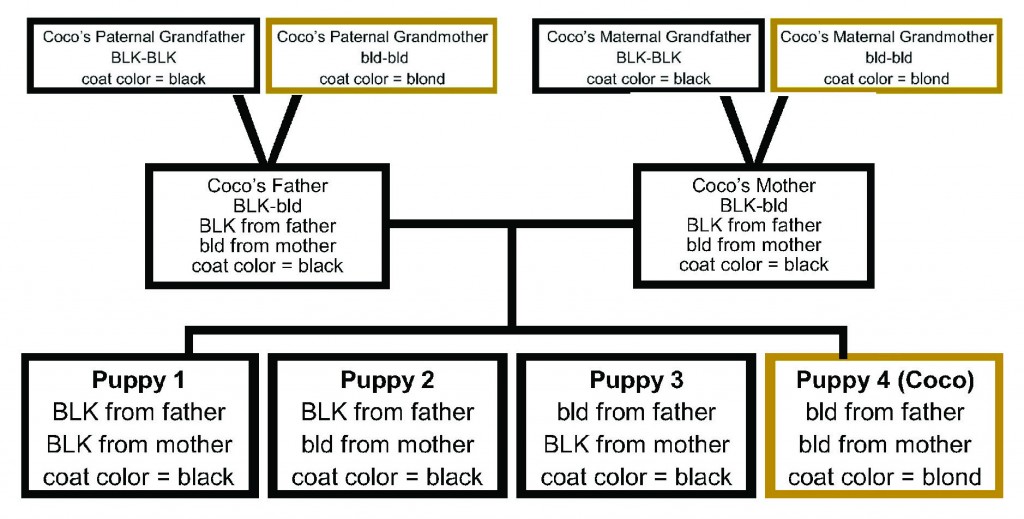 Of course, this is only an approximation of the breakdown of dog's coat color in any single litter. Over many litters from this same mating, however, this ratio should hold true. And there may be more than four puppies in the litter in which case the ratio will still be approximately three-quarters black and one-quarter blond.

Not only do genes control relatively unimportant things like coat color, they also control genetic conditions that can cause disability or death. Now that you know how genes combine to produce certain traits, you can use this knowledge to understand some of the problems of purebred and mixed-breed dogs.

RELATED: Where to Buy Puppies?

In these cases, the chances of breeding dogs carrying undesirable recessive genes are far greater. There are fewer mates to choose from, and the genetic makeup of the mating dogs will have less variety because of the limited number of genetic combinations available. It’s not impossible for all dogs in a small population to carry the same recessive genes, which they’ll then pass on to their offspring.

The same thing applies to mixed breeds except that the number of mates they can choose from is larger because they’re not limited to mating within their breed. In a small geographical area though, it carries the same kind of risk as that for purebred dogs.

Just as in the coat color chart, we’re going to pick a sire and a dam who each have a dominant gene for NC and a recessive gene for fc. How will their litter turn out?

One-quarter of the puppies will have a NC-NC gene combination. They’ll be healthy and have no chance of passing on the fc gene to their offspring.

RELATED: Do Dog DNA Tests Work? How Accurate Are They?

While dangerous, these matings can be okay if done very carefully by someone who knows what they’re doing when it comes to genetics. Even so, the resulting litter will contain more than the average number of culls (puppies that aren’t acceptable for one reason or another). Culls are usually destroyed.

If you're interested in breeding your dog, you should seriously consider this information and look into your dog's genetic history before you make your decision. You should also think about genetics when you are shopping for a puppy. Make sure to meet the parents and ask to see vet records. If the breeder will give you the information, you may even want to call the veterinarian and ask some questions yourself.

It's better to be diligent about your puppies health and well-being now. If you're not, you could end up with a very ill dog and a lot of expensive bills in the future.