This is a big question, one that begs for disagreement among dog lovers. Should you breed your dog? Each side of the argument certainly has its own pros and cons. In order to fully understand both sides of this debate, you first need to understand the different types of breeders and why they choose to breed their dogs.

There are four types of dog breeders.

Breeders that breed their dogs for show are generally looking for conformation to breed standards. Those in a litter that are the most likely to be contenders in a dog show are kept or sold to like-minded show people, and the remainder are sold. There are buyers who want purebred dogs from a show breeder, hoping they’ll get a show-quality dog, and many just want a purebred dog.

Hobby breeders generally breed for the love of dogs in general and for their chosen breed in particular. They may have a small kennel and sell their dogs through their kennel or directly to buyers. It’s not a particularly lucrative operation. They are also the source of many of the “designer” dogs. Technically, these dogs are hybrids — dogs whose parentage is purebred, although not of the same breed, like Labradoodles (Labrador/Poodle) and Chahweinies (Chihuahua/Dachshund).

Commercial breeders have large operations and sell primarily to pet stores and dog brokers. Some commercial breeding operations have come under fire for their mistreatment of the dogs they are breeding and the resulting puppies who often have health problems, both genetic- and disease-based.

These breeders are now generally known as “puppy mills” and are or should be the subject of government inspection. True dog lovers never buy from pet stores, the biggest recipient of commercially bred puppies. Instead, they should or do take the time to educate those who may not have knowledge of commercial breeding operations.

But you’re none of these. You want to be what the show circuit scornfully calls “backyard breeders” and what I refer to as “casual breeders.” You want to breed one or two litters with the family pet, whether it’s a purebred, hybrid, or mongrel. Or, as is often the case, your dog and the neighbor’s dog had an unplanned social outing, and you bend to the inevitable. You have no plans to produce more litters or acquire more dogs to breed.

You also have little knowledge of whelping (assuming your dog is the female, which it usually is in this type of breeding), nor do you know much, if anything, about the proper care of the bitch and the newborns. So what are your reasons for breeding your dog and should you even be considering breeding your dog in the first place?

Should You Breed Your Dog?

The reason that I hear most often is “I want my children to see the miracle of birth.” Chances are, unless your children are old enough to experience the miracle of birth themselves, they will be left with only a very disturbing and often misunderstood memory. The picture that will stick with your child is the sight of blood — and lots of it — along with other generally unidentifiable bodily fluids.

RELATED: Where to Buy a Dog: Responsible Adoption

And the puppy that emerges is not the fuzzy, cute, cuddly baby you think of when you visualize puppies, but rather a slimy, sac-covered, blind, rat-like being who only a mother could love. In some cases, the dam doesn’t clean the puppy, and to save it. You have to clean off the slime, clear the nasal passages so it can breathe, massage its chest to stimulate and regulate its heartbeat, and massage its genital region to encourage it to suckle.

Despite your best efforts, the puppy is still likely to die. In fact, it is quite common for puppies to be still born or die shortly after birth. Is that something you'd want your child to witness? Most children are unable to see the miracle in this and come away with horrific visions of the reality of what their canine friend has just gone through.

Breeding is expensive too!

Running a close second among popular reasons for breeding dogs is the opportunity to make some money. If this is your plan, you are sadly mistaken. Breeding is a very expensive hobby. You have to buy the best food and supplements to ensure that your bitch is healthy and ready to carry and nurse a litter of puppies.

And the money outlay doesn’t stop there. A whelping box where your bitch can deliver the litter and where the puppies can live safely for the first three to four weeks of their lives is a necessity. I’ve seen whelping boxes on sale for as little as $100, but those aren’t suitable for the bigger breeds. There are online plans for making one, but they require that you be handy with a saw and hammer and you'll still need to pay for the supplies. A safe whelping box can be difficult to build, and the necessary supplies aren’t cheap.

RELATED: Adopting a Puppy? You Will Need These Puppy Training Supplies

You’ll also need a heat lamp or special heating pad immediately after whelping and for the first few days to keep the puppies warm and you'll need to provide nesting material as well. And that’s still not it.

The expenses don’t stop when the puppies are born. Quality bitch’s milk supplement or substitute, if needed, is expensive. So is quality puppy food because puppies can’t eat the same food usually given to their adult mother, who will need a more nutrient-packed and expensive food while she’s pregnant and afterwards while she’s nursing.

The puppies will also have their own vet visits — for immunizations, deworming, and any quasi-surgical procedures called for by the breed standard. These procedure could include tail docking or ear clipping. If you don’t want to alter the puppies’ bodies to satisfy breed standards, they may not sell as easily.

Make a little money? You won’t break even…assuming you are able to sell all the puppies except the one you want.

What Will You Do With the Pups?

The final and most important factor when deciding if you should you breed your dog is what you will do with the puppies. Some breeds generally have only a few puppies in a litter, and other breeds tend to give birth to upwards of 10 puppies at one time.

Even with breeds that have small litters, it’s doubtful that you will want to keep all of them, except that those children you traumatized with the miracle of birth will want to keep every one of these small, fuzzy, big-eyed babies. You’ll know you’ve lost when they name them.

Seriously, what will you do with the rest of the litter? Sell them? Before you sell, there are a number of issues to consider. Does your buyer have references (preferably a veterinarian)? Will you require the new owner to return the puppy to you if they are unable to keep it? And finally, are there enough people who want to purchase a puppy or want a puppy at all, even if it’s free?

Not to mention that fact that many states require you to have a breeders license in order to sell puppies. You didn't think of that? You can find more information on the Animal Welfare Act and what constitutes being a puppy ‘dealer' on the United States Department of Agriculture's website.

If you're unable to sell the puppies, that leaves you with a couple of choices: Keep and raise more puppies than you want, which will result in a bigger mess and less attention to each dog, or leave them at a shelter, a heartbreaking and unacceptable decision.

Now for the opinion part: Although I don’t like government interference, this is one area in which I think it’s important. Some organization needs to regulate the show-circuit, hobby, and commercial breeders for the health of the puppies and the safety and health of the breeding pair, but do they need to regulate casual breeders?

I don’t know. I want to think that the one-time, casual breeder will be responsible, knowledgeable, and loving toward the bitch and the newborns, but I’m sure that doesn’t always happen, especially with an unplanned pregnancy. Through ignorance of the whelping process, the basic care of both dame and newborns, and the difficulty placing the puppies other than the one you want to keep, I’m sure some puppies are inadvertently harmed.

Some areas of the country fine or increase the tax on fertile dogs. Some require inspections of the breeding premises, and some forbid breeding altogether without a license. Perhaps requiring education to accompany the license to breed will help solve the problem? After learning of the difficulty and expense of the process and of the puppies, the casual breeder might change his mind.

But I don’t think that will solve the whole problem. There will always be some people who think the rules don’t apply to them or they already know what to do and will go ahead with their plans to breed.

Should you breed your dog? That's up to you. I’m not going to say I would forbid casual breeding altogether — I was a casual breeder. However, I think it takes all dog lovers to monitor their friends, neighbors, and acquaintances who have decided to breed their dog. Offering advice is helpful although not always received well. And I would not hesitate to call the animal control office in your area if you suspect neglect or abuse. 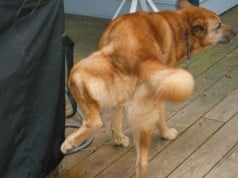